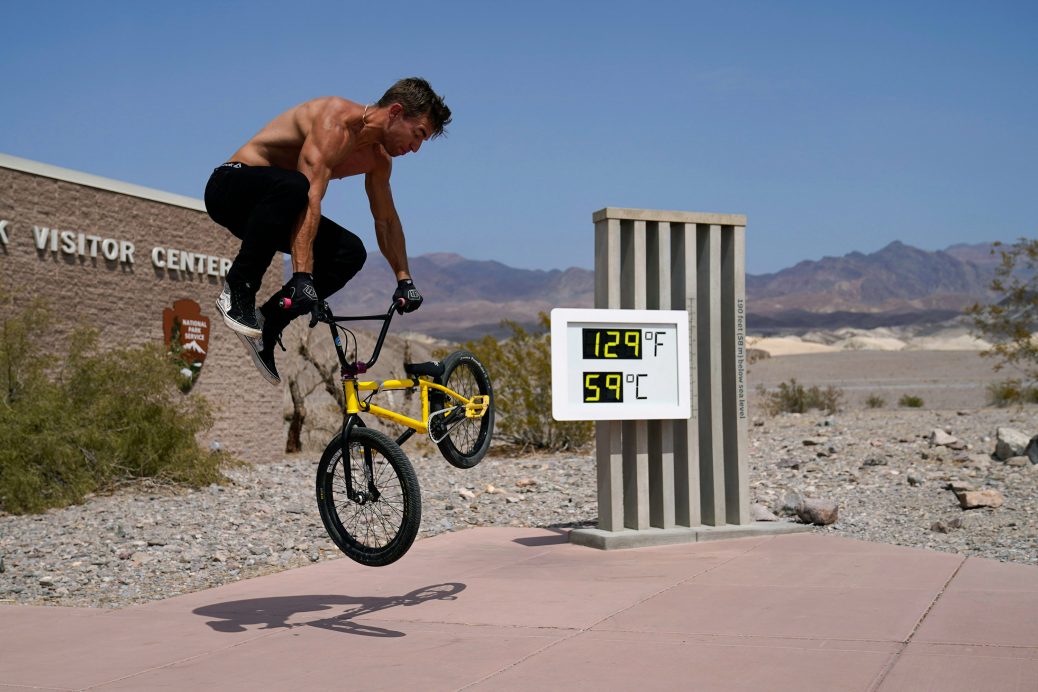 As record-breaking heat waves baked Californians last month, the collective strain of millions of air conditioners forced the state’s grid operators to plunge hundreds of thousands of households into darkness.

The rolling blackouts offered just a small hint of what’s likely to come in California and far beyond. Growing populations, rising incomes, increasing urbanization, and climbing summer temperatures could triple the number of AC units installed worldwide by midcentury, pushing the total toward 6 billion, according to the International Energy Agency’s Future of Cooling report.

Indeed, air conditioning represents one of the most insidious challenges of climate change, and one of the most difficult technological problems to fix. The more the world warms, the more we’ll need cooling—not merely for comfort, but for health and survival in large parts of the world.

But air conditioners themselves produce enough heat to measurably boost urban temperatures, and they leak out highly potent greenhouse gases too. Plus, those billions of energy-hungry new units will create one of the largest sources of rising electricity demand around the world.

Without major improvements, energy demand from cooling will also triple, reaching 6,200 terawatt-hours by 2050—or nearly a quarter of the world’s total electricity consumption today.

Despite the magnitude of the mounting challenges, there has been relatively little funding flowing into the sector, and few notable advances in products in the marketplace. Aside from slow gains in efficiency, the basic technology operates much as it did when it was introduced nearly a century ago.

“The fact that window AC use continues to increase while the product largely looks and works the same as it has for decades speaks for itself,” says Vince Romanin, chief executive of San Francisco–based Treau, a stealth cooling startup developing a novel type of heat pump. “I think a lot of folks are excited for something new here, but there has only been incremental progress.”

There have been far larger improvements in costs and performance across other energy technologies in recent decades—like solar panels, batteries and electric vehicles—driven by public policies, dedicated research efforts and growing demand for cleaner alternatives. Treau is one of a number of startups and research groups now trying various ways to achieve similar advances for cooling.

But even if the global stock of AC units do become much more efficient, the projected leaps in usage are so large that global electricity demand will still soar. That will complicate the already staggering task of cleaning up the world’s power sectors. It means nations don’t just need to overhaul existing electricity infrastructure; they have to build far larger systems than have ever existed—and do it all with carbon-free sources.

Perpetually cooling the vast volumes of hot air that fill homes, offices, and factories is, and always will be, a massive guzzler of energy.

The problem isn’t merely that more air conditioners will require ever more electricity to power them. It’s also that they’ll particularly boost the amount that’s needed during peak times, when temperatures are really roasting and everyone’s cranking up their AC at the same time. That means we need to overbuild electricity systems to meet levels of demand that may occur only for a few hours of a few days a year.

In Los Angeles County, rising temperatures combined with population growth could crank up electricity demand during peak summertime hours as much as 51% by 2060 under a high-emissions scenario, according to a 2019 Applied Energy study by researchers at Arizona State and the University of California, Los Angeles.

That adds up to about 6.5 additional gigawatts that grid operators would need to be able to bring online at once, or the instant output of nearly 20 million 300-watt solar panels on a sunny day.

And that’s just for one of California’s 58 counties. The world will see far larger increases in AC demand in nations where the middle class is rapidly expanding and where heatwaves will become more common and severe. Notably, the IEA projects that India will install another 1.1 billion units by 2050, driving up AC’s share of the nation’s peak electricity demand from 10% to 45%.

The most crucial fix needs to occur outside the AC industry. Transitioning the electricity grid as a whole to greater use of clean energy sources, like solar and wind, will steadily reduce the indirect greenhouse-gas emissions from the energy used to power air-conditioning units.

In addition, developing increasingly smart grids could help electricity systems deal with the peak-demand strains of AC. That entails adding sensors, control systems, and software that can automatically reduce usage as outdoor temperatures decline, when people leave spaces for extended periods, or when demand starts to bump up against available generation.

The world can also cut the direct emissions from AC by switching to alternative refrigerants, the critical compounds within cooling devices that absorb heat from the air. Manufacturers have largely relied on hydrofluorocarbons, which are highly potent greenhouse gases that can leak out during manufacturing and repair or at the end of a unit’s life. But under a 2016 amendment to the Montreal Protocol, companies and countries must increasingly shift to options with lower warming impacts, such as a class of promising compounds known as HFOs, certain hydrocarbons like propane, and even carbon dioxide (which at least has less of a warming effect than existing refrigerants).

There are also clear ways to ease the electricity loads required for cooling buildings, including adding insulation, sealing air leaks, installing window coverings or films, and applying reflective colors or materials on rooftops. Creating such “cool roofs” across 80% of the nation’s commercial buildings could cut annual energy use by more than 10 terawatt-hours and save more than $700 million, according to an earlier study by the Lawrence Berkeley National Lab.

But ultimately, the growing number of AC units operating in homes and buildings around the world need to become far more energy efficient to avoid what’s known as the coming “cold crunch.”

One of the most powerful tools for bringing about those improvements is public policy. The IEA notes that the best technology available is more than twice as efficient as the average of what’s actually in use around the world, and three times better than the most inefficient products on the market.

The problem is that most people and businesses aren’t going to pay a lot more for more efficient systems just to help achieve global climate goals, particularly in poor parts of the world. But with mandates, incentives, or subsidies, nations can help ensure that more of the units being produced and sold are higher-efficiency models.

The projected increase in cooling-related energy use shrinks 45% by midcentury under the IEA scenario that includes such policies (and doesn’t assume any technological advances).

Even then, however, AC energy demand would still leap about 70% higher by midcentury. That beats tripling. But achieving significant additional gains could require more radical changes.

A number of startups are trying to push things further.

Transaera, cofounded by MIT energy professor Mircea Dincă, is attempting to significantly improve efficiency by tackling the humidity in air as a separate step.

In addition to cooling ambient air, conventional AC units have to dedicate huge amounts of energy to dealing with this water vapor, which retains considerable heat and makes it feel much more uncomfortable. That requires bringing the temperature down well beyond what the dial reads, in order to convert the vapor into a liquid and remove it from the air.

Transaera’s approach relies on a class of highly porous materials known as metal-organic frameworks that can be customized to capture and cling to specific compounds, including water. The company has developed an attachment for air-conditioning systems that uses these materials to reduce the humidity in the air before it goes into a standard unit. He estimates it can improve overall energy efficiency by more than 25%.

Transaera is a finalist in the $3 million Global Cooling Prize, a contest designed to accelerate advances in air conditioning to reduce the climate impacts. The company is currently testing prototypes in India in partnership with a division of Chinese home appliance giant Haier.

Meanwhile, SkyCool Systems of Mountain View, California, has developed essentially high-tech mirrors that can cast heat into the cold expanses of space, taking advantage of a natural phenomenon known as radiative cooling.

The materials are designed to emit radiation in a narrow band of the light spectrum that can slip past water molecules and other atmospheric compounds that otherwise radiate heat back toward the planet.

Placed on rooftops, the materials can replace or augment traditional building cooling systems. The company estimates the technology can reduce the energy used to cool structures by 10 to 70%, depending on the configuration and climate. SkyCool is in the process of installing the materials at its fourth commercial site.

Other startups are exploring ideas like geothermal heat pumps, solid-state technology that avoids the need for refrigerant gases, and new twists on evaporative cooling, which usually relies on water-soaked pads to reduce air temperatures.

The good news is that some money is starting to flow into heating, ventilation, and air-conditioning. The research firm CB Insights tracked just eight financing deals worth nearly $40 million in 2015, but 35 totaling around $350 million last year. (This includes loans, venture capital investments, and acquisitions.) And there have already been 39 deals worth around $200 million this year.

But the bad news is that the increased level of funding is tiny compared with the tens of billions pouring into other energy and technology sectors—and minuscule relative to the scale of the problems to come.

This story was updated to add current information about SkyCool Systems, and correct the city in which it’s now based.