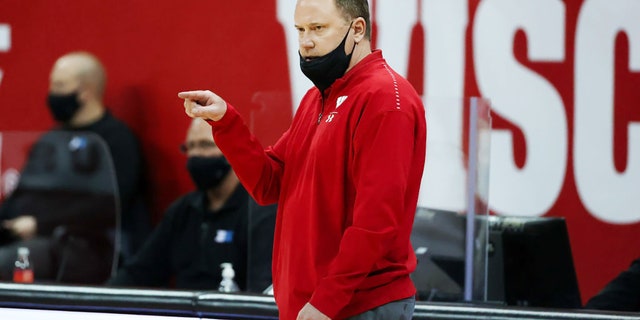 Wisconsin Badgers men’s basketball coach Greg Gard responded Tuesday after a secret recording of a meeting between him and senior players – in which the players confronted Gard and aired grievances – was leaked to a local newspaper.

In a statement, Gard said he has his “players’ backs” and was “fully committed to their development as basketball players, students, and young men.”

“I care deeply about the student-athletes in our program,” Gard said. “I want nothing more than to help them and see them succeed on and off the court. Our program has a lengthy track record of doing both. But the path to a championship or to graduation is not always easy. Sometimes there are setbacks. Difficult conversations have to be had. Sometimes people just need to get things off their chest.”

Gard added that he was “incredibly disappointed” that a private meeting between coaches and players was “secretly recorded, edited and made public.”

“It shows a complete lack of care for our program culture and for the confidentiality that is owed to our student-athletes who wanted an opportunity to share their thoughts behind closed doors,” he said.

The meeting took place Feb. 19 between Gard, the Badgers’ seven seniors, and three assistant coaches, reports said. It lasted more than two hours, and took place in the Kohl Center media room the day after a 15-point home loss to the Iowa Hawkeyes, according to the Wisconsin State Journal.

A roughly 37-minute, secret recording of that meeting was sent to the paper by an anonymous email, which included criticism directed at the head coach.

“I just feel like, coach, we don’t have a relationship,” said forward Nate Reuvers, a four-year starter on the team. “In my mind, it’s too late for that. I personally don’t think or feel like you care about our future aspirations.”

Head coach Greg Gard of the Wisconsin Badgers looks on in the first half against the Iowa Hawkeyes at the Kohl Center on Feb. 18, 2021, in Madison, Wisconsin. (Getty Images)

“I can’t talk to you. I just don’t want to talk to you. After this, coach, I don’t know what type of relationship we’re going to have, if we have one,” he continued.

Another player, Aleem Ford, alleged that Wisconsin promotes a family atmosphere in recruiting, but fails to live up to that promise. He called it a “kind of a lie and show.”

Guard Walt McGrory told Gard during the meeting that “I don’t know if I’ll ever talk to you again after this.”

“We don’t even talk here. I’ll avoid talking to you here, so why would I talk to you after I leave? I can’t hold a conversation with you,” McGrory said.

“He sat there, he listened and there was not one dry eye in the entire room at the end of everything,” an unidentified player later told the State Journal. “The biggest thing that he did at the end was he apologized again and he was in tears and he said, ‘It’s not your fault, it’s my fault.'”

It wasn’t immediately clear who recorded or released the audio — or if anyone was aware they were being recorded.

Wisconsin athletic director Barry Alvarez also released a statement, saying Gard and his staff have “my full support as they look toward the 2021–22 season.”

On Tuesday, Chris McIntosh – who is set to officially replace the retiring Alvarez – defended the head coach.

“In terms of going forward, Greg has our support,” McIntosh told the Milwaukee Journal Sentinel. “Does (this) make it easier for us? It doesn’t. But I think we understand what Coach Gard is all about and how much he does care about his players.”

“Our assessment of that takes place on a day-by-day basis over the course of years. Not one recording that was edited,” he added.

Wisconsin went 18-13 last season and lost to eventual national champion Baylor in the second round of the NCAA Tournament.