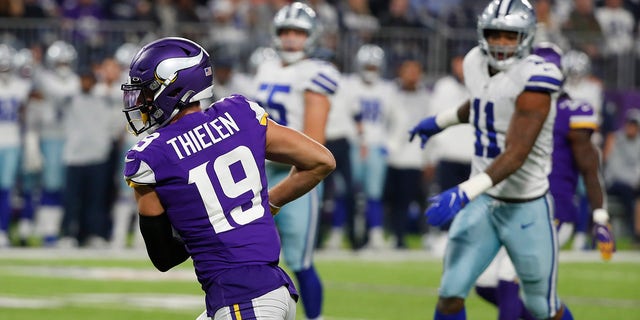 It was all set up for the Vikings on Sunday night.

They were at home against a 5-1 Cowboys team that was missing their star quarterback Dak Prescott. Cooper Rush got his first career start under center for Dallas and took advantage of the opportunity. Rush led Dallas on an eight-play, 75-yard touchdown drive in the closing minutes of the fourth quarter to win the game. Minnesota’s offense, meanwhile, couldn’t find the end zone after the first drive of the game.

It cost them, as receiver Adam Thielen pointed out after the game.

The Vikings offense finished the night with 278 total yards, with just 184 coming from the arm of quarterback Kirk Cousins. The offense looked like a rendition of the NFL during the 1980s. The deep ball was nowhere to be found for Minnesota. Cousins himself only attempted three passes past 15 yards. That’s not going to get it done in the pass happy NFL in 2021, and Thielen knows it.

It’s been a topical discussion of the team under head coach Mike Zimmer. The Vikings have had talented rosters for years but seem stuck in neutral. Now 3-4, Minnesota needs to get its act together to reach the playoffs.

In the stacked NFC, it’s gonna take Cousins having more freedom to throw down the field. That didn’t happen last night, and Dallas took advantage. With the loss, Cousins’ infamous primetime record moved to 8-17.