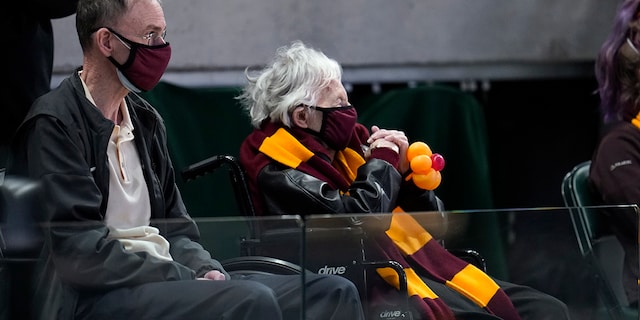 The Loyola Ramblers will take on the Oregon State Beavers Saturday afternoon but the team’s 101-year-old chaplain is already looking toward the Final Four.

“I’ll be jumping around, literally, not figuratively, I’ll be jumping around as much as they are,” Sister Jean said during a video conference with reporters Thursday, via ESPN. “It will just be a great thrill if they get to the Final Four again, or even go up a couple steps more. I will hardly believe that it happened. Last time, I thought to myself, ‘I will never see anything like this again.'”

She was referring to 2018 when she saw Loyola face Michigan in the Final Four.

“If we got this, it would be perfect,” Sister Jean continued. “They’re working toward it, and I believe they still can do it. One never knows what’s going to happen in a basketball game on the floor that night.”

Oregon State romped through the Pac-12 tourney and has lost only once in the last five weeks, but what they don’t have is Sister Jean.

Before defeating the No. 1 seeded Illinois, Sister Jean delivered an inspiring pregame prayer.

“As we play the Fighting Illini, we ask for special help to overcome this team and get a great win,” she said. “We hope to score early and make our opponents nervous. We have a great opportunity to convert rebounds as this team makes about 50% of layups and 30% of its 3-points. Our defense can take care of that.”

Sister Jean will travel from Chicago to Indianapolis Friday as the Ramblers prepare to take on No. 12 seed Oregon State.

Fox News’ Daniel Canova and The Associated Press contributed to this report.