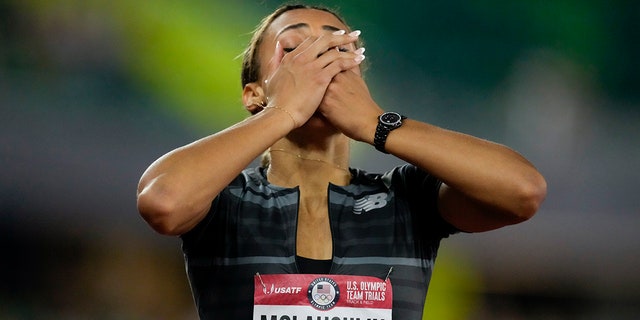 Sydney McLaughlin set a world record in the 400-meter hurdles at the U.S. track and field trials, finishing in 51.90 seconds.

McLaughlin bested the record of 52.16 set by second-place finisher Dalilah Muhammad, who crossed in 52.42. Anna Cockrell was third in 53.70. The trio will head to the Olympics in Tokyo.

GWEN BERRY TURNS BACK TO US FLAG DURING NATIONAL ANTHEM AT OLYMPIC TRIALS, SAYS SHE WAS ‘SET-UP’

Sydney McLaughlin reacts after setting a new world record in the finals of the women’s 400-meter hurdles at the U.S. Olympic Track and Field Trials Sunday, June 27, 2021, in Eugene, Ore. (AP Photo/Ashley Landis)

After her record-breaking run, McLaughlin crouched on the track, her hand over her open mouth in disbelief.

Muhammad won the gold in Brazil in 2016. Muhammad bested runner-up McLaughlin in the 2019 world championships in Doha.