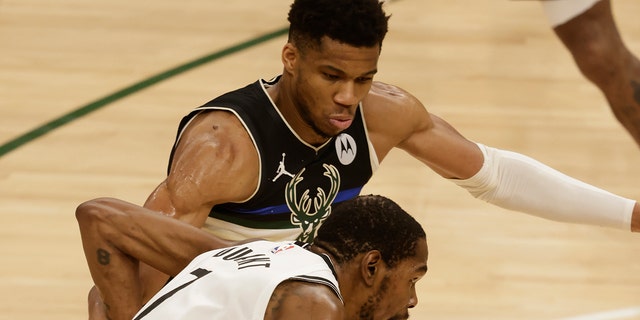 Giannis Antetokounmpo and Khris Middleton led the Milwaukee Bucks to a big blowout win over the Brooklyn Nets on Thursday night and forced a series-deciding Game 7, 104-89.

Antetokounmpo stepped up big for the Bucks. He scored 30 points and grabbed 17 rebounds in the win. His performance was buoyed by Middleton who led Milwaukee with 38 points and 10 rebounds. Jrue Holiday added 21 points of his own on 8-for-21 shooting from the field.

They were the only Bucks players in double figures.

Kevin Durant attempted to squeeze out another dominant performance for the Nets. He helped Brooklyn cut the deficit to five points twice during the game, but subsequent Bucks’ runs would kill any type of momentum the Nets had.

Durant led Brooklyn with 32 points and 11 rebounds in 40 minutes of play.

Brooklyn’s Jeff Green failed to replicate his Game 5 performance. He scored five points in 36 minutes. He was 2-for-9 from the field. Joe Harris’ struggles continued as well. One of the NBA’s top three-point shooters, Harris was 1-for-4 from deep.

Milwaukee was able to make Brooklyn pay off of their turnovers.

The Nets had 16 turnovers in the game. The Bucks scored 20 points off of them. It was the opposite for the Nets as they only scored eight points off of Milwaukee’s 15 turnovers. Milwaukee also outrebounded Brooklyn 36-30 and 15-9 on the offensive glass. Those little things are what helped the Bucks in the most pivotal moments.

Game 7 will be back in Brooklyn on Saturday.