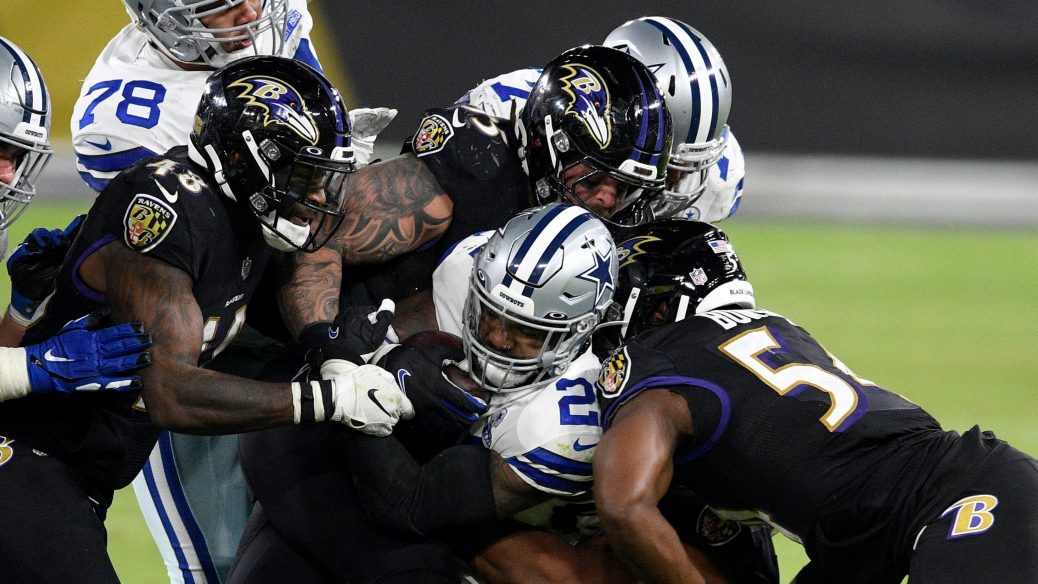 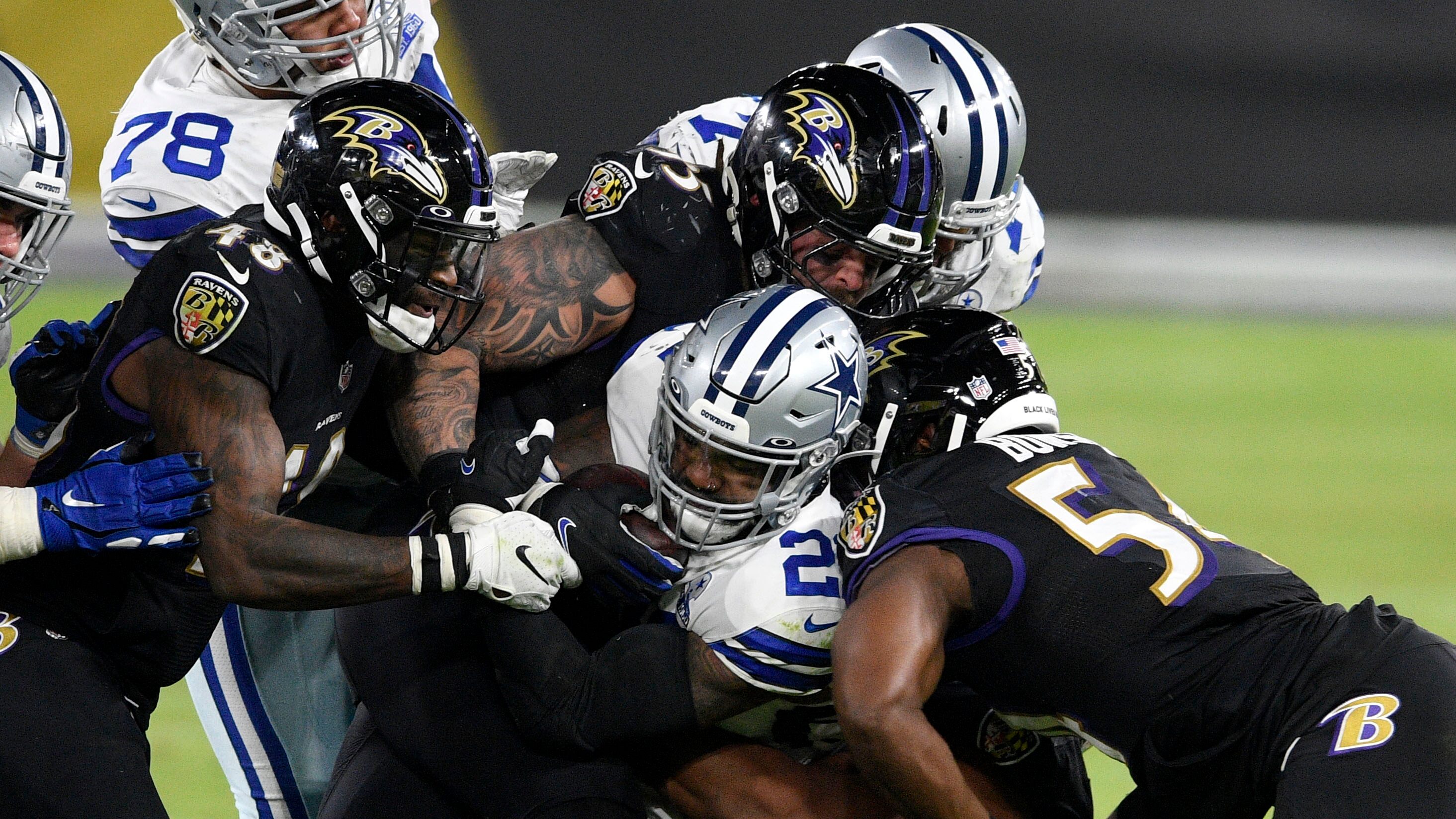 The Dallas Cowboys have the worst record in the NFC going into the final quarter of the season, and they aren’t eliminated from the playoffs only because they play in the NFL’s worst division.

Even the NFC East is getting better as the Cowboys (3-9) continue to flounder, with one victory in the past seven games of coach Mike McCarthy’s Dallas debut, and the excuses of the pandemic are wearing thin as the blowouts mount.

JAGUARS’ GARDNER MINSHEW ‘BEGGED’ FOR STARTING JOB AFTER COMING BACK FROM INJURY: ‘I WANT TO BE OUT THERE’

Victories on the road by the Giants and Washington over strong contenders (New York beat Seattle, and Washington topped previously unbeaten Pittsburgh) leave little doubt the Cowboys can quit pretending there’s hope of returning to the playoffs a year after missing the postseason cost coach Jason Garrett his job.

After COVID-19 issues caused a five-day delay before the 34-17 loss to Baltimore on Tuesday night, the Cowboys face their second short week of the season going into a visit to Cincinnati (2-9-1) on Sunday.

“I don’t talk about it,” McCarthy said of the division race. “I think it’s known. Frankly, we need to play better. The fourth quarter of the season is upon us and our goal is to finish strong. That definitely starts with a win in Cincinnati.”

Since a surprising win at Minnesota that had a chance to save the season, the Cowboys have been run over — literally — in the fourth quarter of losses to Washington and the Ravens, who almost hung the second 300-yard rushing game of the season on the Dallas defense.

Yes, the pandemic hurt implementation of a new defensive scheme with McCarthy bringing in defensive coordinator Mike Nolan. Sure, injuries have played a big role, most notably quarterback Dak Prescott’s season-ending ankle injury and a dizzying amount of changes in the offensive line.

Even with all of that, the last thing owner Jerry Jones expected was a top-five draft pick five years after a similarly lost season led to the No. 4 choice and two-time rushing champion Ezekiel Elliott, who is having his worst year as a pro.

Dallas is guaranteed to have a losing record in McCarthy’s first season after finishing below .500 just once in Garrett’s nine full seasons.

“It’s frustrating to be in the position that we’re in,” quarterback Andy Dalton said. “To have opportunities in some of these games and just not be able to get it done. All we can do is put our head down and work and try to make the most of these last four games on the schedule.”

The offense is getting better with Dalton settling in after starting twice coming off Prescott’s broken ankle, missing two games, and now making three straight starts. The Cowboys had 388 yards, their most since the injury, but had trouble getting inside the 20. Three of those drives ended in missed field goals.

The run defense had regressed to the embarrassing form of early in the season after showing progress. Even the loss to Washington on Thanksgiving looked better before an ill-advised fake punt led to a rough fourth quarter punctuated by two long TD runs.

The loss to the Ravens looked more like a defense that allowed at least 200 yards rushing in three out of four games the first half of the season. Dallas is giving up 168 yards rushing per game, second in franchise history to the inaugural — and winless — 1960 team.

The Baltimore game was perhaps the best overall for the much-hyped receiving trio of Amari Cooper, Michael Gallup and rookie CeeDee Lamb. Each had at least five catches and played a role in keeping the offense moving. Cooper and Gallup had the two Dallas touchdowns.

There were more questionable moments for the coaching staff, highlighted by McCarthy failing to call a timeout with the play clock approaching zero before a 35-yard field goal attempt. Greg Zuerlein missed from 40, then was wide twice from 50-plus yards when the Cowboys might have been better off going for it on fourth down both times.

“Frankly, I thought we were going to snap the ball and kick the field goal,” McCarthy said when asked why he didn’t call a timeout. “There was obviously a breakdown in our operation.”

Rookie cornerback Trevon Diggs (broken foot) is eligible to come off injured reserve, but the short week might mean otherwise. There could be a better chance of cornerback Anthony Brown (ribs) and safety Donovan Wilson (groin) returning after both were ruled out a day before the Baltimore game.

300.5 — The average number of yards rushing the Cowboys have allowed in demoralizing losses to Cleveland and Baltimore. Dallas gave up a franchise-record 307 yards in the 49-38 loss to the Browns and is on track for the worst run defense in the NFL since 2010, when Buffalo allowed 170 yards per game.

Dalton returns to Cincinnati, where he was the starter for nine seasons before the Bengals used the No. 1 overall pick this year on Joe Burrow. Dalton signed a one-year contract with Dallas to be Prescott’s backup.