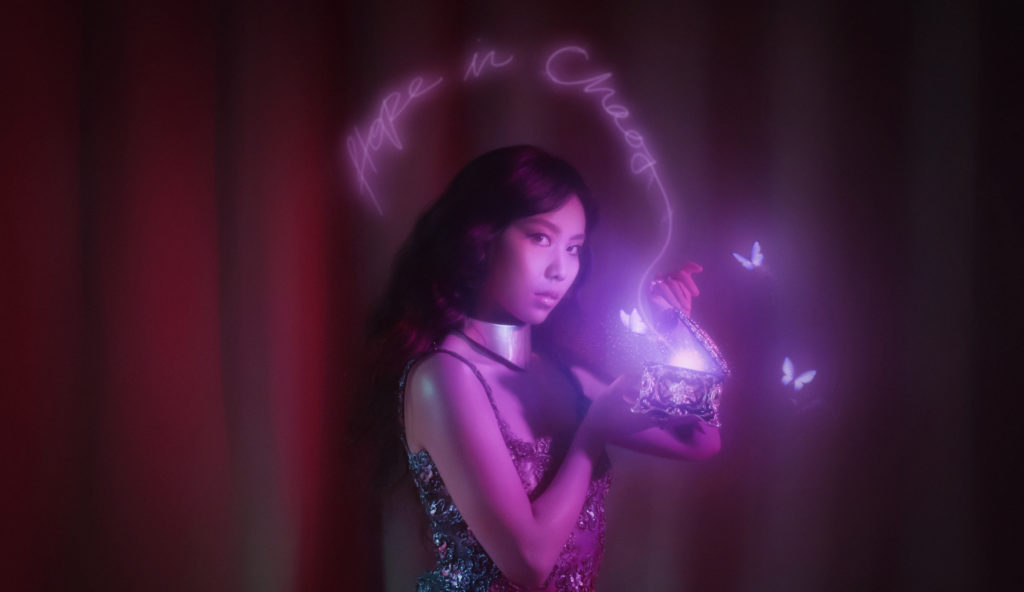 Rising artist JVNA has finally unleashed her anticipated debut album, Hope In Chaos. As you’ll hear below, the 12-track project is a deeply moving listening experience as the classically trained musician takes us on a beautiful personal journey through grief, love, determination, and other resonant emotions she’s faced over recent years. Employing a melting pot of sonic influences ranging from electronic, pop, and rock, this eclectic LP is captivating from start to finish; not to mention jam-packed with meaning and passion that will leave you feeling inspired and genuinely touched. On the heels of Hope In Chaos, JVNA will be hitting the road for an album-themed tour starting on February 19th. We had the pleasure of sitting down with the artist herself to talk about the inspiration behind this impressive project; check it out below and be sure to blast the album as well.

RTT: Taking on writing, singing, and production duties for an entire album is impressive. What was that creative process like for you and how did it influence the final product?

JVNA: Thank you! I truly enjoy being able to express creativity in all aspects of my music – production, melodies, lyrics, and music videos. I think because I’m doing all of this, I’m telling a genuine story from my heart that translates to the listener as authentic as it can be. The creative process can be very frustrating as I can be very perfectionist about really minuscule details that most people wouldn’t even notice if I didn’t point out. However it’s all worth it at the end when I’m able to listen back to a song and feel a sense of ease because everything is in the right place I envisioned it to be.

How has being a classically trained musician informed your approach to producing electronic music in 2021?

Composition in classical music is very different from Electronic music and especially pop. A full orchestra can be composed of 100 players and each of them are playing a very specific detailed composition that all together creates one sonic texture. With electronic music, you have to worry about things not sounding too “muddy” whereas it is a completely different approach in classical music. I struggled with that a bit when I first started producing electronic music because I would have 20 melodic ideas that I wanted to fit into 2 bars of music. I also studied film scoring in
college, so I think that has translated some cinematic elements into my own electronic music. I like to have lots of slow sweeping evolving builds and tell stories with them sonically.

You’re channeling a lot of powerful emotions on Hope In Chaos, in particular grief. Talk a bit about how your life experiences have influenced the making of this project.

This album is written about a time of instability where I was going through so many rapid changes at once – breakups, death of father, graduating from college, entering the entertainment industry. I’m now at a pretty mentally stable part of my life and in a way, writing this album is my way of processing my journey to adulthood.The overall theme of this album is about the story of Pandora’s Box. The Greek tale follows the goddess Pandora who opens a forbidden box out of her own curiosity, thus unleashing chaos, diseases, and sins into the universe. The one thing that was left behind was hope. This album is about reaching into the unknown, fighting chaos against all odds, and seeing the light at the end of the tunnel.

I staged my tracklist in a similar fashion to the stages of Grief. In the first song “Chaos (Prelude)” my last spoken lyric says “I’ll soar among the chaos”. That is why the last song of the album is called “Fly”. The songs “Where You Are”, and “Ghost” are songs about breakups and wanting them back in your life. “Breakdown” and “Sins” are angry songs dwelling on the situations that have happened. “Sins” hold very dear to my heart because I wrote it about the regret I have for having my last conversation with my father be a fight. The drop of “Sins” sounds like pans and dishes clashing – a memory of my divorced parents fighting. “18” is about my female story. The song that has the most emotion behind it is probably my song “18”. This song is about the dangerous box of impurities that come with turning 18.

You are immediately legally able to be sexualized by others. My lyrics ‘ Will you cut your face just to be pretty?’ is about the plastic surgery industry and the unrealistic beauty standards that many young women like myself have wanted to attain. ‘You say I want to be naughty’ is a really direct line about the cringe messages I’ve gotten in my DMs as a high schooler from older men. It is an overall song about how I felt transitioning into adulthood as a woman and also a turning point in the album. “Bullseye” is taking action and reaching for ambition to turn your life around. “Hope” is the interlude from the emotions of Chaos to Hope. From here on, the album becomes more hopeful and bright. “At least It was Fun” and “Dystopia” are songs about accepting your past, and current conditions. “True Colors” and “Fly” are about my experiences of happiness and resolve coming out of this journey.

Has opening up and being vulnerable on this album been therapeutic for you? What advice would you give other artists who are trying to express themselves authentically in this way?

When I wrote this album, I was in a very emotionally unstable part of my life. My early 20’s were full of changes and my journey into adulthood was very impacted by the death of my father. I wanted to tell a healing story to my audience that there is always a light at the end of the tunnel. Writing this album in a sense was also a healing process for me to cope with my understanding of all the changes I was going through. My advice to other artists who want to express themselves in an authentic way would be to write about specific personal stories. I think a lot of people dismiss their stories as not being ‘deep’ or ‘interesting’ enough but that is just their own personal impostor syndrome speaking. Every emotion each human being goes through is a story worth telling and if it’s able to be translated into art, that will be one of the purest and most beautiful things that can exist from the artist.

You’ve reached a huge career milestone in releasing your debut album. What’s the next goal for JVNA, what would you like to accomplish next?

My goal is to play Coachella mainstage!