Unvaccinated adults are bringing Covid home to their kids. Pediatricians are overwhelmed. 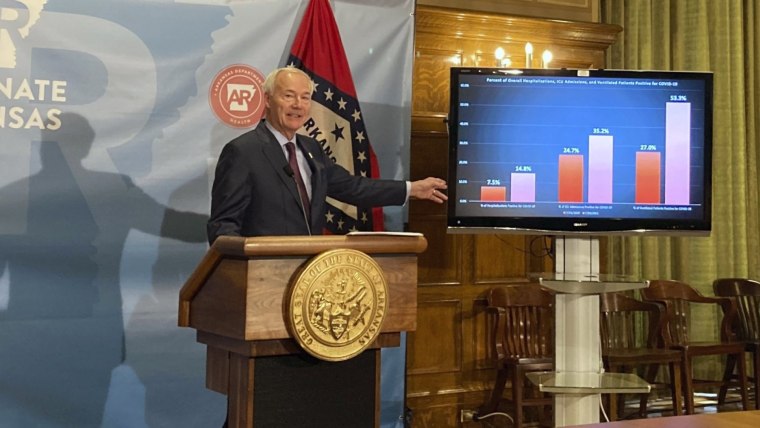 As vaccination rates lag and the new delta variant surges, Covid infection rates among kids have risen and children’s hospitals are seeing a spike in medical care needs among the young patients.

The Covid surge is also stacking upon an unseasonable spike in respiratory illnesses among children typically seen only in winter. That has shrunk the bed space further in children’s hospitals and expanded on the unrelenting demand on doctors and nurses.

“It is scary, especially for kids who don’t fully understand what’s going on. They’re air hungry, struggling for breath, and it’s just scary,” said Dr. Kelechi Iheagwara, medical director of the pediatric intensive care unit at the Our Lady of the Lake Children’s Hospital in Baton Rouge, Louisiana. “You have the illness, the fear, they can’t breathe, they’re isolated — that’s hard for anyone to understand, but can you imagine what it’s like for a kid?”

Her hospital has treated Covid in children ages from 3-week-olds to 17-year-olds in recent weeks. Iheagawara said that for the past month, her unit has had to treat 25 or 26 patients in a space designed for 20. And things are getting worse.

Multiple doctors in the half-dozen children’s hospitals NBC News reached out to said they have seen children infected because a member of their household, often a parent, brings the coronavirus home. Oftentimes, it is because an adult in the home is unvaccinated.

“Absolutely, household infections are the beginning of this pandemic, that is a major driving force in the spread of infections. We see it often within households, parents to children,” said Dr. Jim Versalovic, the chief pathologist and interim chief pediatrician at Texas Children’s Hospital in Houston. “We have certainly seen siblings — more than two at times — with an infection at the same time, so spread within households is certainly a very real phenomenon.”

The Covid-19 spike hit the Baton Rouge children’s hospital in mid-July and brought its monthly total to 75 cases — the highest number of coronavirus hospitalizations during the entire pandemic. With 27 children admitted to the emergency room over the first four days of August, the hospital has already seen more child hospitalizations than it saw in the entire month of June.

Combined with the rise in out-of-season virus infections this summer, the hospital has been at bed capacity for weeks and the number of Covid cases among kids is projected to grow for the next two to three months. It remains particularly concerning as children under 12 remain the most vulnerable to Covid since they are not yet able to receive the vaccinations.

“We’re also a trauma center, so we have to be available for kids that get in car accidents and things like that,” said Dr. Trey Dunbar, the president of Our Lady of the Lake Hospital. “My fear is that with our staffing crunch, if this surge continues, how do we keep caring for the kids that we need to have beds for?”

Children’s hospitals in areas seeing a surge in Covid cases are experiencing the same pattern: More children are coming in with Covid symptoms just ahead of the start of the school year. Bed shortages and overworked doctors and nurses in children’s hospitals are becoming commonplace.

“Children in Louisiana have died of Covid and more unfortunately will die,” said Dr. John Vanchiere, a pediatric infectious disease specialist, as he stood next to Bel Edwards at a news conference last week. “This is not a time for politics, for fighting or threatening lawsuits about masks. Masks save lives. And if you’re a pro-life Louisiana resident like I am, wear your mask.”

At least 81 children in the U.S. died of Covid between March and July, according to the Centers for Disease Control and Prevention, and many doctors warn that the situation is likely to get worse.

Local reactions to these growing numbers are mixed, however. The governors of Texas and Florida, both Republicans, have refused to change course on their opposition to mask use and any other precautions, even after President Joe Biden implored them to “please help” or “get out of the way.”

Meanwhile, the Covid surge and resulting hospitalization rate have grown so bad in Arkansas that Gov. Asa Hutchinson, a Republican, recently advocated for a mask mandate in schools there. This comes months after he signed a bill banning state and local mask mandates.

Doctors and experts said that kids who returned to school last school year did so successfully because Covid precautions were in place. But as the CDC and state and local governments relaxed their guidelines this year, many of those safeguards evaporated.

“This new variant is a major contributor, but a major issue is that people’s behavior has changed,” said Gigi Gronvall, a senior scholar at the Johns Hopkins Center for Health Security. “I don’t think we can absolve people and leaders of responsibility for this because it gives them a pass. The reason kids are getting infected is because we don’t have those precautions and parents and households are getting infected.”

Many of the doctors interviewed expressed frustration that a large number of people within their community remained unvaccinated and are even openly hostile to the measure. It is having a negative effect on morale, many said, especially as the work once again increases.

“When I say they’re tired, they’re beyond that. They’re like, ‘I’m done,’” said Dr. Jason Newland, a Washington University infectious disease physician at St. Louis Children’s Hospital. “People are saying they just don’t want to do it anymore, and so we’re growing more and more limited in bed capacity. Hospital administrators are trying to figure these staffing shortages out — hats off to them — but these conversations are difficult because it comes down to the children and these families that need to be cared for.”

Children under 12 are especially in need of that care as they are the one group that remains completely unvaccinated. The Food and Drug Administration has not released emergency authorization for them to get the shot, fueling worries as many kids are scheduled to begin school in the coming weeks.

Versalovic, whose hospital in Texas is involved in the Pfizer and the Moderna vaccine trials for kids under 12, said that they don’t anticipate sending the FDA their data until well after the start of the school year.

“Hopefully, there will be emergency authorization soon after we release the data, but we have to face the reality of beginning the school year without it,” he said. “We do anticipate having vaccines available for kids during the first half of the school year, but for children under 5 that’s likely to occur later in the year, possibly early 2022. It’s going to be an ongoing effort.”

That’s tough for many to hear, even in places where Covid outbreaks have not recently spiked. In areas that are only seeing a moderate increase in cases, children’s hospitals are still worried as they combat a surge in respiratory viruses while facing the looming school year and a large population that remains unvaccinated.

Dr. Cameron Mantor, the chief medical officer at the Oklahoma Children’s Hospital in Oklahoma City, said they are contending with a number of children in hospital beds stricken with respiratory diseases normally seen in winter, as well as a depleted workforce. A surge in Covid cases, like what they saw this year or what the northeast part of the state is combating now, could overwhelm them.

“Our challenge is to figure out how we don’t get ourselves back into the situation that we had months ago,” he said. “The big question is, how do we get all these people vaccinated? How do we let them know it’s safe and very effective? How do we dispel all the myths?”