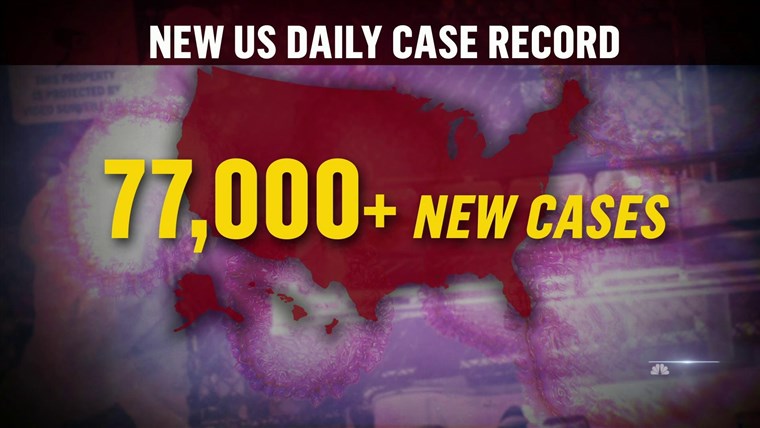 For the second day in a row, the United States set a daily record for coronavirus cases when more than 79,000 infections were reported.

The new benchmarks were hit as the pandemic has accelerated at a pace not seen since the summer and as many local governments have reimposed restrictions to stop the spread of a virus that has killed 225,108 people in the U.S., according to the latest tally.

President Donald Trump, during his final debate with Joe Biden on Thursday, declared yet again that the pandemic “will soon be gone.”

“We’ve been hearing essentially the same words from the president since February, that it was going to go away, that it’s going to disappear, whether that’s in February, March, April, May, and that’s what he’s saying now,” Dr. Ashish Jha, dean of the Brown University School of Public Health, told MSNBC’s Stephanie Ruhle on Friday. “That’s not what the data says, unfortunately. I wish he was right.”

In other coronavirus news:

Dr. Anthony Fauci, the nation’s top infectious disease expert and a frequent Trump target, warned that with the weather turning colder and more people congregating inside the U.S. is in a “precarious” place. He said there’s no chance a Covid-19 vaccine will be ready before Election Day as Trump has predicted.

“Most likely the end of November, the beginning of December, we will know that a vaccine is safe and effective,” Fauci told MSBNC’s Chuck Todd. “And I’m cautiously optimistic that it will be. There will be doses that are already made and ready to go at the end of the year. But, if you talk logistically about getting it to the major proportion of the population, that will be, obviously, several months into 2021.”

Earlier, Atlanta Mayor Keisha Lance Bottoms said on NBC’s “Morning Joe” that she was incensed by Trump’s claim that he’s done more for African-Americans than any president since Abraham Lincoln, and noted that the Black community has been hit especially hard by the coronavirus.

“Well, he’s put us on the receiving end of Covid-19 and he’s given us the highest death rates in the nation,” Bottoms said. “That’s what he’s doing for the Black community right now and I can tell you as an African American sitting in that audience, I was incensed that he would have the gall to even compare himself to Abraham Lincoln.”

The U.S. leads the world with 8.5 million confirmed cases of Covid-19, and this week Dr. Jay Butler, deputy director for infectious diseases at the Centers for Disease Control and Prevention, reported what he called a “distressing trend” in which coronavirus case numbers are “increasing in nearly 75 percent of the country.”

“The American public is understandably frustrated, and asking how long this pandemic will continue, how many more will become infected, and how many more will die,” Dr. Thomas Kenyon, chief medical officer at the international health care organization Project HOPE, said in an email to NBC News.

“It is not too late for us to change the course of the pandemic,” Kenyon added. “Simple things will make a huge difference — wear a mask, keep your distance from others, avoid crowded situations, wash your hands, seek testing if you are sick or think you have been exposed to someone with Covid-19.”

In the U.S., much of the increase in new cases have been driven by surges in Midwestern states like Illinois, Indiana, Michigan, Minnesota, Nebraska, Ohio, Wisconsin, North and South Dakota that have recorded rises in case numbers in the last two weeks.

The situation in Idaho is so dire that local health officials are considering sending new coronavirus patients to neighboring Washington state and Oregon because they are running out of hospital beds.

But states in the Northeast, which were hot spots in the early days of the pandemic, were also reporting clusters of new infections in some areas.

Public health officials attribute the spikes, in part, to cooler weather that is forcing people indoors and a public that’s become increasingly weary of wearing masks and social distancing.

“Smaller, more intimate gatherings with family, friends and neighbors may be driving infections,” Butler said. “We get tired of wearing masks, but it continues to be as important as it’s ever been.”

In some New York City neighborhoods that have reported surges in new Covid-19 cases, there have been angry demonstrations against mask wearing and social distancing mandates.

In Chicago, the ban on indoor service at bars that don’t have food licenses went into effect again Friday after the city”s average daily case rate increased by more than 50 percent in the last week, NBC Chicago reported.

“We are, no doubt whatsoever, in the second surge,” Lightfoot said. “This is what it looks like.”