The U.S. hasn’t OK’d boosters for those who got the J&J vaccine. But some are getting one anyway.

Home LIFESTYLE HEALTH & FITNESS The U.S. hasn’t OK’d boosters for those who got the J&J vaccine. But some are getting one anyway. 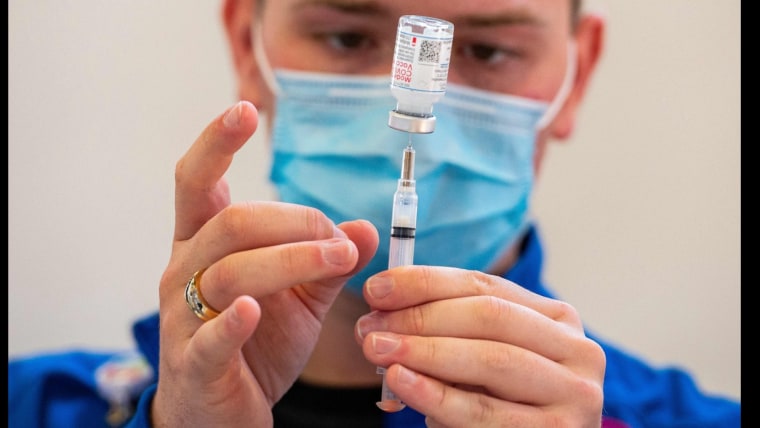 In early April, Mark Dinan got the single-dose Johnson & Johnson vaccine at a middle school campus near his home in East Palo Alto, California. He felt fortunate to get a “one-and-done” shot, and the side effects were mild.

But this summer, as the delta variant of the coronavirus started to spread across the United States, he grew increasingly concerned.

He read about a study that suggested the one-dose J&J vaccine might be less effective in fending off coronavirus variants than two-dose mRNA shots. He was especially troubled by one of the findings: the one-dose AstraZeneca vaccine, which is similar to the J&J shot, showed only about 33 percent efficacy against symptomatic disease caused by delta. What if he was vulnerable?

“It’s like you’re in a hurricane and somebody’s giving you a garbage bag to put over your head to keep you dry. It’s not the same as the Gore-Tex bodysuit that Pfizer and Moderna people are wearing in the same storm,” said Dinan, who owns a Bay Area-based recruiting firm.

So, on the morning of July 22, he walked into a local CVS pharmacy and got another injection. No big deal, he recalled.

The study that Dinan read about has not been peer-reviewed or published in a medical journal. It looked at the antibody response in blood samples, according to the researchers; other important components of the immune system response were not examined.

Johnson & Johnson has said the research does not show “the full nature of immune protection.”

Dinan is part of a group of people in the U.S. who have sought out additional doses of Covid vaccines after getting the J&J shot, essentially mixing and matching shots from different companies. In recent weeks, people have said on social media that they even misled vaccine providers, claiming they were not inoculated so they would be eligible for another injection.

Yet these “booster” shots have not been authorized by the federal government, and it is not clear if combining two different vaccines is safe or effective. The leading public health authorities in the U.S. insist vaccines still provide robust protection against delta and other known variants, and nearly all recent hospitalizations and deaths are among unvaccinated people.

The Food and Drug Administration and the Centers for Disease Control and Prevention said in a joint statement last month that “Americans who have been fully vaccinated do not need a booster shot at this time.” Dr. Peter Marks, a senior official at the FDA, said the agency does not recommend “taking things into your own hands” when it comes to booster shots.

“It’s actually not something you’re supposed to do under emergency use authorization,” Marks said Tuesday at an event hosted by the Covid-19 Vaccine Education and Equity Project, referring to the federal approval given to Pfizer-BioNTech, Moderna and Johnson & Johnson.

The apparent wave of interest in additional shots nonetheless underscores the heightened anxiety over the delta variant, which is the most contagious coronavirus mutation to emerge so far in the pandemic.

Dr. Kavita Patel, a primary care physician in Washington, D.C., said she believes the people who got the J&J vaccine have been left “high and dry,” injected with a vaccine that may not be sufficiently efficacious against delta but lacking a government-sanctioned way to get an extra shot.

“We’ve been talking a lot about third doses, but we’ve forgotten there are 13 million people who don’t have a third-dose option because they got J&J,” she said, adding she has not formally advised her own patients to get boosters.

What’s more, a real world study of health care workers in South Africa previewed Friday suggests that the Johnson & Johnson vaccine is 71 percent effective against the delta variant at preventing hospitalization and over 90 effective at preventing death.

Dinan, for his part, said he has no regrets about his decision.

“I would feel bad about this if I thought I was doing something illicit, immoral, unethical or wrong,” he said, adding: “I think it’s actually probably slightly ahead of the curve. I bet you a dollar that by Oct. 1, this is the standard procedure.”

But some J&J recipients have more qualms about stepping into a potential ethical gray area and seeking out a technically unauthorized extra dose.

Tim, of Illinois, who asked that his last name and other identifying details be withheld because he was concerned how his decision would be perceived by his employers and colleagues, said he jumped at the earliest opportunity to get vaccinated, driving four hours to a location downstate March 12 to receive the one-dose J&J.

He did not second-guess his decision for several months. But when he learned that the J&J vaccine might be less effective against delta, he grew alarmed. He takes medication for an underlying condition that suppresses his immune system, and he feared he was at risk.

He said his doctor recommended he seek out a Pfizer “booster.” On Tuesday, he went to a local pharmacy where he assumed his insurance information was not on file and claimed he was not already vaccinated against Covid.

“I’m somebody who’s generally a rule follower,” Tim said. “It didn’t feel good circumventing the system, so to speak, in order to do what I had to do and what my doctor recommended I do.”

“It does make you feel kind of like a criminal, that you have to go about doing it this way,” he added. “It’s unfortunate.”

Nevertheless, Tim said he now feels a “sense of relief” — and that he is better protected against delta.

Even some medical experts have evidently decided to seek out what some see as a thicker suit of armor against the evolving threat.

Jason Gallagher, an infectious diseases expert at Temple University’s School of Pharmacy, got the J&J vaccine in November during a clinical trial. He told Reuters in June that he then received a Pfizer dose at a Philadelphia vaccine clinic where he has been administering shots.

He said at the time that he was concerned about data from the United Kingdom showing lower efficacy against the delta variant for people who received one vaccine dose.

“The Delta variant that’s spreading … and really quickly taking over in the U.S. looks a little more concerning in terms of the breakthrough infections with the single-dose vaccines,” Gallagher said in that interview. “So I took the plunge.”

The use of boosters is more common in Canada and some European countries. Germany’s government has said Chancellor Angela Merkel got a Moderna shot in June after getting one from AstraZeneca in April. Israel has started giving a third shot to certain vulnerable people.

At least one U.S. city is offering more flexibility. The San Francisco Department of Public Health announced last week it will offer what it called a “supplemental” dose of the Pfizer or the Moderna vaccines to anyone who got the single-dose J&J.

However, San Francisco officials made clear that the decision does not reflect a policy change. They still do not recommend a booster shot, saying in a statement that they are simply allowing “accommodations” for people who have consulted with their doctor.

Guanyao Cheng, 41, a lawyer in San Francisco who got the J&J shot in early April, said he received a dose of Moderna on Thursday afternoon on the advice of his sister, an emergency room physician.

“She strongly recommended I get an mRNA booster shot, and she kept nagging me about it,” he said, adding that he finally made an appointment after he learned that San Francisco was offering additional doses.

Cheng said he was aware that the extra shot was not officially sanctioned by the CDC, but he thought the risk was worth it as delta looms over much of the country.

“I also really trust my sister,” he said.

The use of boosters in the U.S. comes as poorer nations grapple with shortfalls in vaccine supplies. The head of the World Health Organization called for a moratorium on boosters Wednesday, citing the gap between wealthy and poor countries in total vaccinations.

“I understand the concern of all governments to protect their people from the delta variant. But we cannot accept countries that have already used most of the global supply of vaccines using even more of it,” Tedros Adhanom Ghebreyesus said Wednesday.

Dinan, the recruiter in East Palo Alto, said he recognized that he was extraordinarily “privileged” to have got a booster shot with relative ease and convenience — let alone a Covid-19 vaccine in the first place.

“I’ve lived in England, Brazil and Mexico, and I know it’s an incredible privilege as an American to have access to these vaccines. I don’t think people in the United States realize just how amazing it is to decide at 10 a.m., ‘Oh, I’d like to get vaccinated,’ and be done by noon,” he said.

“I know friends in Brazil and Mexico who would crawl over broken glass at 3 a.m. on a Sunday to get vaccinated,” Dinan added.