‘I told you I was old’: Funeral held for ‘Captain Tom’ who raised millions for U.K. health service

Home LIFESTYLE HEALTH & FITNESS ‘I told you I was old’: Funeral held for ‘Captain Tom’ who raised millions for U.K. health service 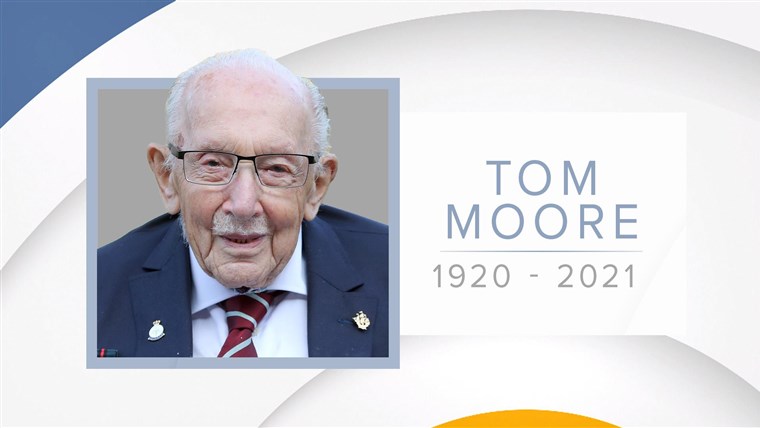 LONDON — “I told you I was old,” will be the epitaph on the headstone of Captain Sir Tom Moore, the British veteran who made headlines around the world after he raised millions for the U.K.’s health service, during the coronavirus pandemic.

Moore, whose funeral took place Saturday, chose the words before he died aged 100 on Feb. 2, in a hospital in England after testing positive for Covid-19.

Queen Elizabeth II, Britain’s parliament and the White House, which said he had “inspired millions through his life and his actions,” all paid tribute to the World War Two veteran on news of his death earlier this month.

Dressed in a dapper blazer and tie and displaying his World War II medals, Moore struck a chord with locked-down Britons last year, as he walked up and down the garden of his home in Marston Moretaine, a small village around 50 miles north of London, to raise money for the National Health Service.

With a mischievous wit and steely determination, he lifted public spirits and was hailed a national hero. He was knighted by Queen Elizabeth II in July.

Moore’s funeral, which he played a significant role in planning, was held at the Bedford Crematorium near his home.

In keeping with Britain’s Covid-19 restrictions, just eight members of his immediate family attended the funeral, his two daughters Hannah Ingram-Moore and Lucy Teixeira, four grandchildren and his sons-in-law — all wearing face masks.

Draped in a union flag, his coffin was carried by soldiers while a World War II-era C-47 Dakota plane performed an honorary fly-past.

They have also supported a global initiative to plant millions of trees, so that his legacy can live on.

Raised in the U.K.’s northern county of Yorkshire, Moore served in India, Burma and Sumatra during the war.

After his garden walking exploits drew praise, he went on to record a number one pop song and author a book.

“The last year of our father’s life was nothing short of remarkable. He was rejuvenated and experienced things he’d only ever dreamed of,” his daughters said following his death.