The U.S. could see a second wave soon. Hospitals already on the brink fear ‘disaster.’ 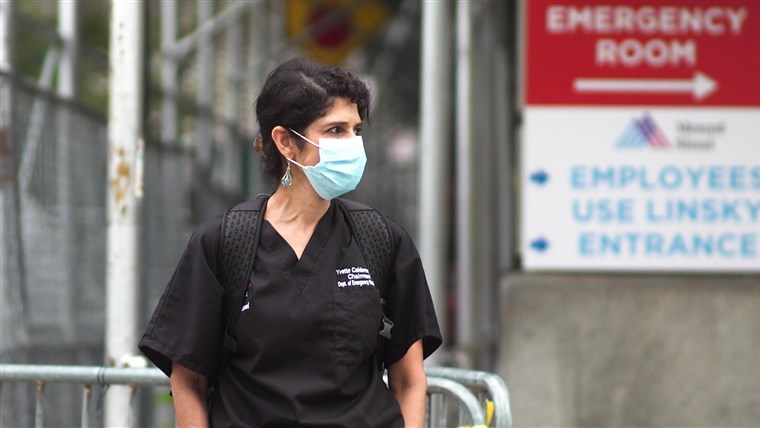 When Dr. Shereef Elnahal walked through his New Jersey hospital in April, he couldn’t believe what he was seeing.

There were 300 patients being treated for Covid-19, filling hospital rooms and spilling out into the halls of the ER. The trauma center, once used for gunshot wounds and car crash victims, was now filled with people on ventilators.

“It was really like nothing we’ve ever seen before,” said Elnahal, president and CEO of University Hospital in Newark.

“I have memories of walking around and I would look inside the rooms where that was possible. Almost every person was a person of color,” he told NBC News.

Elnahal’s hospital is one of the more than 100 major medical centers that treat America’s most vulnerable patients — communities of color who have been disproportionately harmed by Covid-19. Data has increasingly shown that Black and Hispanic patients are more likely to be hospitalized with the virus and, in many cases, more likely to die from it.

“We’re learning more and more that it’s these vulnerable communities being hit harder by the pandemic,” said Beth Feldpush, senior vice president of policy and advocacy for America’s Essential Hospitals, a group representing the more than 300 hospitals that treat uninsured patients. “Our hospitals are absolutely serving those hardest-hit communities.”

A second surge of Covid this fall and winter could be catastrophic for the U.S. and it’s not just more sick people that doctors worry about. The very hospitals that treat lower-income patients could be forced to shut down or cut crucial services.

“We would absolutely be at risk of closing,” Elnahal said. “It would be a public health disaster for this community.”

The hospitals were forced to cover the exorbitant costs of buying extra personal protective equipment like N95 masks, as well as convert wards to treat Covid patients and treat more uninsured patients. At the same time, they had to stop performing revenue-generating procedures like elective surgeries.

By the end of 2020, hospitals across the U.S. will lose about $300 billion, according to the American Hospital Association. But for major medical centers like University Hospital in Newark, the financial hit of a second wave of Covid would be especially devastating.

“Where there are already cracks in the system, those cracks become earthquakes,” said Dr. Chris Pernell, University Hospital’s chief of strategic integration and health equity officer.

That’s because these safety nets hospitals are non-profit and promise care for all patients, regardless of insurance coverage. Even before the pandemic, they operated on shaky budgets. Jackson Health System in Miami, for example, only has enough cash on hand to operate for 50 days. Private hospitals typically have more than triple that amount of cash in reserve.

‘Where else would they go?’

Mark Knight, chief financial officer for Jackson Health System, said if it wasn’t for an injection of federal funds, the hospital system, which serves between 1,200 and 1,300 patients a day, could have been in a dire situation.

“This year would have been a fiscal disaster,” he said, adding that the local government serves as a backstop in case they reach a crisis point.

While most safety net hospitals, including Jackson Health and University Hospital, received federal funds this year to bail them out, others like Valleywise Health in Phoenix got nothing. Chief medical officer Dr. Michael White, blamed a glitch in the formula used to calculate which safety net hospitals would receive money through the CARES Act Provider Relief Fund.

The health system, which serves more than 400,000 mostly Hispanic patients annually, is still trying to figure out the extent of the loss from the first Covid wave. If a second one hits, White said, they may be forced to cut services.

“Any time you see health care services decrease, there’s diminished access to care for those that are the most vulnerable and who need it most,” White said.

A recent study from the University of California, Berkeley revealed that there may be racial bias in the formula the government used to distributeCARES funds to hospitals, leaving some predominantly Black and Hispanic communities shortchanged, even though they were hit harder by the pandemic.

“Looking at how the funding went out the door, providers serving those vulnerable communities did not get as much of the funding,” Feldpush said, adding that later distributions did target certain Covid hotspot hospitals.

The hope is that if there is a resurgence, the federal government will step in again, but there is no guarantee. In fact, Feldpush says HHS still has another $50 billion allocated for providers that should have already been distributed. Even that won’t be enough to cover the costs of a resurgence of Covid.

In the meantime, hospitals are preparing for the second wave, stocking up on PPE despite lingering shortages, and implementing lessons learned from the first surges, especially when it comes to treatment.

However, for the patients who rely on these hospitals, their concerns aren’t about budgets and bottom lines.

“The hospital means everything to the community,” said 49-year-old Tawanda Sheard, a University Hospital employee who has lived in the neighborhood for 25 years and was hospitalized there with Covid last spring. “They might not have the best insurance, but they know they can come there. Where else would they go to get treated?”