The Trump admin awarded a firm $1.3 billion to make Covid vaccine syringes. Where are the syringes?

Home LIFESTYLE HEALTH & FITNESS The Trump admin awarded a firm $1.3 billion to make Covid vaccine syringes. Where are the syringes? 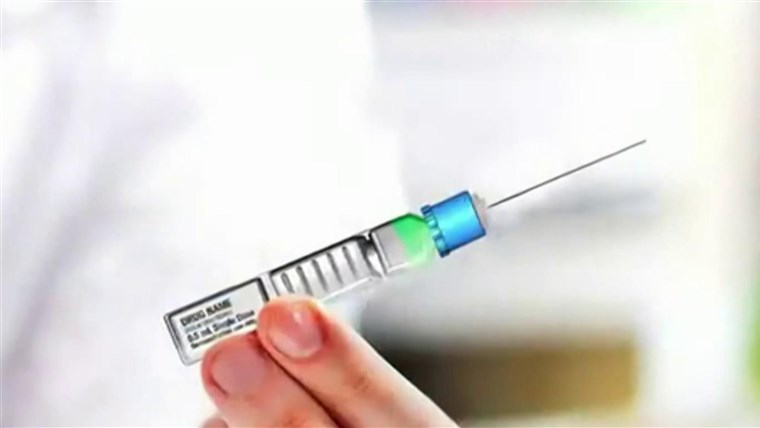 WASHINGTON — A year after a Connecticut company was awarded almost $1.3 billion in federal loans and contracts to supply an essential syringe for the Covid-19 vaccine rollout, no syringes have been made. The syringe hasn’t received even the first of a series of approvals it needs from the federal government before it can be manufactured, and a factory promising 650 jobs remains unbuilt.

ApiJect Systems Corp. positioned itself as the company that would make the difference between a stumbling rollout and delivery of lifesaving vaccines. But as the U.S. vaccine rollout hits full stride, with about half of adults in the U.S. having already received at least one injection, the need for ApiJect’s device has waned, leaving the contracts and loans in question.

The company said in a statement to NBC News that it “is working with several vaccine pharmaceutical companies to conduct the testing and regulatory reviews of Covid-19 vaccines in the ApiJect syringe.”

However, a spokesperson for one of the vaccine makers Pfizer, said that even if ApiJect’s syringe got all the necessary approvals from the Food and Drug Administration, it would “not have any impact on our output or process.” Moderna didn’t respond to a request for comment, and Johnson & Johnson declined to comment.

According to ApiJect, two vaccine makers have requested FDA approval to use its syringe with their products, but neither federal regulators nor any of the vaccine makers would confirm any approval requests. ApiJect didn’t provide the names.

ApiJect’s plant is supposed to be built in an industrial park in North Carolina, but Morgan Weston, a spokesperson for the foundation that runs the park, said that the plant hasn’t been built and that “they have not moved their operation in on any level.” She referred all other questions to the company.

ApiJect spokesperson Steve Hofman said the land in North Carolina has been cleared and graded for construction. He wouldn’t elaborate further about when construction would begin.

When President Donald Trump triggered the Defense Production Act to fight the pandemic in May, he established new authority to finance U.S. companies that wanted to make much-needed medical supplies — an effort that quickly stumbled. A $765 million loan to Eastman Kodak stalled in August after it was announced prematurely. An inspector general’s report found no misconduct, but Congress continues to investigate the loan, said a spokeswoman for Rep. James Clyburn, D-S.C., chair of the Select Subcommittee on the Coronavirus Crisis. The project was never restarted.

The Trump administration also approved a Defense Production Act loan for ApiJect of up to $590 million. In all, the administration awarded the company nearly $1.3 billion in loans and contracts last year. In addition to the Defense Production Act loan, there was a Department of Health and Human Services contract at the end of January worth up to $453 million, just as the pandemic was emerging, and then a Defense Department contract in May worth up to $251 million.

When the Pentagon announced the ApiJect contract, it said the contract would “enable the manufacture of more than 100 million prefilled syringes for distribution across the United States by year-end 2020.”

The Defense Department also touted its pandemic relief work with a timeline that gave the same time frame and volume for ApiJect’s syringe production.

The company maintains that it was committed only to ramping up the capacity to make that many syringes, but in a news release in May, it said it would use the government money “to Supply 100 Million Prefilled Syringes for COVID-19 Response by Year-End 2020.” The release also said it would “create a surge capacity to supply … more than 500 million in 2021.”

While ApiJect didn’t deliver 100 million syringes by the end of the year, it has met its obligations under its federal contracts and loan commitments, in part by lining up a subcontractor that promises to be able to produce the syringes if they are approved by the FDA.

Both the Pentagon and HHS have said ApiJect is compliant with the terms of its contracts, and the agencies have set aside $147.6 million in federal funds, which could rise with FDA approval.

The loans and the contracts came about when alarms were being raised inside and outside the federal government about whether the U.S. would face a syringe shortage when vaccines became available. As NBC News has reported, HHS whistleblower Rick Bright warned colleagues in an email March 12, 2020, that “It could take two plus years to make enough [syringes] to satisfy the U.S. vaccine needs for a pandemic.”

But the vaccine rollout wasn’t stymied by a lack of syringes.

Meanwhile, the $1.3 billion in federal loans and contracts to ApiJect haven’t led to any ApiJect syringes’ entering the country’s medical supply, because the company doesn’t yet have any of the FDA approvals for its needles to work with coronavirus vaccines.

The company’s syringe is more complicated than a typical needle. Unlike syringes that are filled by doctors or nurses just before patients are injected, ApiJect’s device would be prefilled with a vaccine before being shipped to hospitals, pharmacies and vaccination centers.

The technology hasn’t been approved in the U.S. for any use. The FDA must approve not only the device’s needle design, but also the needle’s use with specific Covid-19 vaccines. The FDA would have to determine that storing vaccine in ApiJect’s syringe didn’t cause problems, such as corroding the syringe’s plastic. The approvals are requested by the vaccine maker, not by ApiJect. According to ApiJect, two vaccine makers have submitted the syringe for approval for use with their vaccines, but NBC News couldn’t confirm that.

A senior HHS official in the Trump administration said it was surprising that the FDA hadn’t approved the device yet, because approval of the vaccines had been expected to be quick.

An FDA spokesperson declined to comment on ApiJect’s proposal, referring to a policy of not issuing public statements about medical device applications.

Exact records of how much ApiJect has gotten aren’t yet public. Hofman, the ApiJect spokesperson, said ApiJect has invoiced HHS for $1.3 million and declined to say how much it has billed the Pentagon, which has set aside $138 million under the contract. Neither HHS nor the Pentagon would say how much they had been billed.

Meanwhile, ApiJect needs to raise about $197 million to help secure the additional $590 million federal loan. Jefferies Financial Group Inc. is working to raise the money through private sources. Hofman said the loan is close to being finalized but declined to predict when it would be completed, citing ongoing due diligence by the federal government.

Although ApiJect got its federal loan and contracts as part of efforts to increase domestic production of medical supplies, if the FDA approves its syringes, they would first be produced by the Chinese-owned company Ritedose’s facility in South Carolina.

The federal loan to ApiJect is through the U.S. Development Finance Corp., an agency the federal government established to help developing countries pay for needed projects, like low-income housing in Costa Rica and small-business microloans in Cambodia. The agency declined to comment about the loan specifically, but it said the Defense Production Act loan program “has a pipeline of applications for critical projects.”

“These applicants are in various stages of our stringent diligence process,” it said.

Hofman said it’s important for a company like ApiJect to be supported in the U.S. to expand the country’s domestic production of syringes so it can rely less on overseas manufacturers. Last year, “there was a concern that we would run short in these things,” he said, adding, “Everybody was highly critical, rightly so, of the lack of planning on other elements of the response to the pandemic.”

And ApiJect syringes could still play a key role in getting vaccines to Americans, especially if booster shots are needed.

“We do not know, sitting here today, what demand for injectables in this pandemic will be, not only in the United States, but in the rest of the world,” Hofman said. “So the idea that the United States supported an option to create significant new domestically based capacity with a very, very strong supply chain — we have always thought as a public policy matter that was absolutely the right thing to do.

“The fact that we are the ones doing it — we recognize our obligation to perform and to do what we’re supposed to do,” he said.

This report is part of an ongoing collaboration with the Global Reporting Centre on global supply chains.