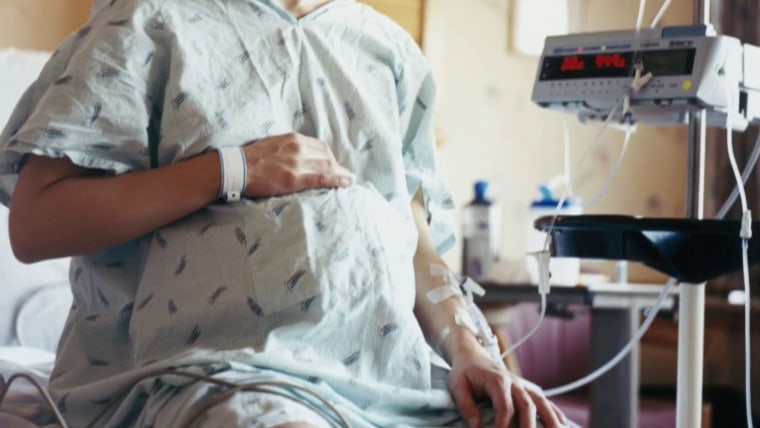 If the Supreme Court overturns Roe v. Wade, the decision would most immediately and directly affect more than 300,000 women who are pregnant now or will be before July in the 13 states with so-called trigger laws.

That’s the number of people who — according to an NBC News analysis of 2017 data from the U.S. Census Bureau and the Guttmacher Institute, which supports abortion rights — would see their states’ abortion policies change while they’re still at points in pregnancy when they might have otherwise been eligible for abortions. The laws that determine their options, in other words, would transform almost overnight.

Because the leaked Supreme Court draft opinion published by Politico last week is just that — a draft — conversations about its implications have stayed in the realm of hypotheticals. But it doesn’t feel hypothetical to Sarah Carpenter, who is six months pregnant in Louisiana.

Carpenter said she had a miscarriage in September, and it opened her eyes to how much can go wrong between conception and birth. Relative to that, she said, this pregnancy feels “pretty easy” even though she regularly throws up so forcefully that blood vessels in her face burst.

Still, Carpenter worries about worst-case scenarios, as many expectant parents do. That anxiety has been amplified by the prospect of Louisiana’s trigger law.

“I am now 26 weeks pregnant, very much want this baby, the nursery is done,” she said. “But if we go into another anatomy scan and their brain isn’t developed or their heart doesn’t develop, if there is something that is not compatible with life, what would that be like?”

Currently, Louisiana allows abortions up to 22 weeks, with exceptions after that if the baby won’t survive or there’s a severe threat to the mother’s physical health. Carpenter’s baby is already viable, though she will likely still be pregnant in late June, when the court’s decision is expected. If Roe is overturned, all abortions in Louisiana would become illegal unless the mother’s life is at stake.

“Being pregnant, I want the full panoply of options available to me if something were to go wrong — being able to have the choice of what’s best for me and my husband and my current kids and the baby,” she said.

Decisions about terminating for medical reasons

The majority of U.S. abortions occur at or before nine weeks of gestation, according to the Centers for Disease Control and Prevention.

Around 6 percent of U.S. women seek abortions due to concerns about their own health, according to a 2013 survey. A study in 2015 found that around 4 percent of abortions happen in wanted pregnancies, often because of issues like fetal anomalies. Termination for that reason often occurs later in pregnancy, at or after 21 weeks. That’s because ultrasounds don’t usually give a clear picture of abnormalities until around 18 to 20 weeks, and patients must wait until nearly halfway into pregnancy to get tests like an amniocentesis to diagnose genetic disorders. The Supreme Court’s Roe decision is likely about seven weeks away.

Even in states that will continue to allow abortion until the point when a fetus could survive outside the womb — around 24 weeks after the start of the mother’s last period — that still gives some people just a week or two, or perhaps less, to decide whether to terminate after discovering a fetal abnormality or other issue.

That was the case for Denise Miller, a teacher outside of Philadelphia, who discovered at around 21 weeks of pregnancy in 2005 that her baby had signs of a rare birth defect that would leave one side of its heart underdeveloped. By 23 weeks, Miller still didn’t have the final results of her amniocentesis, but Pennsylvania law bans abortions after 24 weeks.

“Right away, they told us that we really had to make a decision: Did we want to continue the pregnancy?” she said.

Jennifer Hoskovec, former president of the National Society of Genetic Counselors, said overturning Roe could force some people to make even less-informed decisions about a pregnancy.

“The more restrictive these anti-choice laws are becoming, the more we’re forcing patients to make decisions or to think about making decisions perhaps with more limited information, or just removing their option to make decisions,” she said.

Miller and her husband made the painful choice to terminate. Two days later, they got the amniocentesis results: The fetus also had a severe case of a chromosomal disorder called DiGeorge syndrome.

“It would have been a very short, painful, difficult life, so it did reassure us that we felt like we had made the right choice,” Miller said. “Of course, we were devastated. I feel like it was the darkest point of my entire life.”

Miller is now an administrator of a support group called Ending a Wanted Pregnancy. Its members are devastated by the prospect of Roe being overturned, she said.

“A lot of people have had to step away from social media because it’s just so triggering right now,” Miller said.

But Angie Thomas, associate director of Louisiana Right to Life, said that in cases involving fetal abnormalities, “even if your child is not perfectly healthy, that child deserves to be loved and deserves to take their first breath of air.”

Thomas’ organization is excited by the prospect of an abortion ban in Louisiana.

“For 50 years now, we’ve tried to, of course, overturn Roe v. Wade because we believe that human life begins at conception,” she said.

Some pregnant women fear for their own health

Michelle Baker, a Texas resident who’s six months pregnant, said she worries about whether her state’s trigger law might affect her physical health. Texas already allows private citizens to sue anyone who provides abortion care or helps someone obtain an abortion more than six weeks into pregnancy. But if Roe is reversed, the state’s trigger law would ban all abortions except to prevent death or serious injury of the mother. Baker said she’s concerned about how doctors might interpret that exception in the law.

“If something were to happen by the time that I’m giving birth, let’s say there’s a complication, are they even going to try to save my life?” she said.

Horton, too, said if she gets pregnant again someday, the gray area around exceptions in Utah’s trigger law would be stressful.

“If something were to go wrong, that actually does really scare me, if I were to have an ectopic pregnancy or a miscarriage and somebody were to misinterpret the facts,” she said.

But Thomas pushed back on these types of concerns. Abortion bans, she said, have “nothing to do with real medical issues that are very painful and dangerous” for the mother.

After Texas instituted its six-week abortion ban in September, some pregnant people there sought abortions in Oklahoma. When Oklahoma instituted its own six-week ban last week, clinics started directing patients to Arkansas or Kansas. Already, abortion clinics in states without trigger laws have been preparing to accommodate an influx.

“I am coming from a place of privilege where I do have the means that I could travel out of state. We have family in California, so if we needed to, we could go somewhere else,” Horton said. “But I totally recognize that that’s not an option for everybody.”

Carpenter said the prospect of Louisiana’s trigger law exacerbated a desire she already had to move elsewhere.

“I have been made aware of how I am a woman more times than I can count here,” she said. “I bought a car last summer, and everyone was talking to my husband. I’m like, ‘I have the money. I will be writing you the check. You all can have the conversation with me.'”

Carpenter and her husband have started planning a move to Cincinnati — in her home state.

“Having a baby could kill me — like, actually,” she said. “Louisiana has one of the highest mother mortality rates in the country.”

Carpenter now plans to give birth to her baby girl in Ohio.

“I don’t feel discouraged having a baby in this moment,” she said. “There’s a lot we can do to raise our daughter to advocate for better.”