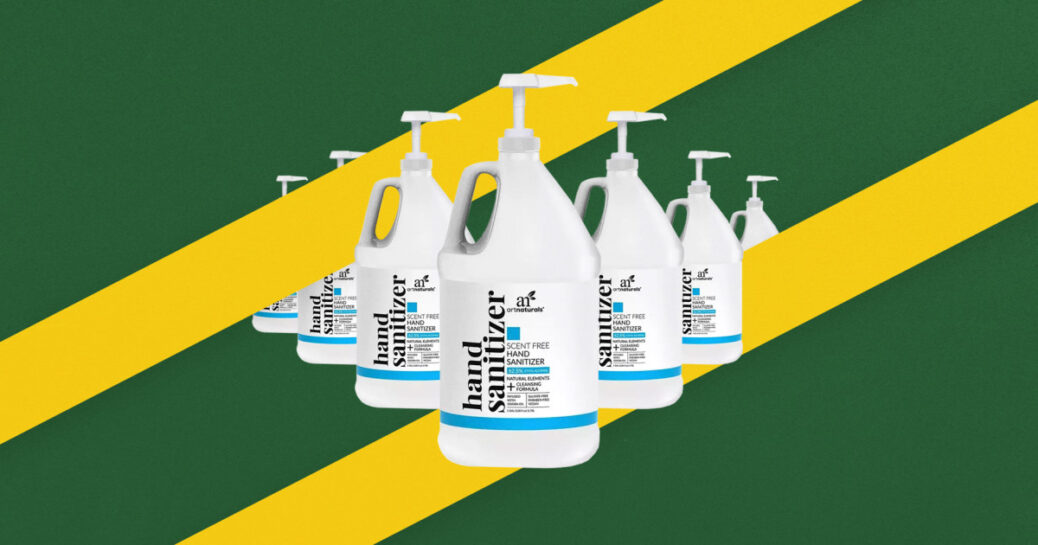 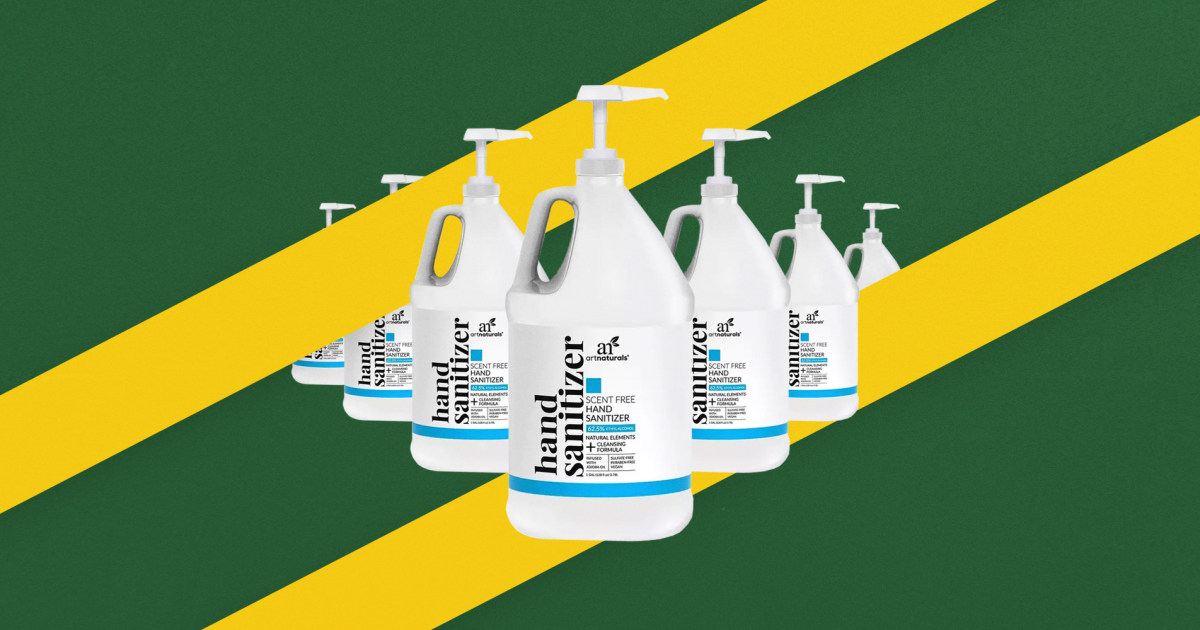 When Kayla Ridgely, a nurse in Queen Creek, Arizona, stumbled across bottles of hand sanitizer on sale for 99 cents at her local Walmart, it seemed like a gold mine. It was early in the pandemic, when cleaning products were in short supply, and the sanitizer was marketed as safe and plant-based, with a brand name that emphasized that messaging: Artnaturals, a company best known for its essential oils and hair products.

But earlier this year, Ridgely came across a study showing that the brand of hand sanitizer she had been using throughout the pandemic had sold bottles that tested positive for benzene, a solvent made from petroleum that is not allowed to be used in consumer products because it is carcinogenic.

Valisure, the lab that made findings about benzene in samples of Artnaturals sanitizer and other brands, had submitted a citizen petition in March asking the FDA to take action on Artnaturals and other hand sanitizer products. It also offered on its website to test more samples free of charge to anyone else who would send their sanitizer in.

So Ridgely submitted hers and received results in April that it was contaminated with benzene at levels of 13 parts per million — thousands of times above the EPA’s benzene limits of 5 parts per billion in drinking water, and more than six times above the FDA’s temporary guidance during the pandemic allowing trace amounts of benzene in over-the-counter drugs.

“The toxicity of benzene has been known for over 120 years. It’s directly linked with causing leukemia in humans. It’s a group one carcinogen, it’s at the top of the FDA list of chemicals not to use in manufacturing,” David Light, the CEO of the Valisure lab, said.

His lab’s research into hand sanitizers was the start of a disturbing trend. Over the past year, Valisure tests have found benzene in everyday consumer products like sunscreen, antifungal sprays and most recently, antiperspirant sprays. According to a Nov. 3 petition that Valisure sent to the FDA, some samples of Old Spice antiperspirant had levels of benzene at 17 parts per million. The brand’s parent company P&> did not respond to NBC News’ request for comment.

Consumers are left largely in the dark about the scope of the problem. In the case of hand sanitizer, regulators and industry have been slow to act, according to consumers and experts.

Ridgely, the nurse who bought the Artnaturals hand sanitizer that Valisure said was contaminated, wrote to Walmart in March and said the retailer never responded. She also left a comment on the Artnaturals Facebook page. The company responded to Ridgely in the thread by saying they were considering suing any publication that wrote about the findings.

“Simply put, the inaccurate article publishing misleading results about our product was 100 percent wrong,” Artnaturals repeated in emails and Facebook comments to customers reviewed by NBC News. The company did not clarify which “inaccurate” article or study they were referring to.

Six months later, on Oct. 4, the FDA published a notice that it had found “unacceptable levels of benzene,” as well as the toxic chemicals acetaldehyde and acetal in Artnaturals hand sanitizers, and said that the company had been ignoring the agency’s attempts to discuss the contamination. On Oct. 26, Artnaturals announced that it would voluntarily recall a limited amount of its 8-ounce Scent Free Hand Sanitizers, labeled with the lot number G20128A. The company assured customers through the FDA that “product purchased from Walmart, Target, Costco, RiteAid, Publix, HEB and Amazon were not affected.”

But Ridgely said she bought the contaminated hand sanitizer at Walmart and, according to her test results, it was not labeled with any lot number. Walmart did not respond to a request for comment from NBC News.

Artnaturals continues to insist that its sanitizers are not contaminated with benzene. “Out of an abundance of caution, Artnaturals retested all alcohol products and confirmed that those items are free from impurities and are safe to use,” Joseph Nourollah, the CEO and founder of Artnaturals, said in an emailed statement to NBC News. He did not answer a list of specific questions or comment directly on the Valisure lab’s work.

Informed of Ridgely’s test results, the FDA’s press team sent a statement to NBC News on Nov. 4: “To date, the scope of overall contamination is still under investigation and FDA is urging consumers not to use any Artnaturals hand sanitizers.”

The situation highlights regulators’ lack of authority over over-the-counter-drug products like hand sanitizers. The FDA can’t force recalls on over-the-counter drugs, but it can pressure companies to do so voluntarily through public warnings.

“The FDA itself asks companies to investigate. It’s really up to the company to either do a recall or not and to define the scope of the recall,” Light said. The contaminated Artnaturals samples “could have been at Walmart or other places or not — this is all kind of proprietary information to the manufacturers, and we have no way of knowing.”

The agency can also inspect manufacturing facilities but would not tell NBC News if it had done so in this case as a matter of policy. “Hand sanitizer safety remains a priority for the FDA as we continue to test hand sanitizer products,” the agency told NBC News in a statement. “The agency proactively works with companies, when appropriate, to recall products and consistently works with retailers to remove products from store shelves and online marketplaces when quality issues arise.”

Valisure came across the contaminated hand sanitizers by accident, Light said. His lab’s main source of business is contracting with pharmacies, testing over-the-counter and prescription drugs for impurities before they are sold to their own customers. His team had only recently added testing for benzene to its suite of analytics, at the suggestion of an employee.

Light hadn’t expected to find benzene in the pharmacy products, since it is banned. But then hand sanitizers kept failing his lab’s purity tests, and they decided to look into the issue further.  “Not only did we see some products that had benzene in it, it appeared to be a broad problem,” Light said.

Valisure also found elevated levels of benzene in sanitizer made by the company Scentsational Soaps & Candles, which in response issued a voluntary recall in April after confirming the presence of benzene and other contaminants. In a separate citizen petition published in May, Valisure said it found benzene in 78 batches of sunscreen and after-sun care products made by major brands including Neutrogena, Aveeno and CVS Health. Neutrogena and Aveeno parent company Johnson & Johnson announced on July 14 that it was recalling the batches of sunscreens “out of an abundance of caution,” and CVS Health said it would stop selling batches of its aloe vera sprays for the same reason. Bayer recalled its antifungal sprays Tinactin and Lotrimin on Oct. 1.

The FDA shouldn’t have waited until October to warn the public that Artnaturals wasn’t recalling its sanitizers with benzene, according Michael Carome, an expert on drug and medical device safety with the group Public Citizen.

The agency “should have acted sooner and they took too long to do so in this case. And unfortunately, that’s all too common,” Carome said.

A common problem since the pandemic

Contaminated hand sanitizers have been pervasive throughout the pandemic. In response to hand sanitizer shortages, the FDA allowed manufacturers to temporarily make it from lower grades of ethanol, as long as companies agreed to test the ethanol for traces of benzene to make sure it didn’t exceed 2 parts per million. “That sort of opened the door to companies manufacturing hand sanitizer to use less than the best grade of ethanol,” Carome said.

Since the onset of the pandemic, more than 250 batches of hand sanitizer have been marked by the FDA as contaminated. The FDA recently withdrew its rule allowing for lower grades of ethanol in sanitizer. It’s unclear how benzene would have ended up in sunscreen or antiperspirant.

“Benzene is an extremely cheap solvent. From a chemical perspective, it’s a great solvent, and it works very well to make chemicals,” Light added. “But as the FDA itself says, very clearly, it should not be used for that.”

Artnaturals produces skin care products, hair care and essential oils at a warehouse in Gardena, California, outside Los Angeles. The company’s sales were about $100 million in 2019 and mostly came through online advertising. About 20 percent of its products are sold through major retailers, according to a 2019 report about the company in a trade magazine. Its beauty products are not affected by the voluntary recall and are still for sale at stores. The company’s stated mission is to use the “finest ingredients and extracts from around the world to handcraft health-conscious essentials for your skin, hair and body, mind and spirit.”

Stephanie Hanson was recovering from neurosurgery last year and did a Google search for natural hand sanitizer to prepare for the pandemic. She purchased a package in bulk directly through the Artnaturals website, after being sold on the brand’s holistic message. Now she’s waiting for her lab results from Valisure to see if the samples she used were possibly contaminated with benzene. (A representative from the lab told her they would start testing her sample at the end of last week.) She also wrote an email in June to Artnaturals about her concerns. The company responded assuring her that its hand sanitizer was vetted and found to be safe by a lab called Micro Quality Labs, which has not responded to messages from NBC News.

Artnaturals did not respond to multiple requests to see the Micro Quality Labs report they cited.

“I’m sure you are not surprised we are contemplating legal action against any publication stating inaccurate information,” Artnaturals customer service said in the form email to Hanson.

By late October, Artnaturals hand sanitizer could no longer be purchased from the websites of Walmart or Amazon, but was still being sold in bulk on GroupOn by Virgin Scents, Artnaturals’ parent company. A billboard for Artnaturals hand sanitizer advertising that it was 99 cents at a local car wash, was also spotted by residents of Carson, California, where the company is the subject of a lawsuit filed by eight residents over a fire at its warehouse that residents allege contributed to the pollution of a local waterway. (The fire is under investigation by the arson division of the Los Angeles County Sheriff’s Department, according to the county fire department. Artnaturals declined to comment on the lawsuit or the fire.)

The FDA says that consumers who have any products on its list of contaminated hand sanitizers should dispose of them in a hazardous waste container.

“I don’t think people who use  these hand sanitizers should panic that now they’re going to get cancer. But cancer is due to a bunch of factors,” Carome said. “We need to do everything to minimize risk. And one easy way to do it is not expose people to benzene.”