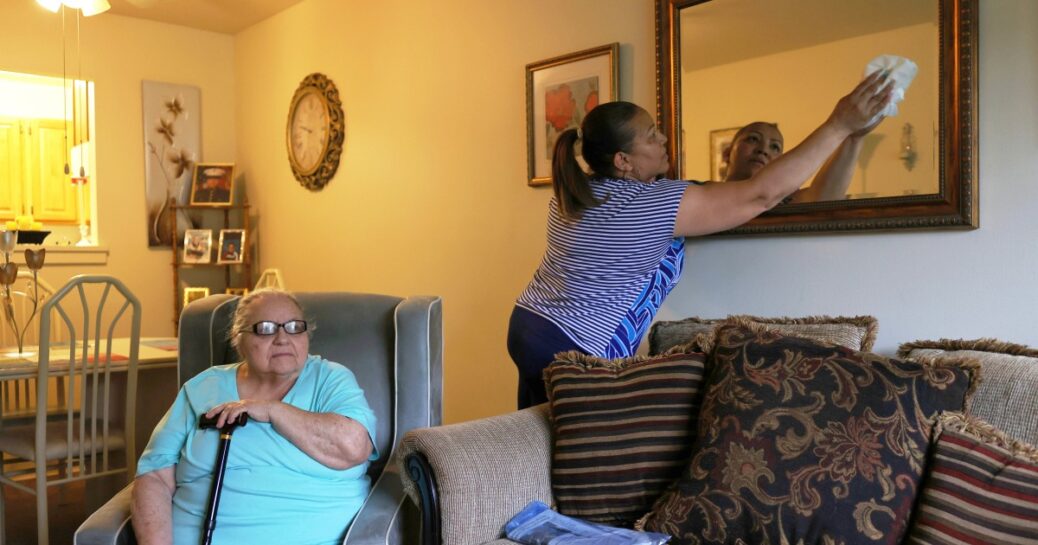 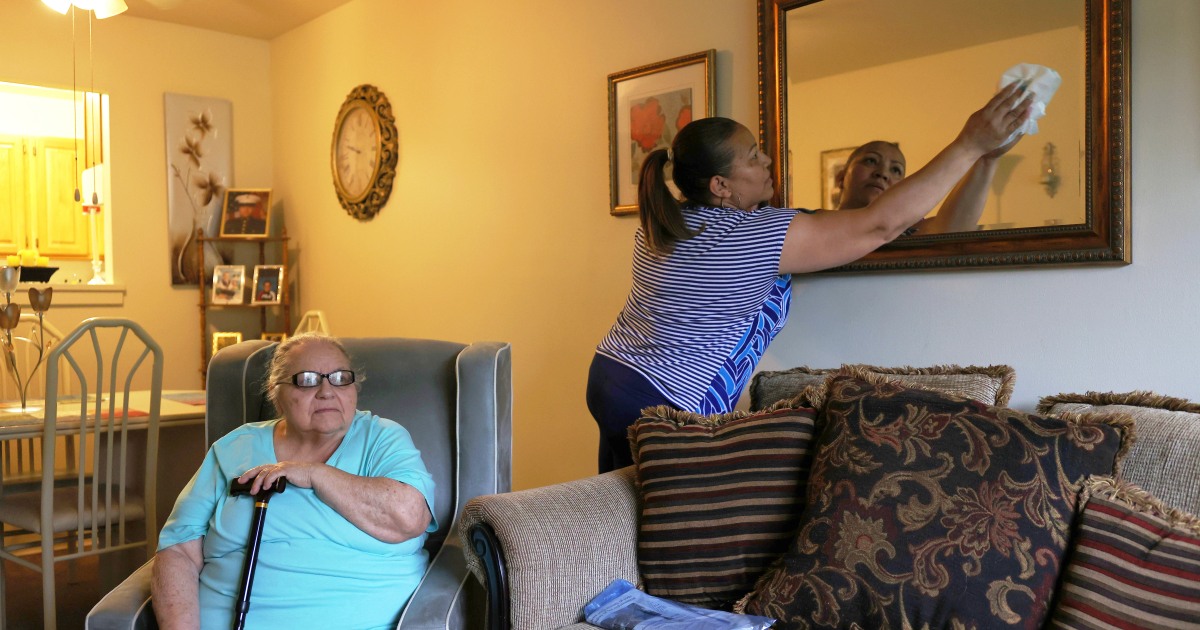 Eduardo Covarrubias retired from his job as a museum security guard in Washington, D.C., 14 years ago and moved to Casa Iris, an affordable housing community for older adults.

The complex has 39 one-bedroom, 1,000-square-foot apartments for people ages 62 and older that cost a maximum of $813 per month, depending on income. To compare, the average one-bedroom apartment in the nation’s capital runs $2,213 monthly.

“It’s peaceful. There are good people living here and the administration is very efficient,” Covarrubias, 79, said in Spanish, adding that he would have had to move back to his native Bolivia long ago if not for Casa Iris.

Older Latinos already face housing, health and caregiving challenges, and concern is growing that as the “browning of the graying” of America continues, as longtime UCLA public health researcher David Hayes-Bautista has written, the economic and social impact on Hispanics and the U.S. will be significant.

Consider the numbers. The Urban Institute estimates that the number of all Americans ages 65 and older will more than double over the next 40 years, reaching 80 million in 2040. Latinos made up 8 percent of the older population in 2016. By 2060, however, that percentage is projected to reach 21 percent, according to the Department of Health and Human Services.

Although the need for affordable Latino senior housing is high, Washington, D.C., has just two such facilities, including Casa Iris, founded in 1997. It is owned the National Hispanic Council on Aging, which also runs a similar facility called Mira Vista in Garden City, Kansas.

Casa Iris property manager Pedro Lima said many Latino seniors seeking affordable housing can no longer work, have limited English-language skills and haven’t been able to save as much since they’ve sent a lot of money to family in their home countries. At the same time, U.S. housing costs have risen.

At Casa Iris, tenants benefit from having Spanish-speaking staff and being around other Latinos. At least 75 percent of Casa Iris renters must be Latino and all must be low-income, Lima said, adding that currently, all but five residents are Hispanic.

With help from a city grant, a bilingual volunteer helps tenants make Department of Motor Vehicles and doctors’ appointments and arranges free shuttle services for their visits. Post-pandemic, Lima hopes to launch a program with a psychotherapist in which residents can talk about their shared experiences.

“With Covid, many have shown signs of depression,” Lima said. “They’ve been by themselves for too long.”

While mental health is important, so is the physical health of older Latinos. Hayes-Bautista, a professor of public health and medicine and director of the Center for the Study of Latino Health and Culture at the UCLA School of Medicine, said challenges will grow as the older Latino population expands and their life expectancy remains longer than average.

He said Latino longevity can be attributed to good behaviors, such as less smoking and drinking than the general population. Health issues that do arise tend to be job-related — from agriculture or industry.  Coupled with that is the lack of access to health insurance and access to health care.

“When Social Security was instituted, then Medicare built on top of it, the assumption was that at age 65, Latinos would get both,” Hayes-Bautista said. “That is not the case because some industries were exempt from Social Security — agriculture was exempted, domestic service was exempted.”

As a result, many of today’s Latino seniors did not pay into Social Security, and likely did not have a private retirement pension, either. “So that means Latino elderly tend to have Medicare coverage at far lower rates. They have to rely on Medicaid and Medicare,” he said.

The pandemic shined a light on the health discrepancies that already existed, he said. In California, for example, his center reported that coronavirus death rates were from two times to seven times higher for Latinos than for non-Latino whites from summer 2020 through winter 2021.

“[Latinos] are excluded from programs that reach all elderly, so they have less access to health care, pensions and publicly-financed retirement programs and Medicare,” Hayes-Bautista said. “So how do they get tested, vaccinated and treated when they get ill?  All of these things add up.”

The lack of access to affordable housing and good health care can create a perfect storm in which family members often assume caregiving duties for sick, elderly parents or grandparents. The National Alliance for Caregiving report found that Latino caregivers tend to be younger (43.4 years) than other caregivers, live with the person they care for, work full time while also providing care, and report high levels of financial and physical strain.

To help Latino caregivers, AARP launched a program called Ayudando a Quien Ayuda, or Helping the Helper, in Los Angeles County that offers free, personalized support, volunteer Yolanda Becerra Jones said, adding that it may expand to other cities.

Participants dial 2-1-1, ask for Helping the Helper, and a bilingual adviser will describe the program and send contact information to the University of Southern California’s Family Caregiver Support Center. The center then helps caregivers coordinate hospice, respite care, workshops, legal services, meal delivery programs, training and even self-care for themselves.

Jones, 73, began volunteering with the AARP after she retired eight years ago. The caregiving component is especially important because of her experience caring for her own mother long before a program like Ayudando a Quien Ayuda existed.

“When my mother got very ill, we had to step in to do the caregiving,” she said referring to her siblings. “It was really difficult. We were working full time and spread across L.A. County. It would take hours to get someplace on the freeways. We felt out there on our own.”

A program like Ayudando a Quien Ayuda, Jones said, works because it is “very specific to the Latino community” and is mindful of the cultural components, vocabulary and how families take care of loved ones — and themselves. “Many times Latino caregivers don’t take care of themselves. Their own health starts to deteriorate.”

As for Covarrubias,  a combination of health and housing concerns may end his time at Casa Iris. His recovery after three spinal surgeries is going slowly, and he is finding it difficult to get around with a walker. “Once I get a little better, I may move back to Bolivia,” he said.

This article was written with the support of a journalism fellowship from The Gerontological Society of America, The Journalists Network on Generations and the RRF Foundation for Aging.