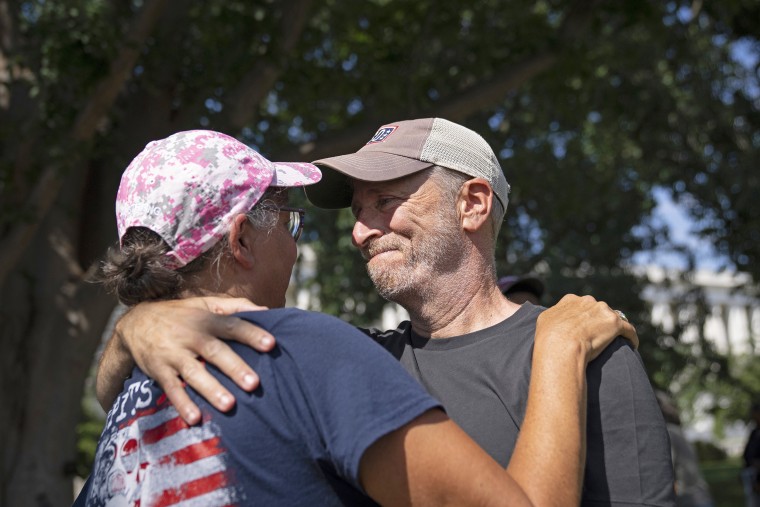 The 86-11 vote came after Republicans agreed to lift their blockade of the popular bill, caving to pressure from more than 60 veterans groups — and comedian Jon Stewart — who had railed against Republicans for days outside the Capitol.

Many of the veterans who had camped on the Senate steps, braving heat, humidity and thunderstorms, watched the vote from the gallery in the Senate chamber. The bill has already cleared the House and now heads to President Joe Biden’s desk for his signature.

It’s “very emotional. [These are] tears of joy and relief,” said Jen Burch, 35, a retired Air Force staff sergeant who suffers from numerous ailments she believes were caused by exposure to burn pits and open sewage ponds in Afghanistan.

“This is our night to celebrate, but we have more work to do to continue advocating and to ensure the [Department of Veterans Affairs] does their job in implementing this legislation for our veterans.”

“Once the President signs this bill into law, we at VA will implement it quickly and effectively, delivering the care these Veterans need and the benefits they deserve,” McDonough said in a statement.

Biden lauded the bill’s passage Tuesday evening, calling it a “lifeline” to families who had lost a loved one because of toxic exposure.

“Congress has delivered a decisive and bipartisan win for America’s veterans,” Biden said in a statement. “For the millions of veterans who may have been exposed to harmful toxins, this bill means quicker access to health care services and other benefits. This could be the difference between life and death for many suffering from toxic related illnesses.”

Majority Leader Chuck Schumer, D-N.Y., speaking on the Senate floor, said that with passage of the PACT Act, “veterans across America can breathe a sigh of relief.”

He then joined Veterans’ Affairs Committee Chairman Jon Tester, D-Mont., to thank the vets outside the Capitol for their advocacy. “The treatment that they have deserved and have needed but have been denied because of the VA, because of all sorts of legal barriers and presumptions, will now be gone.

“Veterans who were exposed to the toxic fumes of burn pits will be treated by the VA like they should have been from the very beginning,” Schumer added.

Sen. Pat Toomey, R-Pa., had been one of the Republicans holding up the bill as he demanded a vote on his amendment to put spending guardrails in place to ensure some of the massive $280 billion package over 10 years couldn’t be spent on “completely unrelated programs.” Democrats disputed Toomey’s characterization, saying the money would only be spent on veterans.

Toomey had insisted that his amendment be brought to the floor with a 50-vote, simple-majority threshold. In the end, he and other Republicans gave into Schumer’s demands that three GOP amendments would receive votes with a higher 60-vote threshold, essentially ensuring their defeat. All fell well below that bar.

The Senate had already voted 84-14 to pass the burn pits bill in June, but 25 Republican yea votes reversed course when the legislation came up again last week, with many echoing Toomey’s spending concerns and arguing that Democrats did not give them a chance to amend the package. Democrats and veterans argued, however, that many Republicans were voting against the bill in retaliation for the massive deal on climate change, health care and taxes that Democrats had just crafted.

With some veterans literally sleeping on the steps on the Capitol over the weekend, the Republican blockade became increasingly untenable.

“I think they’re fraying in terms of their ability to withstand this,” Stewart, who has also fought for funding for 9/11 first responders and their families, told NBC News before Tuesday’s deal was announced.

“I think this is cruel and unusual punishment that’s going on and they’ve got to end this.”

Scott Wong is a senior congressional reporter for NBC News.