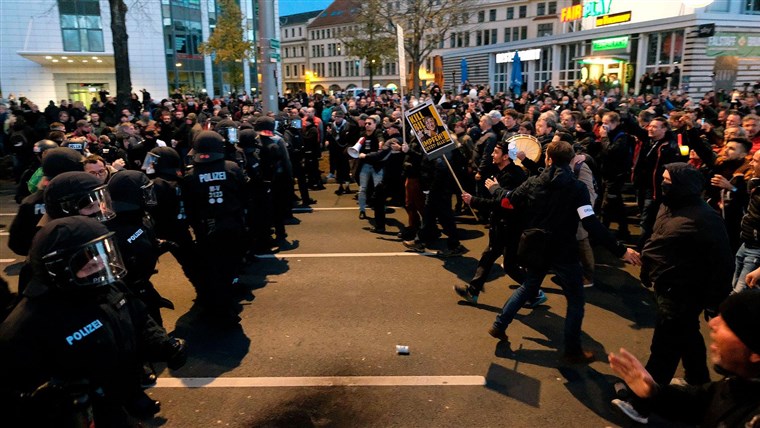 LONDON — Germany followed several European countries by reporting a record number of daily coronavirus cases on Saturday, as a second wave of infections sweeps through the continent as winter approaches.

German Chancellor Angela Merkel’s government flattened the curve this spring and was lauded for its response to Covid-19, which saw the country introduce widespread contact-tracing.

But the national disease control center, the Robert Koch Institute, reported 23,399 new cases between Friday and Saturday, a daily record for the country.

It brought the total number of recorded cases in Germany to over 600,000. A total of 11,226 deaths have been reported in the country.

This increase came despite bars, gyms and theaters being shut since Monday, under measures agreed between Merkel and the heads of regional governments. However, schools will stay open and shops will be allowed to operate with limits.

“The light at the end of the tunnel is still quite a long way off,” Merkel told a news conference after the measures were introduced. She added that if Germans reduced their contact in November, they could be able to do more over Christmas.

Despite numbers rising, Germany has still been able to take in patients from its neighbors, the Netherlands, and Belgium where hospitals are reaching their limits.

Greece also began a three-week nationwide lockdown on Saturday, its second this year.

Prime Minister Kyriakos Mitsotakis said he was forced to act after a spike in cases, as he warned that without a lockdown, pressure on the healthcare system would be “unbearable.”

The country saw a 20 percent increase in confirmed infections in the past week alone, health officials said. It has now reported 52,254 cases and 715 deaths, according to John Hopkins University data.

Under new restrictions, high schools will shut along with most stores, with the exception of supermarkets and pharmacies. Greeks will also require a permit to venture outdoors at allocated times.

This brought the total number of confirmed cases in the country to 1.6 million, 100,000 less than Russia, which currently has the world’s fourth highest number after the U.S., India and Brazil.

France also reported 828 new deaths from coronavirus in the last 24 hours, with intensive care beds 90 percent full, a week after the government imposed a nationwide lockdown.

Many non-essential shops, cafes and hotels are closed in France, but schools remain open.

“We are all in the same position: overrun by a second wave which we know will be harder, more deadly than the first,” President Emmanuel Macron told the nation last week.

An outbreak of a mutated coronavirus strain that spread from mink in Denmark to a handful of people, prompted the United Kingdom to require all travelers arriving from the Nordic country to self-isolate on arrival, the British government said late Friday.

After resisting the prospect of a new national lockdown for most of last month, Prime Minister Boris Johnson ordered England back into lockdown on Thursday.

Britain, which has the highest death toll in Europe and has passed the milestone of 1 million cases, is facing a second wave of infections that threaten to overwhelm its national health service.

One of the worst hit nations which has recorded 862,681 cases and 40,638 deaths, according to an NBC News tally, the restrictions divide the country into three zones according to the severity of the latest outbreak. They are less strict than the blanket measures imposed when the pandemic pummeled the country in March.

Like other countries in Europe, Italy has seen an alarming resurgence of cases but many say they face lockdown fatigue, with anti-restriction protests breaking out in a handful of cities.

Andy Eckardt is a producer based in Mainz, Germany. He started this role in 1994.