Patience, walking and support: How some hospitals reduced C-sections for new moms 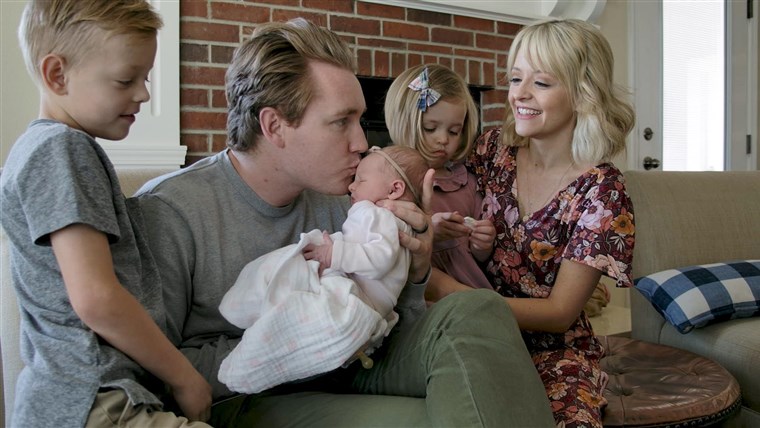 Melissa Petrus always knew she wanted a big family, so when she became pregnant with her first child, she was determined to do all she could to have a vaginal delivery.

She said she knew that having a cesarean section the first time would likely mean having another one in a future delivery. And C-sections carry risks that might limit how many children she could bear, she recalled thinking.

But when Petrus, who lives in Orange County, California, discovered that her first baby was in a breech position about a month before her March 2015 due date, she worried that a C-section was inevitable. For the next couple weeks, she did some “hocus pocus tricks” to try to get the baby to move into the head-down position, including doing handstands in the pool, putting sage on her toes and lying facedown on the couch.

Then, her doctor at Providence St. Jude Medical Center in Fullerton, California, attempted a procedure to manually flip the baby.

“It worked and I was able to deliver my daughter vaginally on her due date,” she said. “It was awesome.”

Petrus said she appreciated the support she received from her doctor and nurses to get through labor and delivery.

“Pushing was awful because it was my first, but they were super encouraging — saying to just keep going, don’t get tired, you can do it — and that was very helpful,” said Petrus, 33, who now has five children, all born vaginally at the same hospital.

If you had a C-section on your first birth, 90 percent plus of all your future births are going to be a cesarean.

Providence St. Jude Medical Center is one of many California hospitals that in recent years have followed statewide initiatives and implemented interventions to reduce C-sections in low-risk first births — those involving a single fetus in the head-down position at 37 weeks or after.

Results show the efforts are working: A recent study in the Journal of the American Medical Association found that the rate of cesareans in low-risk first births in California declined from 26 percent in 2014, before the coordinated efforts began, to 22.8 percent in 2019. By comparison, during the same time period, the rate nationwide stayed the same at 26 percent.

California’s achievement puts it just below the national public health target of 23.9 percent that was set by the Centers for Disease Control and Prevention in its Healthy People 2020 goals. Medical experts became concerned when C-section rates began rising in the 1990s, and the nation as a whole still has not met the goal. A new CDC report released this month found that the 2020 nationwide rate was 25.9 percent.

“These were pretty dramatic results for a state,” said study author Dr. Elliott Main, a professor of obstetrics and gynecology at the Stanford Medical School and medical director of the California Maternal Quality Care Collaborative. The group has been instrumental in California’s multifaceted efforts to support vaginal birth, also working with state agencies, nonprofits and health plans. “And there was no harm to mothers or babies by having a lower C-section rate.”

California’s efforts aimed to reduce C-section rates in several ways, including by educating doctors and nurses about national guidelines for labor and ways to better support women in labor, along with informing doctors about how their C-section rates compare to other physicians. In some cases, there were incentives, such as honorary awards for hospitals that met the target. A quality improvement program that kicked off in 2016 was available to participating hospitals with elevated C-section rates.

There’s no question that cesareans can be lifesaving for both mothers and babies when their health is endangered, Main noted. C-sections also are often performed in other situations, such as to deliver multiples or in cases of breech positioning. But in recent years, there has been a growing realization of cesarean downsides in cases where it’s less clear that the surgery is absolutely necessary, Main said, noting that doctors, for instance, are seeing more placental complications in pregnant women who’ve had a prior C-section. Cesareans also carry a risk of infection and hemorrhage, in addition to longer recovery that can make it hard to care for a newborn.

California’s efforts focused on first births because they generally involve more difficult labor and often determine the course of subsequent deliveries, he said. “We know that if you had a C-section on your first birth, 90 percent plus of all your future births are going to be a cesarean,” he said.

Nobody ever says that they did an unnecessary cesarean.

C-section rates in low-risk first deliveries vary widely across the nation, depending on the state, hospital and provider, with some hospitals having rates as high as 50 percent or more, according to Main.

“C-section rates shouldn’t be dependent on which door the woman walks through,” he said. “If she walks through one door, it’s very low, with another door it’s very high, even with the same level of risk factors, and that’s just not right.”

Why such a wide variation?

It’s not because so many women want to schedule their deliveries, Main said.

“There are always a few patients who want it, but it’s less than 1 percent in most studies,” he said. “Most of it has been driven by physician attitudes and nursing culture.”

“There’s a sort of loss of the value of having a normal birth,” he said.

Study co-author Dr. Melissa Rosenstein, an assistant professor of obstetrics, gynecology and reproductive sciences at the University of California, San Francisco, said it’s not that doctors have bad intentions “or that they are trying to do it just for convenience” but that challenging to try to determine if a patient who had a C-section would have been able to go on to delivery vaginally.

“Nobody ever says that they did an unnecessary cesarean,” she said. “All the providers think that there’s a reason. But I think that we were able to show that these reasons are fluid, and there are ways you can be more patient with labor and end up with a vaginal birth.”

Providence St. Jude Medical Center, where Petrus gave birth, started ramping up efforts to reduce first-time C-sections in January 2015, initially focusing on teaching nurses how to better support women in labor and encourage them to walk around more and change positions during labor, said Dawn Price, a nurse and the hospital’s executive director of women’s and children’s services, who helps oversee the program.

Then the hospital started providing educational sessions to physicians, with a doctor from the California Maternal Quality Care Collaborative coming out to talk about each physician’s C-section rates and how everyone could get to the goal.

“It’s that balance of monitoring the baby and observing the baby’s tolerance of the labor, as well as giving mom more support to have that labor, and not rush to interventions,” she said. The hospital also works to educate expectant women about why it’s best to avoid a first-time cesarean.

Like many other hospitals, its first-time C-section rate had climbed over the years.

“We got efficient at doing C-sections,” Price said. “So it almost got normalized that that was OK.”

But all that’s changed significantly. The hospital’s C-section rate in low-risk first births dropped from 34 percent when the program began to 19.9 percent in 2020, she said.

Dr. David Nelson, an assistant professor of obstetrics and gynecology at the University of Texas Southwestern Medical Center and chief of obstetrics at Parkland Health and Hospital System in Dallas, said the new study supports educating providers, standardizing labor management practices to promote consistency, and tracking C-section rates among physicians, all with the goal of helping other hospitals reduce rates.

It’s difficult for doctors to lower their cesarean rate without knowing what that rate is and how it compares to the target goal, Nelson, who co-authored an editorial that accompanied the study, said. “For us to effect change on the cesarean rate, it’s really important to measure and report the rate,” he told NBC News.

Before the success of the California program could be adopted in other states, it would be helpful to know which aspects of the big statewide effort had the greatest impact, Nelson said. That could allow other states to direct resources to the most effective and cost-efficient strategies.

“The findings from the California program offer hope for improvement,” Nelson said.

Experts also encourage women to talk with their doctors about any delivery concerns and ask about their C-section rates. In 2018, California launched the patient website MyBirthMatters.org that includes a video and other materials to educate women. “It’s very important that women feel empowered and supported in labor,” Main said.