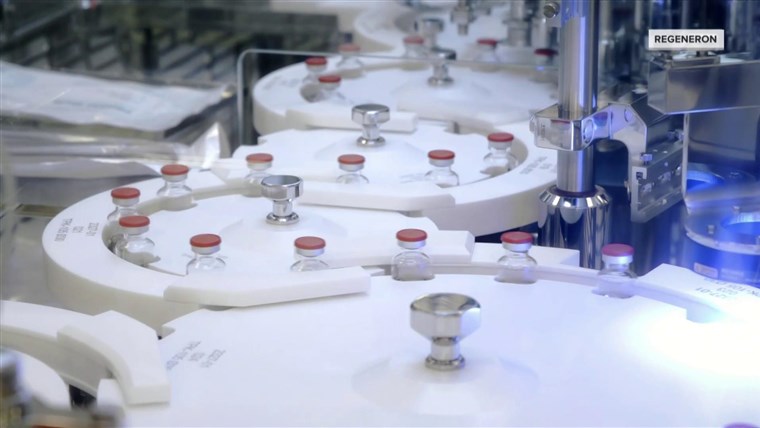 An experimental monoclonal antibody cocktail made by Regeneron and hailed by President Donald Trump as a “cure” was tested on cells derived, long ago, from fetal tissue — research for which Trump’s own administration drastically slashed funding just last year.

Trump received an intravenous infusion of the antibodies from the drug company last week as part of his treatment for the illness.

In a statement to NBC News, Regeneron spokesperson Alexandra Bowie said that the company used cells from a cell line called HEK293T. These cells date back to the 1970s and were originally taken from kidney cells in donated fetal tissue. Since then, the cells have become commonplace in research labs, thanks in part to the fact that they can replicate indefinitely, ensuring they never run out. Because of this, the cells are considered “immortalized.”

“HEK293T wasn’t used in any other way, and fetal tissue was not used in this research,” Bowie said. “We did not use human stem cells or human embryonic stem cells in the development of” the monoclonal antibody cocktail.

HEK293T cells have unique properties that make them very helpful in scientific research. Namely, the cells can be trained to produce proteins like little factories, Dr. Arnold Kriegstein, director of the stem cell program at University of California, San Francisco, said.

That’s beneficial to scientists studying Covid-19 treatments and vaccines, said Kriegstein, who is not involved with Regeneron’s research, because the cells can be taught to produce the virus’s so-called spike protein. That protein is unique to SARS-CoV-2, the virus that causes Covid-19, making it an excellent target for drugs and vaccines.

Indeed, Regeneron’s monoclonal antibody drug works by binding to the virus’s spike protein. Early in the drug development process, scientists used HEK293T trained to produce the protein to test whether the drug would, in fact, bind to it, Bowie said.

“The antibodies themselves weren’t made of any of these fetal cells,” Kriegstein noted. “But it was really critical to use these cells to test how effective their approach really was.”

Cells from fetal tissue have been a part of medicine for decades as scientists have used them to study conditions like birth defects, Alzheimer’s disease and AIDS, to name a few.

Kriegstein said that he wasn’t surprised to learn that these cells were used in development of Regeneron’s antibody drug and that they’re pretty widely used to test products like vaccines, for example.

“I think it’s very important to know that the public understands tissue is extremely important in a whole series of breakthroughs over the years, and will continue to be an important resource,” he said.

Three Covid-19 vaccine candidates that have received federal funding through the White House’s Operation Warp Speed have also used cells from fetal tissue in their research. AstraZeneca and Moderna both used the HEK293T cell line in early studies on their vaccines. Johnson & Johnson used a different cell line called PER.C6, also derived from fetal cells, to test its vaccine’s effectiveness against Covid-19.

Kreigstein said that in his experience most people don’t know what goes into testing lifesaving drugs.

“It would surprise people if they ever did find out exactly what goes into the production and testing of some of the treatments,” Kreigstein said. “And this is a perfect example.”