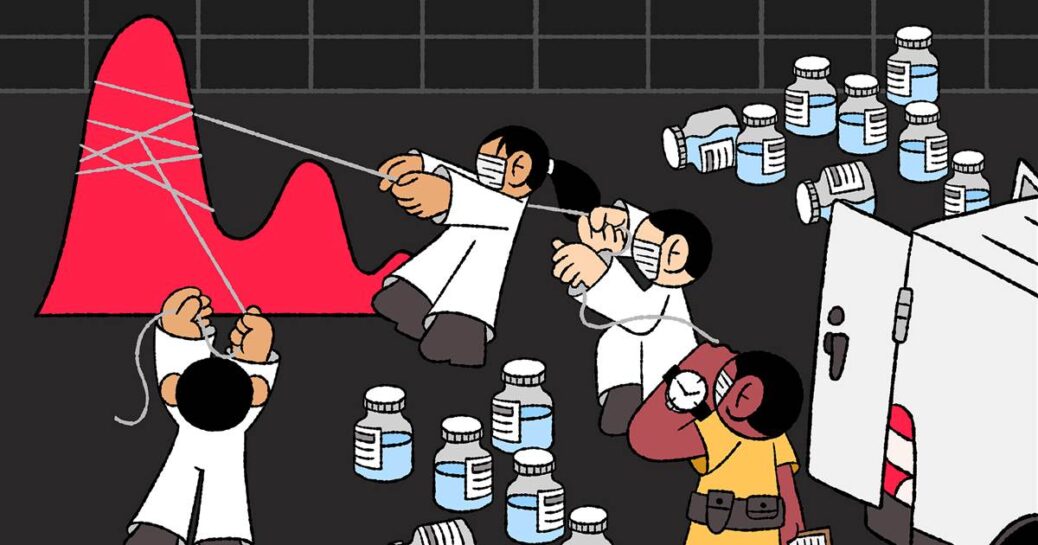 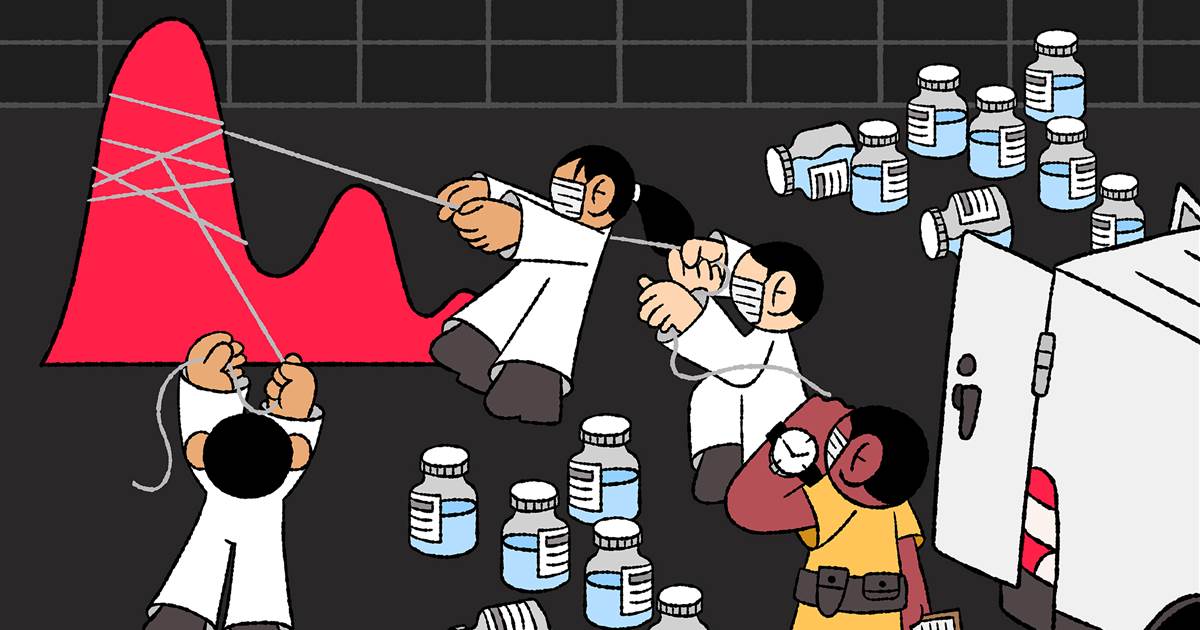 As states across the country rescale efforts to administer Covid-19 vaccinations, getting information on who has been given a shot is almost as daunting as the distribution itself.

With thousands receiving their second doses this week – and many officials debating whether to expand the groups eligible for vaccinations – blind spots are emerging: Some states still haven’t posted vaccination updates and the numbers released by the Centers for Disease Control and Prevention vary drastically from those released by state health departments.

What’s more, the CDC has been slow to show second-dose figures, and a spokesperson for the agency said that a percentage of those getting their second shots were initially mixed in with the first dose numbers, inflating dose counts for some states.

The majority of states have yet to release demographic data on who is getting shots, such as race, age and location – vital information in a pandemic that has disproportionately hit communities of color. Racial data in the medical examiner’s records led to reporting by WBEZ in Chicago that revealed that 70 percent of the city’s coronavirus deaths were Black.

In the early months of the pandemic, getting data on where outbreaks were occurring and who was dying of the virus was slow, difficult and often incomplete. The lack of information hid trouble spots like nursing homes and meatpacking plants in those early weeks. Back then, the federal government failed to track outbreaks at schools, and there were delays in monitoring positive cases by race. The federal government was slow to release that information and left the effort largely up to states, obscuring the full severity of the pandemic.

Almost a year later, history is already repeating itself, as data on the rollout is riddled with gaps, contradictions and delays.

“I’m going to say that there is no state that has an ideal information system right now in terms of the real-time public health information that we need,” said Howard Koh, a professor at Harvard University’s T.H. Chan School of Public Health.

Koh, formerly the assistant secretary of health and human services, made the comments during a media briefing last week on the vaccine rollout.

“Unfortunately we saw this already with the slow rollout of testing and all the confusion about testing,” Koh said.

The logistics of vaccinating an entire country were bound to be difficult. Experts warned for months that even when vaccines arrived, it was just as important to establish a framework to distribute the shots.

Health care workers and nursing home residents have been the first vaccinated, but states are coming under increasing pressure to expand distribution instead of letting vaccines sit in freezers.

“Every vaccine dose that is sitting in a warehouse rather than going into an arm could mean one more life lost,” Health and Human Services Secretary Alex Azar said on Tuesday.

When the vaccine rollout began in mid-December, only a patchwork of states posted updates online, while others relied on news briefings. It took two more weeks for the CDC to release state-level data, which revealed that the country was far behind its vaccine rollout targets.

Data publication, often a dry topic left to policymakers and demographers, has become a powerful tool during the pandemic, informing governors, mayors and public-health officials when it’s safe to resume restaurant dining indoors or reopen schools.

But states like Missouri and Connecticut still haven’t released data updates online. And some of the most populous states are still slow to release data online. California has yet to release daily vaccination data online. The state gave CDC figures showing first doses at about 2,500 per 100,000 people, trailing the national average of 3,600. Those figures may be several days old by now because states have up to 72 hours to report vaccination numbers to the CDC.

Los Angeles County is reporting data though, as is New York City, which published vaccination data online before the state did. And states with smaller populations like Idaho and South Dakota were among the first to publish data online.

According to an NBC News analysis of vaccination data, South Dakota has consistently been within the top three states in administering initial vaccinations since the rollout began, with more than 6,100 shots per capita on Thursday. West Virginia had the most, with around 6,600 per capita.

Kansas, Illinois and Arkansas just launched their data reports this week, one month into the vaccine rollout.

Many state dashboards, like Illinois’, show vaccinations by county but not by race or age. States like Tennessee are reporting race. And while data on county-level doses is helpful, it lacks the precision that can come from smaller geographic areas like ZIP codes. A person’s ZIP code can be used to determine the racial and economic makeup of a neighborhood, without violating their privacy with a full address.

“Most people don’t think about this until times like this, said Koh. “We need the best information possible from a population-based point of view — by community, by neighborhood, by race, ethnicity, and we need that in real time. It’s got to be reliable, and we just don’t have those robust systems right now.”

The CDC’s three-day reporting lag creates discrepancies when compared to the information put out by state health departments. Even when accounting for the delay, some of the vaccination totals put out by the CDC were still off by thousands.

A spokesperson for the CDC said that first-dose numbers were initially off because it included some second-dose numbers, which were said to be fixed in a new release of data on Thursday.

That release was the first time that the CDC released the status of second doses in the country, about 10 days after some states began reporting those numbers.

It’s also the first full picture of how far the country is away from herd immunity. Even so, the CDC has not yet released data on race, age or home locations within states. Without that, it’s hard to tell whether poorer and minority communities and those with limited health care have had equal access to vaccines. The CDC said they will eventually expand the data in the future.

More robust data reporting can help spot such inequalities. Florida is one of the few states that publishes data on residence location. A Wall Street Journal report found that out-of-state residents and foreigners with second homes flocked to Florida once the age eligibility was expanded.

Many state rollout plans were based on addressing vulnerable populations and essential workers, but as some of those plans get adjusted, they may not have time or luxury to get data before doses.

Dr. Peter Hotez, a dean at Baylor College of Medicine who specializes in vaccine delivery, said that under an ideal scenario states would have the capacity to collect timely data about vaccinations broken down by demographics of who’s being vaccinated, such as age and race. But he said he’s not sure that’s realistic without sacrificing delivery speed.

“I think that’s really important and helpful as long as it’s not a barrier to vaccinating,” Hotez said.

“We learned over 2020 that we don’t do well with complicated things,” he said. “We’ve got to make it easy-breezy or else it doesn’t get done.”

After the United States’ handling of the pandemic last year, he said, “we have to do everything possible to make this easy, nonfussy and robust.”

Hotez said he generally believed that the numbers that states are putting out are accurate, though he said some lags are still likely.

“I have no reason to doubt the veracity of the numbers. It’s just that the numbers are crummy,” he said. “These are not Communist Party five-year plans exaggerating the wheat harvest.”

CORRECTION (Jan. 15, 2021, 5:30 p.m. ET): An earlier version of the chart in this article incorrectly stated that Arizona does not have a Covid-19 vaccine data dashboard. The state does have one. The chart has been corrected.