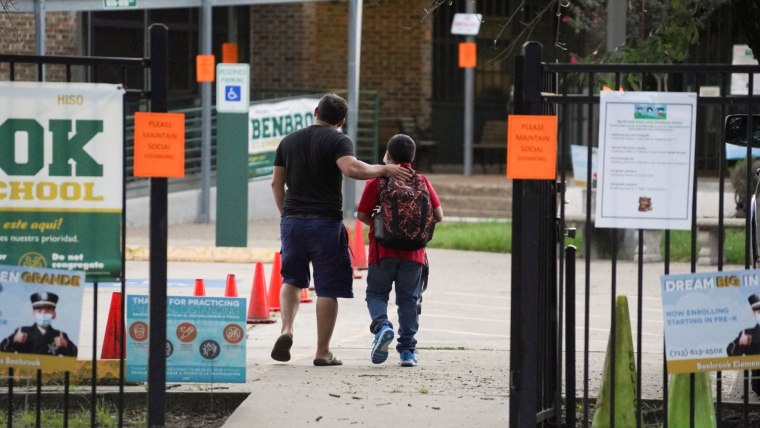 The Department of Education has launched a civil rights investigation into whether states that have banned mask mandates are discriminating against students with disabilities who could be at a higher risk for severe illness from Covid.

The department’s Office for Civil Rights has opened directed investigations in five states — Iowa, Oklahoma, South Carolina, Tennessee and Utah – that have barred schools from requiring masks among students and staff.

“The Department has heard from parents from across the country — particularly parents of students with disabilities and with underlying medical conditions — about how state bans on universal indoor masking are putting their children at risk and preventing them from accessing in-person learning equally,” Education Secretary Miguel Cardona said in a statement. “It’s simply unacceptable that state leaders are putting politics over the health and education of the students they took an oath to serve.”

The state policies conflict with guidance from the Centers for Disease Control and Prevention, which recommends universal mask wearing for students and teachers in the classroom. If the investigations determine that the state mask bans have discriminated against students with disabilities, it could lead to sanctions including a loss of federal education funding.

The Education Department said the Office for Civil Rights has not opened investigations in Florida, Texas, Arkansas, or Arizona because their bans on indoor mask mandates are not currently being enforced. “However, the Department will continue to closely monitor those states and is prepared to take action if state leaders prevent local schools or districts from implementing universal indoor masking in schools or if the current court decisions were to be reversed,” the agency said.

Brian Symmes, communications director for South Carolina Gov. Henry McMaster, called the probe part of the Biden administration’s attempt “to force a radical liberal agenda on states and people who disagree with them.”

“Under South Carolina law, anybody who wants to wear a mask – in a school setting or elsewhere – is free to do so, but the governor isn’t going to ignore a parent’s fundamental right to make health decisions for their children,” Symmes said in a statement to NBC News.

The states that are getting letters are headed by Republican governors, and Iowa Gov. Kim Reynolds accused the administration of trying to “pick a political fight.”

“In Iowa, we will continue to support individual liberty over government mandates,” she said in a statement.

Cardona indicated the move was coming during an interview with said NBC’s “Meet the Press” last week.

“We’re going to use our Office for Civil Rights to investigate any claim that comes forward to make sure that students’ rights are kept. And we’re also going to ensure that the funds are available to those districts that are doing the right thing to make sure students come in safely,” Cardona said, adding that his agency had been in conversations with school districts, like those in Illinois, that are violating governors’ statewide mask mandates.

“We shouldn’t be putting students at risk. So yes, we are involving ourselves in conversations with those leaders, with those elected officials, to make sure that student safety is at the top of the list,” he said.

Cardona’s directive came after President Joe Biden issued a memorandum earlier this month calling on Cardona “to take steps toward the initiation of possible enforcement actions” in order to “prepare for a safe return to school for our Nation’s children.”

“Our priority must be the safety of students, families, educators, and staff in our school communities. Nothing should interfere with this goal,” the memorandum said.

Dareh Gregorian is a politics reporter for NBC News.