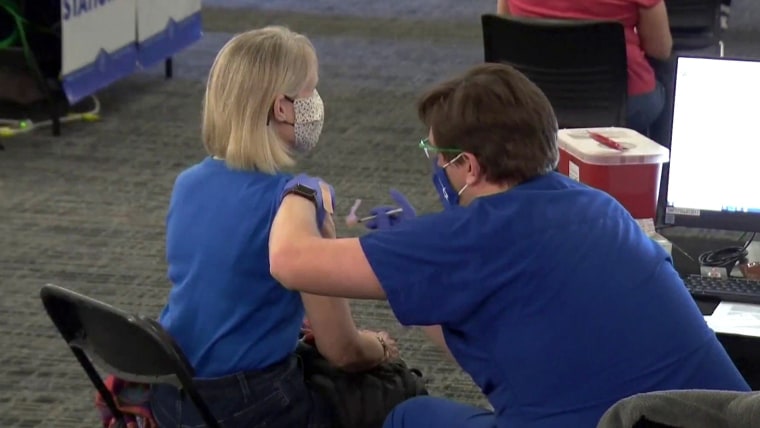 The number of people worldwide who died because of the pandemic in its first two years may total more than 18 million, according to a sobering study released Thursday. That’s three times more than the reported global death toll from Covid-19, which crossed 6 million earlier this week.

The research, published in the peer-reviewed journal The Lancet, analyzed data from 74 countries and 266 states and territories between Jan. 1, 2020, and Dec. 31, 2021. The scientists calculated excess deaths, a measure of how many more people died than would be expected had the pandemic not occurred. That means the estimate accounts both for people killed by Covid directly — confirmed and undiagnosed cases — as well as those whose deaths may be indirectly attributed to the pandemic.

Examples in the latter category include people with serious medical conditions who were unable to seek timely care because hospitals were overburdened, people who died by suicide, and those who died due to a lack of access to essential services.

“The difference between excess mortality and reported COVID-19 deaths might be a function of underdiagnosis due to insufficient testing, reporting challenges, or higher than expected mortality from other diseases,” the study said.

Haidong Wang, an associate professor at the University of Washington’s Institute for Health Metrics and Evaluation and the study’s lead author, said the findings offer a clearer picture of the pandemic’s wrath.

“We know that because of the severity of the pandemic, its impact on mortality is beyond the number of people who died from Covid-19 directly,” he said. “Excess mortality is more accurate in describing the true impact.”

Wang’s team collated mortality data from various global databases and government offices for the two years studied, as well as for up to 11 years prior. The team then used that data to create predictive models for places where no statistics were available. It compared those results to calculations of expected deaths without a pandemic, which it modeled based on historical trends.

In the end, excess deaths were estimated at 18.2 million as of Dec. 31, 2021 — a number that does not include the full effect of the omicron wave. As of that same day, the study says, the world’s official Covid death toll stood at 5.94 million.

Some of that discrepancy, the authors noted, is because reporting systems generally do not list Covid as a person’s cause of death without a positive test result, which means many areas that lack testing capacity tend to underreport.

Dr. Prabhat Jha, director of the Centre for Global Health Research in Toronto, said India in particular has not kept accurate tallies of Covid deaths, part of a “long-standing problem” that preceded the pandemic.

“Culturally, when a death occurs in a rural area, particularly Hindus and smaller Muslim populations dispose of the body quickly by cremating or burying out in a field,” he said. “There is no way the government can keep track … The dead bodies are disposed of by the village in the backyard.”

Jha, who was not involved in the new study, published research in January that focused on Covid’s impact in India. His work suggested that as many as 3.4 million Covid deaths were unaccounted for there during India’s first and second infection waves.

Similarly, the new study showed that India had the world’s highest total of excess deaths: about 4.1 million. The country’s official toll stands at 515,000. Russia and the United States, meanwhile, each had about 1.1 million excess deaths, the report said. Russia has reported nearly 351,000 Covid deaths, while the U.S. has reported more than 968,000. A study in October found that Black, Latino and Native American people in the U.S. disproportionately died of Covid in 2020.

The regions of the world with the most excess deaths, according to the new study, were South Asia, with 5.3 million, followed by North Africa and the Middle East, which each had about 1.7 million. Eastern Europe had 1.4 million excess deaths, the research found.

Wang noted, however, that global lockdowns did reduce deaths from some causes, an effect also reflected in his excess mortality numbers. For example, he said, car fatalities dropped because fewer people were driving, and flu deaths declined with more people staying home.