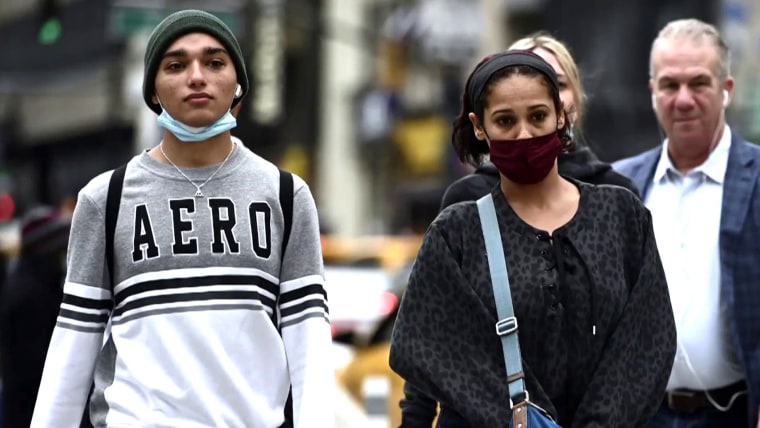 In recent weeks, governors across the United States, officials at the Centers for Disease Control and Prevention and even President Joe Biden have all offered a new, hopeful message about the pandemic: “Covid-19 need no longer control our lives.”

That’s how Biden put it in his State of the Union speech March 1, in front of a nearly maskless House chamber.

“It’s time for Americans to get back to work and fill our great downtowns again. People working from home can feel safe to begin to return to the office,” he said.

The day before Biden’s address, California, Oregon and Washington announced that school mask mandates would lift this Saturday, and many cities, including New York and Minneapolis, have recently ended proof-of-vaccination requirements. Then on Thursday, the CDC released data showing that, according to its new safety criteria — which is based primarily on Covid hospitalization rates and local hospital capacity — more than 90 percent of people in the U.S. no longer need to wear masks.

But for some, the shift has felt quick, given that nearly 1,500 people are still dying of Covid every day.

“Don’t say it’s over,” Jennifer Nuzzo, an epidemiologist at Johns Hopkins University, said of the pandemic. “We say it’s better, much better. Is there still a lot of needless death that’s happening? Absolutely. And I really want us to be laser-focused on making sure everyone who is eligible gets vaccinated and gets the vaccines that they need.”

Nuzzo is one of many public health experts who spent the last two years living with a high degree of caution. She said her family stayed isolated until they were all vaccinated. Now, though, Nuzzo and other experts who once pushed for safety measures like mask mandates and lockdowns are starting to shift their stances — though only slightly.

“At the very start, we were doing absolutely nothing,” Tara Smith, a professor of epidemiology at the Kent State University College of Public Health, said of her family. “Probably the first six months were really locked down.”

Smith, who lives in Ohio, said her family has since taken two trips, one to Florida and another to Michigan, though they drove both times and chose places where they could primarily be outdoors.

But she’s still careful, Smith said, since she and her siblings share caregiving responsibilities for their immunocompromised mother.

“Honestly, we have not lightened up a whole lot since then because we have to take care of my mom. We’re still trying to kind of limit our exposure,” she said.

Justin Lessler, an epidemiologist at the University of North Carolina Gillings School of Global Public Health, said he and his family did not have any guests over until vaccines became available. Lessler also cares for an immunocompromised relative, and he and his wife, a doctor, are often around people for work. So they felt an obligation to shield others from potential exposure, he said.

“I might start dining outdoors soon, but I think I will probably wait a bit before I’m ready to do indoor dining or go face-maskless all the time,” Lessler said. “If we’re going to only interact outside, we don’t ask people to test and wear a mask, but we often have people come over [indoors], and everybody takes a rapid test.”

Nuzzo said she’s encouraged by the CDC’s new way of assessing Covid risk but would caution people not to completely let their guards down yet.

“I’d really like to see that the numbers and all the metrics are continuing to track down,” she said. “And I think we can both kind of celebrate that as well as also just be mindful of the potential for things to change.”

Relative to a month ago, the Covid picture in the U.S. does look rosier. Every state has seen hospitalizations decrease by at least 47 percent, according to NBC News data, and many by as much as 70 percent. Daily deaths have dropped by more than 43 percent in the last four weeks, down from a seven-day average of more than 2,600 per day.

Lessler said he thinks the U.S. is “in a situation where it is starting to make sense to step back some of those mandated measures.” But he also warned, “I wouldn’t throw away your hand sanitizer, your face masks.”

“I’m gonna stay pretty much on the same path I have been for a little bit longer,” he said.