As evidence favoring boosters mounts, half of eligible U.S. residents haven’t gotten theirs 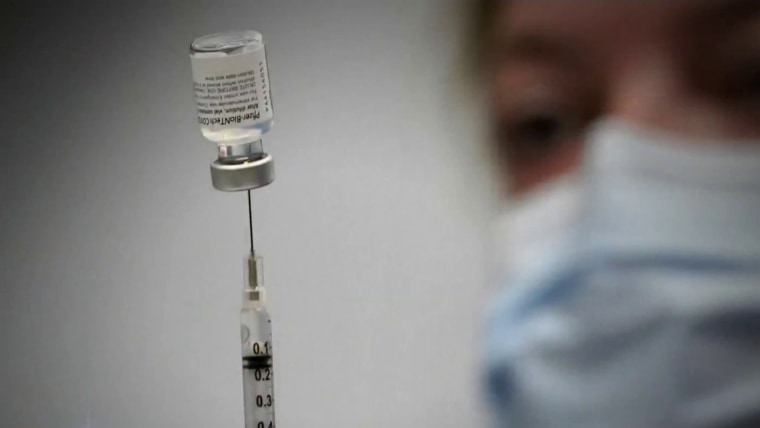 Even as the wealth of evidence in favor of Covid booster shots continues to grow, the share of eligible people in the U.S. who’ve actually gotten them remains stubbornly around 50 percent.

Over the last week alone, several new studies have reinforced that booster shots significantly improve protection against Covid infection, hospitalization and death. The most recent, published Wednesday in the New England Journal of Medicine, came from Pfizer’s ongoing vaccine trial. Researchers compared infection rates between participants who got just the initial two shots followed by a placebo and those who got a third dose and found that the booster’s efficacy was 95 percent.

“We’ve got to do better when it comes to boosters, and we’re trying everything we can to get the message out of why it is so important,” Dr. Anthony Fauci, the government’s top infectious disease expert, said at a White House briefing Wednesday. “Because when you look at the data of what boosters do, particularly in the era of omicron, boosters are extremely important.”

The stagnation in boosters is likely due to a combination of factors, said Dr. Rachael Lee, a health care epidemiologist at the University of Alabama at Birmingham. That includes the absence of employer mandates and fears about rare reactions like myocarditis. Some people may also be holding out, she said, “waiting to see if companies will create a booster vaccine targeting variants such as BA.2.”

Public messaging, too, has played a role, said the founder of Just Equity for Health, Dr. Stella Safo, an HIV primary care physician at Mount Sinai Health System in New York. Many people most likely feel a lack of urgency and reduced fear of the disease as case numbers decrease, she said.

“We’ve lost it when it comes to messaging,” Safo said. “So now it’s every person for themselves, and people who got vaccinated twice who weren’t dying to get the third vaccine feel like either I’ve had Covid or I’m not hearing a mandate to move for getting the third vaccine, and so why bother?”

The reason to bother, however, is clear in several recent studies.

A Centers for Disease Control and Prevention report released Friday showed that from Dec. 19 through Jan. 31 — when the omicron variant of the coronavirus was dominant — the hospitalization rate among adults who got vaccinated but not boosted was three times that of those who got boosters. A second CDC study released the same day showed that two doses of the Pfizer or Moderna vaccine were 79 percent effective at preventing mechanical ventilation and death during the omicron wave, whereas three doses were 94 percent effective.

Even boosted people who have wound up in the hospital with Covid still have lower mortality, according to a study published Thursday in The Lancet Regional Health.

The researchers looked at more than 7,700 patients hospitalized with Covid in Michigan from August to January. Of those who’d gotten boosters, 7 percent died. But 10 percent of vaccinated, unboosted people died, and nearly 13 percent of unvaccinated people died. That was true even though the boosted group was older and had more underlying health risks.

“When you look at these stats in aggregate, I think it tells a compelling story, and that story is that even if you were older or you had higher degree of comorbidities — so baseline risk was higher, you’re a sicker individual — you still had an added mortality benefit by getting boosted,” said a co-author of the study, Dr. Amit Bahl, an emergency medicine doctor at Beaumont Hospital in Michigan.  The CDC recommends that all Pfizer recipients over 12 years old get boosters at least five months after their second shots and that Moderna recipients over 18 do the same. Adults who got Johnson & Johnson shots should get second shots after at least two months.

Fauci said Wednesday, however, that while public health officials’ efforts to ensure equity in the original vaccine rollout proved relatively successful, boosters “are not as much being implemented among minorities.”

Safo said it’s possible that some people who might otherwise have gotten boosters are now relying on infections from the recent omicron surge to boost their protection, instead.

“If you think about what we’re facing, which is further variants of Covid, you want to have the best immunity, and the best immunity does come from getting a booster,” she said. “So yes, if you’ve had omicron, you had two vaccines, you have some immunity, but it isn’t as good as immunity you would get from getting your booster vaccines. And that message isn’t getting across to people.”

Bahl, however, said he’s hopeful that new, real-world data like his study might convince people who are on the fence.

“For those individuals, I think you really have to prove the value of that booster dose for them to take that next step, because people are already reluctant to have this vaccination that’s new on the market,” he said.

Lee, too, said she thinks there are still ways to encourage more boosting.

“If we focus more about the positive effects, more patients may consider receiving a third shot,” she said.