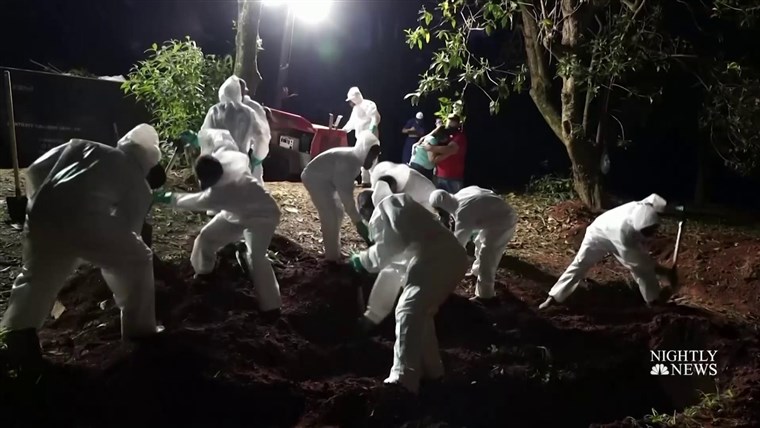 Brazil is bearing the brunt of an alarming surge in Covid-19 cases, with fatalities reaching more than 4,000 in a single day on Tuesday and hospitals stretched to breaking point.

As the United States ploughs ahead with vaccinations and public debates continue on reopening the economy with possible ‘vaccine passports,’ Brazil’s plight is a reminder that much of the rest of the world is still in the grip of the pandemic.

“It’s a nuclear reactor that has set off a chain reaction and is out of control. It’s a biological Fukushima,” Miguel Nicolelis, a Brazilian doctor and professor at Duke University, told Reuters.

The country is battling a highly-contagious local variant amid meager social distancing efforts and a national shortage of hospital beds, according to health experts. Many lay blame with right-wing populist President Jair Bolsonaro who has repeatedly denied the benefit of wearing masks and questioned the efficacy of vaccines, contradicting global health advice.

Brazil has also been through four health ministers since the pandemic began, slowing planning efforts, with some Brazilians travelling to countries such as Uruguay to get vaccinated. Authorities in Sao Paulo, Brazil’s biggest city, have emptied old graves to make room amid soaring death tolls.

Despite the recent surge, Brazilian officials are insistent the country can soon return to something resembling business as usual.

“We think that probably two, three months from now Brazil could be back to business,” Economy Minister Paulo Guedes said during an online event on Tuesday. Meanwhile, leading economists urged the government in an open letter to speed up vaccinations and prepare for emergency lockdowns, contradicting Bolsonaro’s assertions that such closures could impose too much financial hardship.

The surge in deaths across the globe serve as a grim reminder that despite successful vaccination roll-outs in the U.S., U.K. and other countries, the global pandemic can’t be suppressed while the virus still lingers and mutations evolve.

“No single government or multilateral agency can address this threat alone,” the World Health Organization said in a statement last week. “The Covid-19 pandemic has been a stark and painful reminder that nobody is safe until everyone is safe.”

Rowland Kao, a professor of veterinary epidemiology and data science at the University of Edinburgh, said that although vaccines and social restrictions were working, “we’re definitely not on top of this, speaking globally,” he said.

“The worst thing you can have is substantial numbers of vaccinated people at the same time as substantial numbers of unvaccinated people with a circulating disease,” he told NBC News. A scenario that increases the chances of transmission and the spread of mutated variants that are “vaccine-evading,” he said, while jeopardizing global travel and trade.

Kao said it would require a “balancing act” for countries to get moving again. “It’s going to be a game of can you keep it out long enough to develop boosters towards variants,” he added. “All it takes is one person to cross a border.”

Elsewhere the pandemic continues to grow.

India reported a record 115,736 new cases on Wednesday, a 13-fold increase in just over two months with pressure growing on the government to expand its vaccination campaign.

As a second wave gathers momentum, the federal government has asked states to decide on local curbs to control the spread of the virus, but has so far refused to impose any national lockdown after the last one in 2020 devastated its economy.

“The pandemic isn’t over and there is no scope for complacency,” Health Minister Harsh Vardhan tweeted, urging people to get “vaccinated on your turn and follow Covid-appropriate behavior scrupulously!”

Elsewhere in Asia, South Korea on Wednesday reported its highest single-day number of new cases in three months, amid a rise in infections in kindergartens, saunas, bars and churches, mostly in greater Seoul. The Korea Disease Control and Prevention Agency reported 668 new cases for Tuesday, the highest level since Jan. 8.

While in Japan, where the Olympics are due to begin in just over 100 days, the western region of Osaka on Wednesday canceled scheduled Olympic torch events and declared a state of medical emergency, as cases skyrocketed.

“It is almost certain that this mutant strain is highly contagious with a high transmission speed,” Osaka governor Hirofumi Yoshimura said in televised remarks. “The medical system is in a very tight situation.”