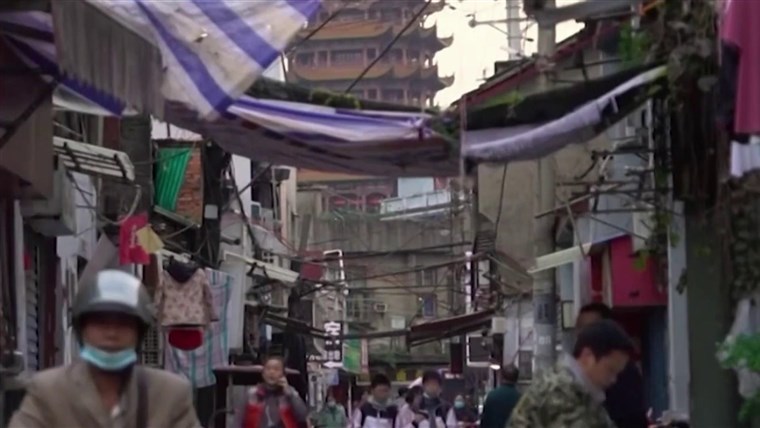 BEIJING — It took just 39 new coronavirus cases for health authorities in China to put almost 11 million people into lockdown in the city of Shijiazhuang.

Health officials took no chances on Wednesday, sealing off the capital of the industrial Hebei province and ordering a mass testing drive.

Travel restrictions were put in place in the remainder of the region, which encircles China’s capital Beijing and is home to some 76 million people.

By Saturday, Mayor Ma Yujun told a news conference that it had taken just three days to complete the first round of mass testing in Shijiazhuang, with 354 people found positive for the virus. A second round of testing is due to begin soon, he added.

Yan Xixin, a critical care director at the Second Hospital of Hebei Medical University, told the same news conference, “the risk of having more infections is still there.”

This hard-and-fast approach is being echoed elsewhere in the Asia-Pacific region to fend off coronavirus flare-ups — including in Japan, Thailand and Australia — making measures to curb the virus spread in Europe and the United States appear almost sluggish.

Authorities put Hebei — known for textile, steel and pharmaceutical industries — into a “wartime mode” on Tuesday. This meant that government-coordinated action could begin, investigation teams to trace contacts could be set up and medical supplies distributed.

For residents of the provincial capital, Shijiazhuang, travel out of the city was barred and gatherings banned. Schools were closed down, while flights and trains were cancelled and the main bus terminal shut.

Late Friday, citizens were urged to stay home for at least seven days.

Nearby, officials in the city of Nangong announced on the social platform WeChat that they would offer rewards of 500 Yuan ($77) for reports of anyone refusing a Covid-19 test.

“People should fully understand the necessity of this approach,” Shi Mo, a graduate student in Shijiazhuang, told NBC News.

Although it would take some social and psychological adjustments, Shi likened the lockdown to preparing “for a protracted war.”

“With the valuable experience of Wuhan in its previous epidemic prevention, Shijiazhuang has a model for reference,” he said. “We are all optimistic about the epidemic.”

The aggressive measures to control the outbreak are similar, although not yet as draconian, as those used by Chinese authorities to stamp out the virus when it first emerged in the city of Wuhan in late 2019.

Since then, the total number of coronavirus cases in China stands over 87,000 and the death toll remains unchanged since May, at 4,634 people, according to China’s National Health Commission — the only official source of information about infection rates in the country.

NBC News could not independently verify the reported numbers, and the Chinese government has been criticized for its lack of openness and minimizing the severity of the outbreak since its outset. The country has also been accused of mishandling the initial phase of the outbreak and silencing whistleblowers.

A vaccination program is underway in Hebei, however, and the National Health Commission has said vaccines would be provided free of charge once they become available to the general public.

Sun Xinyi, a teacher in Shijiazhuang, said the sudden lockdown in the city initially “made people kind of panicky,” but the quick release of government information had reassured many.

Although slightly disgruntled by being unable to order food deliveries, which have been suspended, Sun said the “strict and rapid citywide testing is in fact a good thing.”

Similar tough approaches are being carried out in other countries.

In the 2 million-strong Australian city of Brisbane, the city entered a three-day lockdown Friday night after a single case of the more contagious coronavirus variant that emerged in Britain was identified.

“We are going to go hard and we are going to go early, to do everything we can to stop the spread of this virus,” Queensland state Premier Annastacia Palaszczuk said at a press conference Friday.

Japan also declared a monthlong, limited state of emergency in the capital, Tokyo, and three neighboring prefectures on Thursday, to stem the virus spread.

Residents have been asked to stay home after 8 p.m. as Prime Minister Yoshihide Suga conceded the measures may need to be extended to other parts of the country.

The tough curbs come despite Japan being less seriously hit by the pandemic than many other countries, recording around 3,900 deaths, according to health ministry data.

Thailand also declared 28 provinces, including Bangkok, as high-risk zones and asked people to work from home and avoid gathering, as authorities confirmed a daily record of 745 new infections on Monday.

The country has reported just 67 deaths overall, according to its Department of Disease Control, among the lowest in Asia.

Dawn Liu reported from Beijing and Adela Suliman from London.

Dawn Liu is a researcher for NBC News based in Beijing.