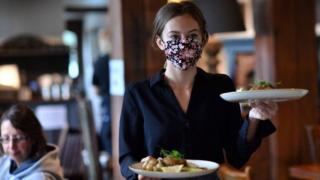 The UK government borrowed £35.9bn in August as tackling the economic fallout of pandemic took its toll on the public finances, official figures show.

The figure – the difference between spending and tax income – was £30.5bn more than it borrowed in August last year.

The increase meant that the borrowing figure hit its highest amount for August since records began in 1993.

Borrowing between April and August totalled £173.7bn – also a record.

August’s monthly borrowing figure was, however, less than economists had predicted at £38bn, according to Pantheon Macroeconomics.

The Office for National Statistics (ONS) also revised down its estimate for UK borrowing in July, by more than £11bn, to £15.4bn, demonstrating how difficult tracking the economy during the pandemic can be.

It also said that total UK debt passed £2 trillion for the first time in history in August, rather than in July as previously thought.

That figure now exceeds the size of the UK economy, the highest level of debt seen since the 1960s.

Andrew Wishart, UK economist at Capital Economics, said that rising borrowing figures were down to the government absorbing “much of the cost of the Covid-19 crisis”.

The government has been forced to cover a wide range coronavirus-related costs – from the furlough scheme and bailouts for rail firms to business rates holidays and VAT cuts for hospitality and tourism.

It has also set aside £500m to cover the cost of the “Eat Out to Help Out” scheme, where diners got a state-backed 50% discount on meals and soft drinks up to £10 each on Mondays, Tuesdays and Wednesdays in August.

But “the big picture is that fiscal support will fade over the autumn causing many more job losses to be realised”, Mr Wishart added.

The latest figures from the ONS show that while billions have been pumped into propping up the economy, tax receipts have dropped sharply.

The amount collected by central government in taxes dropped to £37.3bn in August, which is £7.5bn less than a year before.

The new figures came the day after Chancellor Rishi Sunak announced a series of extensions to existing coronavirus programmes, including a replacement for the furlough scheme, which is due to finish at the end of October.

Under the new wage “top-up” scheme, if bosses bring back workers part-time, the government will help top up their wages to at least three-quarters of their full-time pay.

Philip Shaw, chief economist at Investec Bank, said that the government’s borrowing figures may “partly correct themselves” next year as a number of the chancellor’s measures expire.

Mr Shaw pointed out though that in order to bring down debt, the chancellor “will have difficult decisions to make on fiscal policy”.

But “with the focus currently on trying to maintain the recovery, this is not the time,” he added.

Looking ahead, the ONS said that the chancellor was likely to borrow about £370bn in the 2020 financial year.