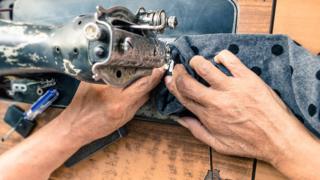 The retail industry has accused the government of failing to act on the exploitation of UK garment workers.

In a second letter to Home Secretary Priti Patel, the British Retail Consortium (BRC) said there has been no “significant action… to bring this injustice to an end”.

The BRC, which signed the letter with MPs, estimates workers have lost £27m in unpaid earnings since July.

The Home Office said it was working to stamp out exploitation and abuse.

In July, companies including Marks & Spencer, Next and Asos – along with investors, MPs and human rights groups – called on the government to implement a scheme to ensure textile workers were paid a legal minimum wage.

The group’s letter to Ms Patel said: “We are writing as a broad coalition of parliamentarians, businesses, investors and civil society organisations about our concerns regarding the unethical labour practices taking place in garment factories across the UK.

“We request that urgent action is taken by the government to implement a ‘fit to trade’ licensing scheme that ensures all garment factories are meeting their legal obligations to their employees.”

That letter followed revelations about conditions in textile factories in Leicester that prompted fashion group Boohoo to launch an urgent review into its suppliers.

A Sunday Times investigation about conditions in Leicester factories found that some staff were paid below the legal minimum and worked without coronavirus safety measures in place.

But in the second letter to the home secretary, disclosed on Sunday, the BRC and Dr Lisa Cameron MP, chair of the All-Party Parliamentary Group for Textiles & Fashion, said there had been little response.

Helen Dickinson, chief executive of the BRC, said: “Despite numerous reports in the media, and a previous letter to the home secretary signed by over 50 MPs and peers and more than 40 retailers, investors and NGOs, we have not seen any significant action from government to bring this injustice to an end.

“All the while garment workers are robbed of tens of millions of pounds in wages.”

The BRC said that although it had discussed the plight of garment workers with officials since July, it had not received an official response to its first letter.

The MPs’ group has estimated that more than 10,000 garment factory workers are being paid an average of £3.50 an hour – well below the National Minimum Wage of £8.72.

Dr Cameron said: “It is vital the home secretary takes action to introduce a licensing scheme for UK garment manufacturers and puts the rights of workers at the heart of the industry.”

But the Home Office said it was wrong to suggest nothing was being done, adding that bad employers were being targeted by the authorities to ensure they complied with the law.

In a statement to the BBC, the Home Office said: “Exploiting vulnerable workers for commercial gain is despicable and we expect businesses to do all they can to tackle abuse and exploitation in their supply chains.

“We are deeply concerned by the appalling reports of illegal and unsafe working conditions for garment workers in Leicester, and will ensure perpetrators face the full force of the law if evidence comes to light through the work of our new specialist Taskforce, led by the Gangmasters and Labour Abuse Authority.”