Rail nationalisations may be coming down the track

Home Business Rail nationalisations may be coming down the track 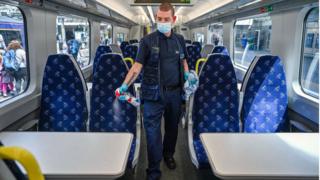 Some UK railway franchises could be nationalised when emergency deals set up during the coronavirus pandemic expire on Sunday.

Insiders said talks between the government and train firms on new deals were going “right to the wire”.

The government has pumped billions of pounds into the railways to cover the fall in ticket revenue from low passenger numbers during the pandemic.

But sources said some contracts could be handed back to the government.

Many private operators are expected to remain in place under similar emergency arrangements, but some may decide to opt out.

The Department for Transport said discussions were “ongoing” and it wouldn’t comment on commercially-sensitive negotiations.

In the House of Commons on Thursday Labour’s Jim McMahon said it was “absolutely staggering” that Transport Secretary Grant Shapps did not have an update on the situation at such a late stage.

A deadline of this Sunday has been in place since March when the current emergency contracts were signed.

Mr Shapps said it was right that the negotiations with nine different companies were not done “in public”.

Securing new agreements, even ones which will probably only cover the short-term control and finances of the railways, is complicated by two main factors.

The first is that no-one can say when passenger numbers on the railways will return to pre-pandemic levels.

The second is the fact that certain train companies were losing money before the pandemic.

In fact, at the beginning of the year ministers were poised to announce an overhaul of Britain’s railways.

Reliability on certain networks had been poor and some train companies were losing money.

The government took control of the operator Northern in January. South Western Railway was heading in a similar direction.

But when the pandemic hit, the contracts between the Department for Transport and private companies were suspended, not scrapped.

It means some financial obligations from that period remain.

That backdrop and the uncertainty about future passenger numbers, and therefore the commercial viability of the railways in the longer-term, means certain rail operators might be tempted to opt out.

Even if all of the train operators sign-up to a series of new emergency contracts by Sunday, a longer-term deal still needs to be worked-out.

The Department for Transport is said to favour a shift towards a “concessionary model” for the railways, which is already in operation on Merseyrail and the London Overground.

It means private companies run services for a fixed fee and any loss or profit falls to the government in charge.

This system, which shifts risk away from private firms, is said to be favoured by train companies operating large, complicated commuter networks.

Operators in charge of intercity networks want to maintain some of the commercial flexibility that they had in the past, over things such as pricing.

However solving the longer-term conundrum is made harder by the resurgence of the virus and the uncertainty that adds over passenger numbers.

For now, government guidelines over social-distancing are supposed to limit passenger numbers on trains to around 40% to 50%.