Coronavirus: ‘I took a £1,000 flight to beat Portugal quarantine’ 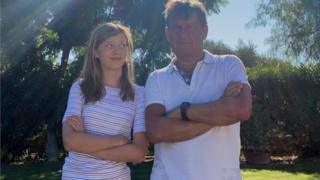 John Cushing is cutting his Portugal holiday short to make sure his daughter gets home to the UK before being hit by expected new quarantine restrictions.

But he had to stump up £1,000 for flights home on Thursday, which is three times as expensive as the return flights he had already paid for.

“I never thought they would re-impose quarantine after giving Portugal the all-clear,” John told the BBC. “The airlines have us over a barrel and don’t seem to have any sympathy.”

He’s one of the many holidaymakers scrambling to get out of Portugal amid reports it is about to be taken off the government’s safe travel list.

Many have been hit with surging flight prices, but feel they have no choice but to pay as they cannot afford to isolate for 14 days on their return.

John said: “We’d been waiting six months to visit our villa in the Algarve, and as soon as the government said it was OK to travel, we booked our flights.”

The single dad from Bristol paid £320 for return flights from Bristol for himself and 12-year-old daughter Georgie, arriving last week.

Once he heard rumours of the new travel restrictions he felt he had no choice but to spend £1,000 to get home before the potential deadline.

He said: “My daughter was in tears yesterday at the thought of not being able to go back to school and see her friends.

“She has already missed most of year seven [at school] and I can’t let her miss the first two weeks of year eight.”

Despite having booked on flights returning to Bristol for this coming Saturday, he said he didn’t want to risk being forced to self-isolate.

But there were no earlier flights available to Bristol, so he had to buy Easyjet flights to Gatwick at just over £1,000.

Easyjet denied that it was taking advantage of worried holidaymakers.

“As with all airlines, our pricing is demand-led, which means that as more seats are booked on a flight the price will rise, so our fares start low and increase the closer it is to the date of departure,” the airline told the BBC.

“The fare highlighted is the direct result of high demand for flights. We do not artificially increase ticket prices.”

Many other holidaymakers have contacted the BBC with similar stories.

Jodie Hudson-Cox, from Essex, was originally going to fly back to Southend from the Algarve on Saturday, but has also changed her plans.

“I re-booked early this week for flights coming back into East Midlands airport on Friday. We booked the flights so we weren’t sat here worrying about it all week,” she told the BBC.

Londoner Wayne Scott is due to fly to Portugal for work in two weeks.

“I´m a street entertainer and the summers are prime time for getting work and travelling to different countries and festivals around the world to make my living, so this rare chance of work is very important,” he said.

But he is already currently in quarantine after returning from working in Spain.

“I can´t risk another two weeks of quarantine,” he told the BBC. “The government must give us more warning so that we can make other plans.”

Meanwhile, Neil Millington, of south London, is currently on the Portuguese island of Madeira, which is more than 1,000km away from the Portuguese mainland.

He reckons it would be ridiculous for the island to face travel restrictions.

“Madeira has only had 157 cases altogether and they have a fantastic system here for Covid-testing,” he said.

“There are an awful lot of English people here and there will be a mad stampede to get a flight back if restrictions are announced.”