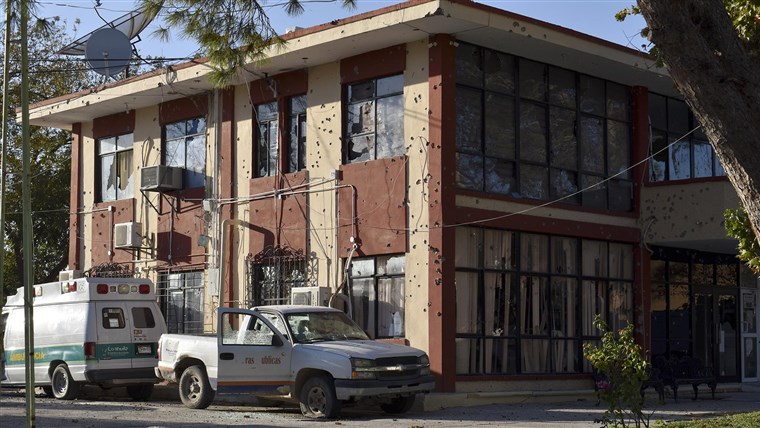 Mexico’s former defense secretary is facing charges of using his position to help one of the most notorious drug cartels operate with impunity while using the Mexican military to hurt their rivals, according to U.S. prosecutors.

Federal prosecutors in Brooklyn, New York, have charged Salvador Cienfuegos Zepeda, 72, with accepting bribes from the H-2 cartel based in Nayarit and Sinaloa, Mexico, in exchange for his services.

Cienfuegos, who served as defense secretary under then-President Enrique Peña Nieto from 2012 to 2018, was taken into custody Thursday at Los Angeles International Airport.

The H-2 cartel is described by prosecutors as having distributed thousands of pounds of heroin, cocaine, methamphetamines and marijuana.

“In Mexico, the H-2 Cartel trafficked in hundreds of lethal firearms and committed countless acts of horrific violence, including torture and murder, in order to protect against challenges from rival drug trafficking organizations, fight for territory and silence those who would cooperate with law enforcement,” stated prosecutors.

If Cienfuegos is convicted of the four counts of laundering drugs and money, he could face life in prison.

Cienfuego’s detention memo says he helped make sure that military operations weren’t conducted against the H-2 cartel, that he initiated military operations against rival drug cartels and helped locate maritime transportation for H-2’s drugs, and acted to expand H-2’s territory to Mazatlán and later the rest of Sinaloa.

Cienfuegos also introduced the cartel’s senior leadership to other corrupt Mexican officials who allegedly took bribes and warned H-2 about U.S. law enforcement investigations, including the use of witnesses and informants. One supposed informant was killed because H-2 believed he was working with U.S. law enforcement, even though prosecutors say he wasn’t.

Prosecutors say they intercepted thousands of Blackberry messenges between Cienfuegos and H-2 leadership detailing the relationship.

‘Decomposition of the government’

Mexico’s president on Friday criticized previous administrations as corrupt after the arrest.

“This is an unmistakable example of the decomposition of the government, of how civil service was degrading,” President Andrés Manuel López Obrador said, according to The Associated Press.

López Obrador said he only learned about Cienfuegos’ arrest afterward and incorporated the incident into his narrative that his predecessors had presided over a steady increase in corruption.

“We won’t cover up for anybody,” López Obrador said at a daily news briefing, before voicing support for Cienfuegos’ successor at the head of the Army and his counterpart in the Navy, two of the most powerful anchors of national security in Mexico.

“If we’re not talking about a narco state, one can certainly talk about a narco government, and without doubt, about a government of mafiosi,” López Obrador said. “We’re cleaning up, purifying public life.”

Peña Nieto was in office for six years, through December 2018. Several members of his cabinet and party have been implicated in high-level corruption cases, sometimes involving allegations of links to organized crime.

Under Cienfuegos, the army was accused of extrajudicial killings and human rights abuses, including the 2014 Tlatlaya massacre, where 22 drug gang members were executed.

The armed forces have taken an increasingly prominent role in fighting crime in Mexico, and have been viewed by some as less prone to corruption than police forces.

The detention of Cienfuegos comes on the heels of the arrest of ex-President Felipe Calderón’s security minister, Genaro Garcia Luna, in Texas in 2019.

Luna is on trial in New York on suspicion of accepting millions of dollars in bribes from Joaquin “El Chapo” Guzman’s Sinaloa cartel, which he was tasked with combating.

Elements of the army in the northern state of Sinaloa have long been rumored to have links to the cartel formerly headed by the crime kingpin Guzmán, who controlled much of the illegal drug trade across the Western Hemisphere for almost three decades.

Guzmán is now in a U.S. jail after being sentenced to life plus 30 years in July.

The U.S. and Mexican governments portrayed Guzmán’s arrest and conviction as a major victory but analysts say his Sinaloa cartel has continued to hum along without him in its reign of terror from its base in Culiacán.

The high-level arrest of Cienfuegos comes less than three weeks before the U.S. presidential election.

President Donald Trump, seeking a second term, made clamping down on cartel activity a major policy objective when he took office in 2017.

The war against the cartels has taken a heavy toll on the Mexican people. There have been 150,000 killings related to organized crime in Mexico since 2006, according to a Congressional Research report published this year. Some 73,000 people were also reported missing from 2007 to mid-2020, according to the government of President Andrés Manuel López Obrador.

A federal grand jury returned the indictment against Cienfuegos in August of 2019.

Andrew Blankstein is an investigative reporter for NBC News. He covers the Western United States, specializing in crime, courts and homeland security.

Adela Suliman is a London-based writer and reporter for NBC News Digital focusing on international news, in particular China. She has reported from the Middle East, Europe and Asia.