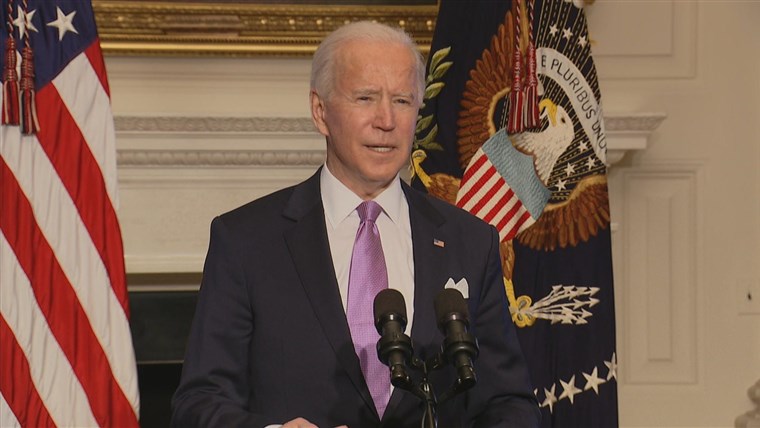 LONDON — The tens of thousands of protesters who flooded Russia’s streets over the weekend not only piled pressure on Vladimir Putin, but they also put another president on the spot: Joe Biden.

Biden’s new foreign policy team is grappling with a myriad of domestic as well as foreign challenges — not the least of which is what to do about the strongman in the Kremlin.

At first blush, it appears that the new team at the top of the State Department is putting its rhetorical foot down about the demonstrations, which follow opposition leader Alexei Navalny‘s poisoning with the nerve agent Novichok in August and his defiant return to Russia this month. Hours after the first arrests on Russian streets Saturday, U.S. officials said Washington condemned the “harsh tactics against protesters and journalists.”

Biden spoke to Putin on Tuesday for the first time as president and raised concerns about the Kremlin’s treatment of Navalny, according to the White House, as well as other issues.

“President Biden made clear that the United States will act firmly in defense of its national interests in response to actions by Russia that harm us or our allies,” the White House said.

The Kremlin’s read-out of the leaders’ call did not mention Navalny.

Russian authorities not only arrested Navalny on his return to the country from Germany, where he was evacuated for treatment after his poisoning; they also detained more than 3,700 protesters and members of the media who took to the streets Saturday during the biggest show of discontent the country has seen in years.

“The swift reaction by the State Department was registered here as a sign that the Biden administration will actively interfere in Russian politics,” Dmitri Trenin, director of the Carnegie Moscow Center, said Monday.

The Kremlin “is bracing for that,” he said.

On Saturday, tens of thousands of people across Russia braved freezing temperatures, the Covid-19 pandemic and multiple warnings from authorities to show support for Navalny, who has long been the Kremlin’s loudest critic, and to protest corruption among the ruling elites, including Putin himself.

A few days before, Navalny’s team had released the report of an investigation, which has now been viewed more than 91 million times, that alleged to show kickback schemes involving Putin. On Monday, Putin denied the claims.

Asked whether he is considering sanctions against people involved in Navalny’s poisoning and arrest, Biden told reporters Monday that Washington and Moscow can cooperate in areas of mutual self-interest but that his administration can also “make it clear to Russia that we are very concerned about their behavior” — whether it concerns Navalny or any other points of tension.

Putin is bracing for Biden’s team to be more assertive about Russia than its predecessors, including in its support for Navalny, said Mark Galeotti, a professor at the University College London School of Slavonic and East European Studies and a senior associate fellow at the Royal United Services Institute, a London think tank.

The Kremlin’s efforts are “why we have seen a particularly quick and, frankly, toxic propaganda campaign being launched to precisely present Navalny as a bought-and-paid-for agent of the CIA,” Galeotti said. “They are trying to pre-position themselves, so then they can say, ‘Aha, you see, we told you that’s what’s going on — the State Department is coming in to support its allies.'”

With Navalny in detention and facing years in jail in an old criminal case that has been revived against him, his supporters have vowed to take to the streets again this weekend to keep pressure on the government to release him.

But Putin is used to pushing right back, Trenin said.

“He never does what others are seeking to get from him under pressure — in this case, freeing Navalny,” he said.

The Biden administration will have to come up with more than just statements of condemnation, Galeotti said, or “the Kremlin will rightly regard that as a mark of impotence rather than interest.”

While the Biden administration is likely to invoke new sanctions against Russia, they won’t be enough, he said.

“The lesson of the last six years is that sanctions do not, on the whole, shift the government that’s willing to outlast them,” he said.

Russia has been sanctioned by the U.S. on numerous occasions, including over allegations that it meddled in the 2016 U.S. election and because of its annexation of Crimea, with limited success in curbing Moscow’s ambitions.

“I think there is political will in the Biden administration, but I am not sure if there is much political imagination,” Galeotti said, adding that Biden will have to look for new ways to apply pressure and catch the Kremlin by surprise.

“The Kremlin is always the most unhappy when it has not been able to predict the outcome,” he said. “So it will be about trying new ways, because the old ways are not working.”