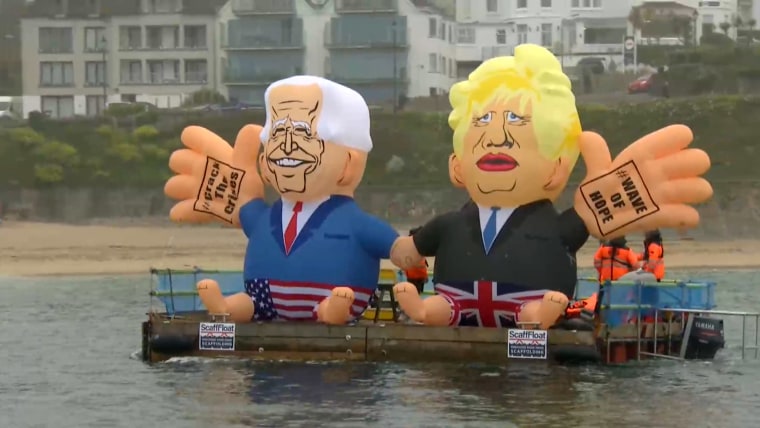 LONDON — As President Joe Biden seeks to unite Western democracies to counter China’s increasing global influence at the Group of Seven meeting of world leaders on Saturday, one issue is threatening to divide his European counterparts: Brexit.

Although Britain’s decision to leave the European Union is not officially on the G-7 agenda at the two-day gathering by the sea in Cornwall, England, a diplomatic feud over Northern Ireland, the only part of the U.K. that borders the 27-nation bloc, continued to escalate.

Afterward, he accused the European bloc of not taking a “sensible or pragmatic” approach to post-Brexit arrangements and threatened to use an emergency clause to suspend agreed-upon rules if the bloc did not compromise.

The E.U. is angry at a British delay in implementing new checks on goods coming into Northern Ireland from the rest of the U.K., while Britain says those checks are imposing a big burden on businesses and destabilizing Northern Ireland’s hard-won peace.

Ahead of the president’s arrival to England earlier this week, some British newspapers were filled with outrage at the perception that Biden, who has Irish ancestry and has been critical of Brexit in the past, was unsupportive of the U.K. government’s stance.

However, Johnson brushed away such rumors when the two men first met on Thursday, telling media that they were in “complete harmony” over the issues.

“The Good Friday Agreement & peace on the island of Ireland are paramount,” European Commission President Ursula von der Leyen tweeted after meeting Johnson at the G-7 on Saturday. “We want the best possible relations with the UK. Both sides must implement what we agreed on. There is complete EU unity on this.”

The E.U. is threatening legal action if the U.K. does not fully bring in the checks as part of the protocol next month, which include a ban on chilled meats such as sausages from England going into Northern Ireland — an issue British tabloids have irreverently dubbed the “sausage wars.”

“The Prime Minister made it clear that the U.K. is committed to finding practical solutions within the framework of the Protocol which protect the aims of the Belfast (Good Friday) Agreement and minimize the impact on the day-to-day lives of people in Northern Ireland,” a Downing Street spokesperson said in a statement on Saturday.

It added that the leaders “agreed on the need for continued meaningful engagement to resolve the outstanding issues” and that the matter had been raised in meetings Johnson held with Macron and Merkel, too.

Biden met France’s Macron later on Saturday. He said on Twitter that the two men stood “ready to take on the toughest challenges.”

The issue looks unlikely to be resolved before the G-7 seaside summit concludes on Sunday and shows that Brexit remains an underlying fracture among European allies, even as Biden hopes to strengthen cooperation over China.

Biden has made it a priority to use his first foreign trip as president to showcase the ability of democratic institutions to respond to shared challenges and warned about the global rise of authoritarianism.