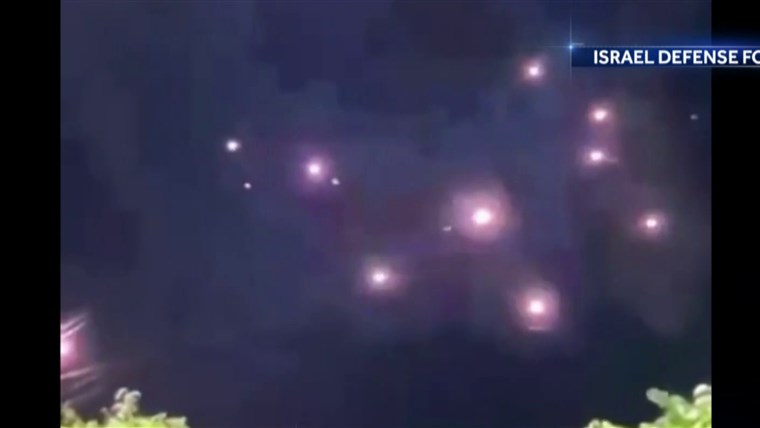 TEL AVIV — In the worst flare-up of violence in seven years, Israel launched airstrikes and Palestinian militants launched hundreds of missiles overnight into Wednesday, killing more than 50 people and injuring hundreds more amid rising fears the conflict could spiral into all-out war.

What started as a week of tense clashes in Jerusalem has escalated into violent unrest on the streets of Arab Israeli towns, as well as a deadly aerial conflict — more than 1,000 rockets lit up the skies of Israeli cities, while at least two high-rise buildings were leveled in the Israeli bombardment of the blockaded and impoverished Gaza Strip, home to 2 million Palestinians.

At least 53 people, including 14 children, were killed in the Israeli bombardment, according to the Gaza Health Ministry.

Five Israelis were killed in the coastal cities of Ashkleon and Rishon Lezion, and in the city of Lod southeast of Tel Aviv, officials said. In total, more than 200 people have been wounded in Israel, while there have been more than 300 Palestinians injured, according to authorities on both sides.

It is the most intense exchange of fire since the 2014 war in Gaza. Both sides appear to be preparing for more violence.

Stop the fire immediately. We’re escalating towards a full scale war. Leaders on all sides have to take the responsibility of deescalation. The cost of war in Gaza is devastating & is being paid by ordinary people. UN is working w/ all sides to restore calm. Stop the violence now

U.S. State Department spokesman Ned Price told a briefing Tuesday, “Israel has the right to defend itself” and “the Palestinian people also have the right to safety and security, just as Israelis do.”

The United States is speaking with both sides “to urge calm, de-escalation and restraint on both sides,” he said.

Palestinian President Mahmoud Abbas received a letter from President Joe Biden on Tuesday regarding the conflict, according to the official Palestinian news agency WAFA.

“Israeli security forces must exercise maximum restraint and calibrate their use of force,” United Nations Secretary-General António Guterres said in a statement. “The indiscriminate launching of rockets and mortars towards Israeli population centers is unacceptable.”

The conflict spilled over into the streets in Israel. Jewish and Arab Israelis could be seen fighting in cities such as Lod, where thousands of Arabs joined a funeral for a man allegedly killed by a Jewish gunman the previous night. The crowd clashed with police, set alight a synagogue, as well as around 30 vehicles including a police car, The Associated Press reported.

In neighboring Ramle, ultranationalist Jewish demonstrators were filmed attacking cars belonging to Arabs, the AP said, while in the northern port town of Acre, protesters torched a Jewish-owned restaurant and hotel.

Police said they arrested more than 150 people involved in “disturbances and riots” overnight in northern and central Israel.

The current hostilities have their roots in east Jerusalem, which has some of the holiest sites in Islam, Judaism and Christianity. The city is claimed by both Israel and the Palestinians as their capital.

Tensions that had been simmering during the Muslim holy month of Ramadan flared up over the past week as Israeli police used stun grenades and rubber-coated bullets against worshippers at the Al-Aqsa Mosque compound, an important holy site for Muslims and Jews.

Israeli officials said this was in response to rocks thrown at their forces and toward the Western Wall, where thousands of Jews had gathered to pray. A spokesperson for the mosque said the clashes began when police tried to evacuate the compound, where many Palestinian worshippers sleep during Ramadan, to allow Israelis in.

The unrest has been fueled further by plans to evict Palestinian families from a neighborhood in east Jerusalem whose land is claimed by Jewish settlers and that is home to the tomb of an ancient Jewish high priest.

The Al-Aqsa clashes saw Hamas, the militant group that governs the Gaza Strip, set a deadline for Israel to withdraw its security forces.

By Wednesday morning, some 1,050 rockets had been fired from Gaza toward Israel, the Israeli Defense Forces said. Between 85 and 90 percent were intercepted by Israel’s Iron Dome defense system, officials said, but scores made it through.

The nonstop barrages left long streaks of white smoke in their wake, while the explosions of anti-rocket interceptors boomed overhead.

“I called my husband to go to the shelter. After a few minutes at 3 a.m. there was a second siren and then I felt a boom,” said Amar Shoshana, 73, whose neighbor’s house was hit by a rocket in Yehud, near Tel Aviv.

“It felt like my house had collapsed,” she said. “We smelled a burning smell, we went outside and it was foggy, and we saw that the family’s house was hit. They were in their shelter.”

The Israeli military responded by launching the bombardment of Gaza, the tiny, impoverished enclave that is blockaded to the north and east by Israel and to the south by Egypt.

The booms of Israeli airstrikes and hisses of outgoing rocket fire could be heard in Gaza throughout Tuesday, and large plumes of smoke rose into the air.

Samah Haboub, a mother of four in Gaza, said she was thrown across her bedroom in a “moment of horror” by an airstrike on an apartment tower next door, the AP reported. She and her children, ages 3 to 14, ran down the stairway with other residents, many of them screaming and crying.

“There is almost no safe place in Gaza,” she said.

The 13-story residential block that was leveled, Hanadi Tower, was the tallest building in the strip before its destruction Tuesday.

No casualties were reported there, but the destruction of apartment towers was among the tactics used during the 2014 war that are now the subject of an International Criminal Court investigation into possible war crimes. Israel is not a member of the court and rejects the investigation.

ICC prosecutor Fatou Bensouda said in a statement Wednesday that she noted “with great concern” the escalation of violence. She said there had been the “possible commission of crimes under the Rome Statute” that established the court, and called “for calm, restraint and a stop to the violence.”

Israel said it was targeting Hamas leaders and other sites linked to the group, which is considered a terrorist organization by Israel and the U.S.

He also addressed the violence overnight between Arab and Jewish Israelis, saying that Israel “will impose governance and restore Acre and the cities of Israel to the track of integration, success and taking full part in the wonder that is Israel.”

The Israeli military says it is “trying to minimize civilian casualties in Gaza” by only targeting Hamas-related sites and firing warning shots so civilians can escape. The military said it was investigating reports that Palestinian children have died.

“We are conducting significant strikes against military targets belonging to Hamas, and Islamic Jihad,” military spokesman Jonathan Conricus told NBC News in an interview. “And our plans are to continue with those attacks and to enhance when necessary.”

He said a cease-fire was currently “not on the table.” The end of the conflict, he said, would depend on “how well and how fast they get the message,” referring to Hamas, “and how well they understand that it will be in their best interest to stop firing at Israeli civilians.”