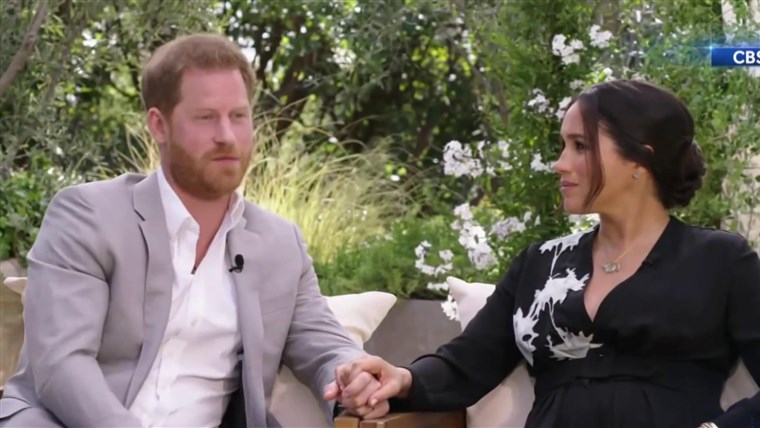 LONDON — Prince Harry’s wife, Meghan, the Duchess of Sussex, was “saddened” by allegations published Tuesday evening in a U.K. newspaper accusing her of bullying staff during her time at Kensington Palace.

The report in the Times newspaper, which quotes unnamed sources and contains details not independently verified by NBC News, comes days before media mogul Oprah Winfrey’s hotly-anticipated interview with Meghan and Harry.

“The Duchess is saddened by this latest attack on her character, particularly as someone who has been the target of bullying herself and is deeply committed to supporting those who have experienced pain and trauma,” a spokesperson for the Duke and Duchess of Sussex told NBC News.

“She is determined to continue her work building compassion around the world and will keep striving to set an example for doing what is right and doing what is good.”

The Times claims to quote an email allegedly sent to a senior royal official in 2018 by Harry and Meghan’s former communications secretary, Jason Knauf. NBC News has not seen the email.

The Times said that no action was ever taken over the alleged bullying claims.

Buckingham Palace said in a statement it was “very concerned about the allegations,” adding that its human resources would “look in the circumstances outlined in the article.”

“Members of staff involved at the time, including those who have left the Household, will be invited to participate to see if lessons can be learned,” the statement said. “The Royal Household has had a Dignity at Work policy in place for a number of years and does not and will not tolerate bullying or harassment in the workplace.”

In an interview with television host James Corden last week, Harry, grandson of Queen Elizabeth II, said that Britain’s “toxic” press was one of the reasons he stepped back from his life as a senior royal.

“It was a really difficult environment, as I think a lot of people saw. We all know what the British press can be like and it was destroying my mental health,” he said.

He echoed that sentiment in his interview with Winfrey, saying that “it’s been unbelievably tough for the two of us,” according to a preview clip of the program released Sunday.

Meghan didn’t speak in the previews released ahead of the Winfrey interview, scheduled to air on CBS on Sunday evening. A press release said that Meghan will discuss her life as a royal, motherhood and philanthropic work.

“You said some pretty shocking things here,” Winfrey said in one of the two clips, with no indication of what she was referring to.

Harry and Meghan, who now live in California and are expecting their second child, announced in January 2020 that they were stepping back from their roles as senior members of the royal family. Their new position was due to be reviewed a year after they left.

It’s been less than three years since the couple married in a star-studded wedding at Windsor Castle. Meghan was hailed at the time for modernizing the monarchy.

After the birth of their first child in 2019, Meghan opened up about her life and the constant media spotlight, saying how difficult it was on her.

“Any woman, especially when they’re pregnant, you’re really vulnerable,” she said in an interview with U.K. broadcaster ITV.