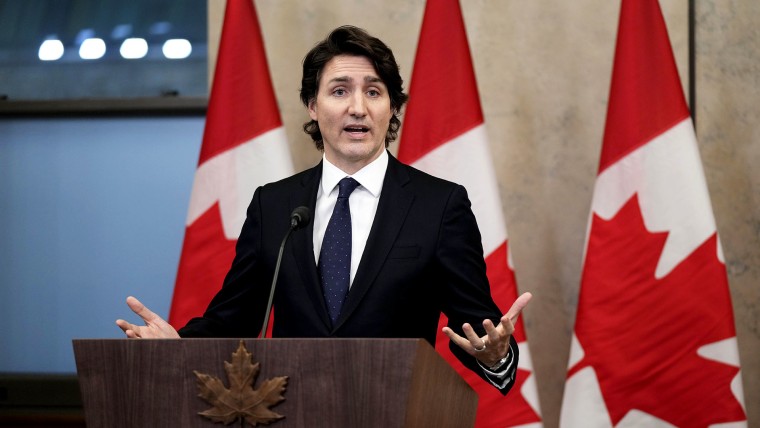 Ontario Premier Doug Ford declared a state of emergency on Friday and said he’ll use all government resources to end a two-week protest by Canadian truckers over Covid-19 rules. And hours later, a judge ordered protesters at the Ambassador Bridge over the U.S.-Canadian border to leave.

Ford said the trucker protest amounts to a “siege” of downtown Ottawa and the Ambassador Bridge, which connects Windsor and Detroit.

“It’s an illegal occupation,” Ford told reporters. “This is no longer a protest.”

After the judge’s order, police warned that anyone blocking streets or helping to block streets could be arrested. It was not immediately clear when or if law enforcement officers would be sent in to remove the demonstrators.

Chief Justice Geoffrey Morawetz of the Ontario Superior Court said during a virtual hearing that the order would be effective at 7 p.m. to give protesters time to leave.

His decision came after a 4 1/2-hour court hearing at which the city of Windsor and lawyers for auto parts makers argued that the blockade was causing undue economic harm for the city and region.

Supporters of the protesters, some of them truckers, argued that an order would disrupt their right to peacefully protest vaccine mandates that hinder their ability to earn a living.

“The border cannot and will not remain closed,” Trudeau told reporters on Friday.

Trudeau echoed Ford’s remarks of downplaying use of police or military force to restore order.

But the prime minister raised eyebrows by saying “everything is on the table” in terms of possible federal action.

“There are further steps for law enforcement to take,” Trudeau said.

“We’re a long way from ever having to call in the military. Although, of course, we have to be ready for any eventuality. But it is not something we are seriously contemplating at this time.”

Truckers had been staging a protest that had shut down Ottawa’s core over various Covid-19 rules, leading the mayor of Canada’s capital to declare a city state of emergency on Sunday.

Dubbed the “Freedom Convoy,” hundreds of protesters have been using their trucks to block city streets, blare their horns and disrupt traffic.

Ford, the brother of late former Toronto Mayor Rob Ford, said he respects the right of truckers to protests, “but like all rights, these are not without reasonable limits.”

“There is a wide difference between a demonstration that people make their point and go home and people (who) put their lives, their family’s lives and communities at risk,” Ontario Solicitor General Sylvia Jones said.

“That’s unfortunately what we are now seeing in Windsor and of course in Ottawa for the last number of days, over a week.”

“In Michigan, our economic momentum is at risk because commercial traffic is at a standstill at the Ambassador Bridge and heavily backed up at the Blue Water Bridge,” she said in a statement on Friday. “I’m continuing to take action to ensure Michigan workers and families are supported.”

The protest has also sparked backlash in both Ottawa and across Canada over alleged harassment as well as the presence of Confederate flags and flags bearing swastikas.

A majority of Canadians oppose the truckers’ actions, according to an Ipsos poll.