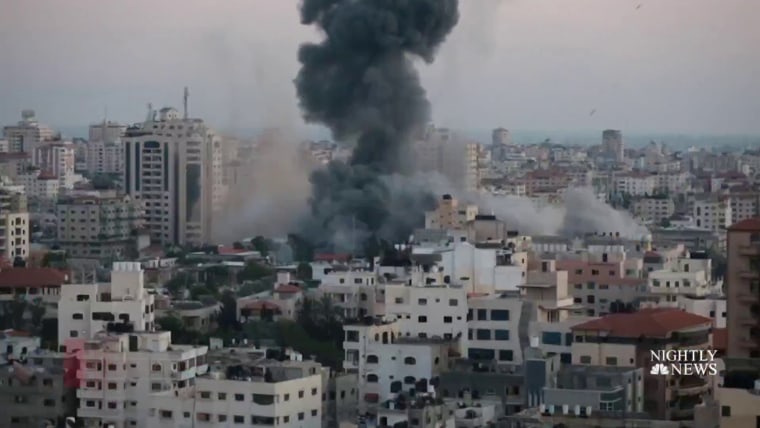 Israeli warplanes pounded the Gaza Strip on Saturday, killing at least eight children in a refugee camp and flattening a high-rise building that housed the offices of international media outlets, as Hamas unleashed a new barrage of rockets targeting central Israel.

The bombardments — for a sixth consecutive day — fed fears of a return to all-out war between Israel and the militant group Hamas.

U.S. diplomat Hady Amr arrived Saturday in the Israeli city of Tel Aviv to meet with senior Israeli and Palestinian officials to push for calm. Meanwhile, the United Nations’ High Commissioner for Human Rights warned that attacks being carried out by both sides may constitute “serious violations of international humanitarian law.”

One rocket hit a neighborhood in central Israel’s Ramat Gan, a suburb of Tel Aviv, where raw footage showed fire and debris in the streets. The Magen David Adom ambulance service said one man died at the scene.

The Hamas rocket fire targeting central Israel came just hours after the Israeli airstrike on the al-Shati refugee camp to the west of Gaza City. In addition to the eight children killed, two adults died in the strike, according to the Palestinian Health Ministry, making it one of the deadliest single incidents since the long-running conflict between Israel and Hamas reignited earlier this week.

Mohammed Hadidi told reporters his wife and five children had gone to celebrate the Eid al-Fitr holiday with relatives, according to The Associated Press. She and three of the children, ages 6 to 14, were killed, while an 11-year-old was missing, he said. Only his 5-month-old son, Omar, was known to have survived.

Live footage later showed an Israeli airstrike destroying a high-rise building that housed the offices of The Associated Press and Al-Jazeera in the Gaza Strip. The AP said the building was hit about an hour after Israel’s military ordered people to evacuate the tower, which was also home to other offices and apartments.

Gary Pruitt, the president and CEO of The Associated Press, said he was “shocked and horrified” that the Israeli military targeted and destroyed the building.

“This is an incredibly disturbing development,” he said. “We narrowly avoided a terrible loss of life. A dozen AP journalists and freelancers were inside the building and thankfully we were able to evacuate them in time.”

The Committee to Protect Journalists called for a “detailed and documented justification” for the military action, while White House press secretary Jen Psaki tweeted that “we have communicated directly to the Israelis that ensuring the safety and security of journalists and independent media is a paramount responsibility.”

President Joe Biden and Israeli Prime Minister Benjamin Netanyahu spoke on the phone about the situation with Gaza.

The statement added that he “thanked the President for the unreserved support of the United States for our right to defend ourselves.”

Netanyahu also “emphasized in the conversation that Israel is doing everything to avoid harming those not involved, and proof of this is that in towers where there are terrorist targets attacked by the IDF, they are being evacuated from those not involved,” according to the statement.

The U.N.’s High Commissioner for Human Rights expressed concern Saturday that the situation was deteriorating “at an alarming rate,” warning that attacks being carried out by both sides may constitute “serious violations of international humanitarian law.”

“Rather than seeking to calm tensions, inflammatory rhetoric from leaders on all sides appears to be seeking to excite tensions rather than to calm them,” Commissioner Michelle Bachelet said in a statement. “I urge both sides to ensure strict respect for their obligations under international law … Those found to be responsible for violations must be held to account.”

The latest chapter in the conflict between Israel and Hamas, the militant group governing Gaza, was triggered by unrest in Jerusalem. Since Monday, Hamas has fired more than 2,300 missiles into Israel and Israel’s military has pummeled the tiny, impoverished Gaza, home to 2 million Palestinians, with airstrikes.

While the recent clashes initially were largely restricted to Gaza, they spread to the West Bank on Friday, where health officials said 11 people died and more than 250 were injured.

Violence between Jews and Arabs, meanwhile, has swept several cities and neighborhoods in Israel. Scenes of vigilante mobs beating people and hurling stones have unsettled the nation and sparked appeals for calm, but showed no signs of abating.

A 12-year-old Arab boy suffered burns to his face and was hospitalized in serious condition after an apparent arson attack on his home in Jaffa, adjacent to Tel Aviv, according to Sheba Hospital in Tel Hashomer.

Palestinians on Saturday are set to mark Nakba Day, which commemorates the displacement of hundreds of thousands of people during Israel’s creation in 1948. Demonstrations in support of their cause were underway in several cities around the world, including London and Berlin.

Netanyahu had warned Friday that more attacks would come, saying Hamas “attacked our capital, they sent missiles to our city, they pay a heavy price for it.”

The Israeli military has called up 9,000 reservists and massed troops along its border with Gaza. While there was alarm and confusion late Thursday after the Israeli military announced “ground troops” were attacking the area, the military later clarified that its forces were within its country’s borders and had not invaded Gaza.