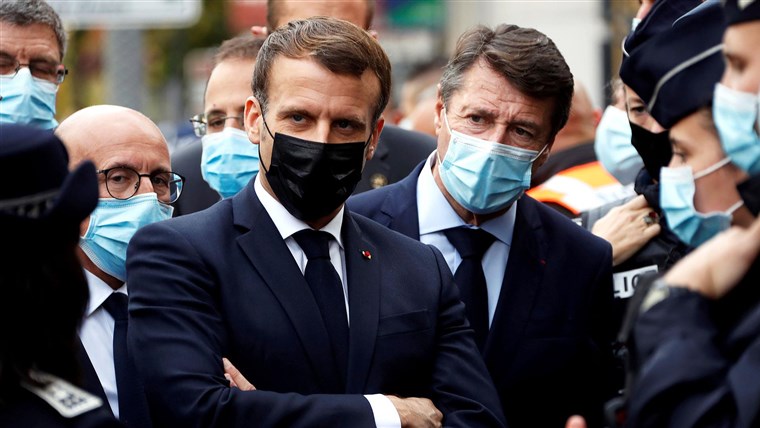 The attack that left three people dead in the Notre Dame basilica in the French city of Nice has led hard-liners to double down on their messages.

The far-right figure Marine Le Pen told France’s BFM TV on Friday that “Islamism is waging war on us.”

The attack Thursday by a man identified by investigators as a 21-year-old Tunisian national was immediately condemned by the French Council for the Muslim Faith, as well as several Muslim-majority countries, including Saudi Arabia, Egypt and Turkey.

Meanwhile, in Italy, former Deputy Prime Minister Matteo Salvini, the leader of the right-wing party known as the League, attacked his country’s government after it emerged that the suspect had entered Europe through the Italian island of Lampedusa.

While the official French doctrine of colorblindness is intended to ignore ethnic and religious backgrounds and to view all French citizens as equally French, some mainstream politicians in the country have also hardened their rhetoric.

“We are at war with an enemy that is both an enemy from inside and outside,” Interior Minister Gerald Darmanin told RTL Radio on Friday.

Darmanin, a member of President Emmanuel Macron’s centrist En Marche party, added that the country, which is home to Europe’s largest Muslim population, should brace itself for further attacks.

Angry comments also emanated from some Muslim countries and figures.

Former Malaysian Prime Minister Mahathir Mohamad, 95, tweeted Thursday: “Muslims have a right to be angry and to kill millions of French people for the massacres of the past. But by and large the Muslims have not applied the ‘eye for an eye’ law. Muslims don’t. The French shouldn’t.”

He later said his statement had been taken out of context, denied promoting violence and criticized Facebook and Twitter for removing his posts.

Gulbuddin Hekmatyar, an Afghan politician who was long designated a militant by the U.S. but has recently made peace with the Washington-backed government in Kabul, warned Macron that if he doesn’t “control the situation, we are going to a Third World War, and Europe will be responsible.”

Tens of thousands of people took to the streets in Turkey, Lebanon, Bangladesh and other predominantly Muslim countries Friday. Some burned effigies of Macron, while others cried “death to France” and called for a boycott of French products.

Tensions were already running high in France after Samuel Paty was beheaded in a Paris suburb last month by a young Chechen man, apparently incensed that Paty, a middle school teacher, had shown caricatures of the Prophet Muhammad by the satirical magazine, Charlie Hebdo, in one of his classes.

The magazine had recently republished the images to mark the start of a terrorism trial in the killings at its offices and a kosher supermarket in Paris in January 2015.

Macron has refused to condemn the cartoons and has championed his country’s secularist principles.

But the caricatures, considered blasphemous by Muslims, have provoked anger across the Islamic world.

“Secularism is a kind of fundamentalism of its own,” said Andrew Hussey, a cultural historian and author of the “The French Intifada: The Long War Between France and Its Arabs.”

The “two very opposing ways of seeing the world” seem to be “irreconcilable,” he said. With neither side likely to back down on its worldview, Hussey said, the emotional climate is “terribly overheated.”

Some in France say the debate is harming the country.

“Our own discourse in France is radicalizing,” said François Héran, a French sociologist and academic at the Collège de France in Paris, adding that it was “a mistake” to conflate freedom of expression with French identity.

Instead, Héran said, freedom of speech has “limits” that are being forgotten in the public discourse as “the pressure of the far right is very, very strong.”