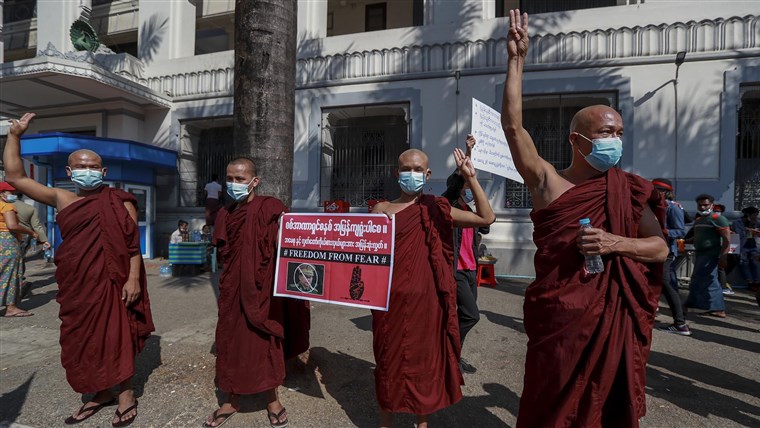 WASHINGTON — President Joe Biden announced Wednesday that his administration will impose sanctions against those involved in last week’s military coup in Myanmar and demanded that the country immediately return power to that nation’s democratically elected government.

The sanctions will target military leaders who directed the coup, as well as their business interests and close family members. The first round of specific individuals targeted for the sanctions will be identified later this week, Biden said.

His administration will also impose export controls and freeze U.S. assets that benefit Myanmar’s government, but will continue to uphold support for health care and other benefits that directly support the country’s citizens.

“Today, I again call on the Burmese military to immediately release the democratic political leaders and activists,” Biden said. “The military must relinquish power seized and demonstrate respect for the role of the people of Burma as expressed in their November 8th election.”

Myanmar’s military seized control of the country Feb. 1 after detaining the civilian leader and democratically elected Aung San Suu Kyi. The military went on to impose an internet blackout and restrictions on gatherings as protests have flared throughout the country, at times turning violent.

The U.S. formally declared the military takeover a coup, triggering a review of U.S. foreign aid.

“As protests grow, violence against those asserting their democratic rights is unacceptable and we’re going to keep calling it out,” Biden said. “The world is watching and we’ll be ready to impose additional measures.”

Biden said he had been in contact with allies and partners around the world to discuss the situation in Myanmar and said he planned to use the administration’s “renewed engagement” with the United Nations Human Rights Council to “strengthen the world’s commitment to human rights” in Myanmar.

Barack Obama, who became the first American president to visit the country, lifted sanctions on Myanmar in 2016 after the government undertook a series of democratic reforms that began in 2011. Those reforms culminated in the 2015 election of Suu Kyi as a civilian leader alongside the military.

There have been recent concerns that Myanmar was backsliding toward authoritarianism, including the military’s ethnic cleaning of Rohingya Muslims. Suu Kyi, who won a a Nobel Peace Prize for her fight for democracy and was celebrated by the international community as an icon of human rights, defended Myanmar against the allegations of genocide.