Visiting Coba, Mexico: A Guide To The Mayan Ruins 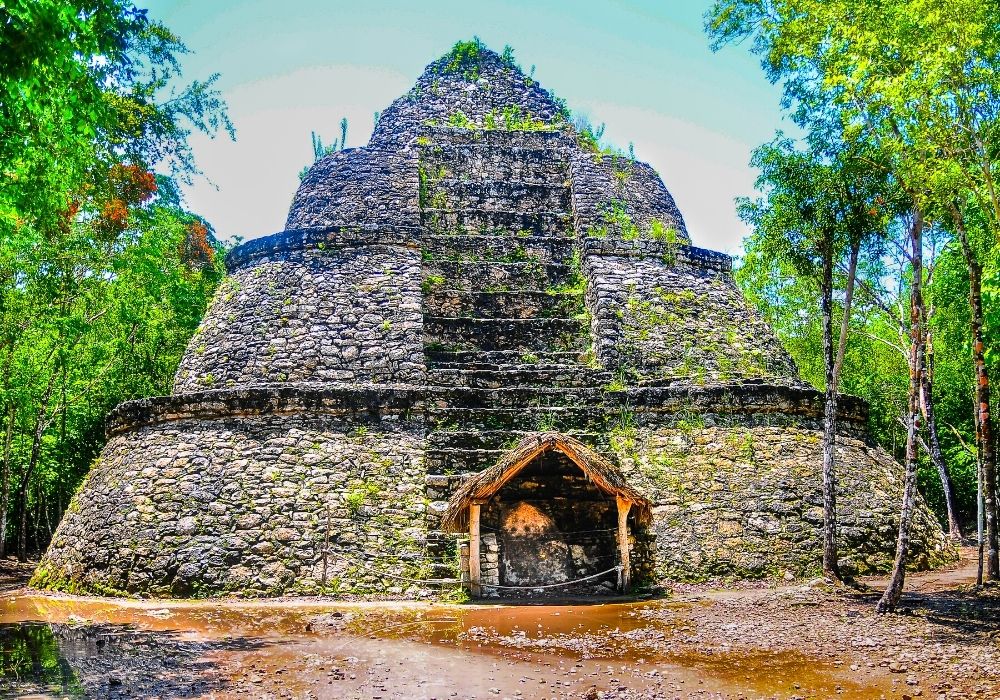 Exploring the Mayan ruins of Coba is a different experience than visiting its more famous neighbors Chichen Itza or Tulum.

You can climb Coba’s tallest pyramid for incredible panoramic views of the surrounding rainforest.

Indeed, nature is half the attraction at Coba. The enormous site is deep in the jungle, where you’ll see huge ceiba trees covered in vines, sunbathing iguanas, and countless tropical birds. You may even get lucky and spot a spider monkey or an ocelot.

Several different clusters of pyramids and temples are linked by long paths through dense foliage. With the opportunity to rent a bicycle and see the site on two wheels, a day at the Coba ruins involves a lot more than mere sightseeing.

Coba was one of the first Mayan archeological sites I visited on my first trip to the Yucatan more than a decade ago. Many years and pyramids later, it’s still one of my favorites — especially for the chance to ride a bicycle through an ancient city overgrown by jungle.

There are many incredible places to see and ruins to visit in Mexico. Learn all you need to know about Coba in this article.

History of the Coba Mayan Ruins

Coba was first settled between 100 and 300 CE, and from 300 to 600 CE gained prominence in the area as an important political and economic center.

Its peak of development was from 800 to 1100 CE, during which time Coba may have had the largest population in the ancient Mayan world.

Sometime then, Coba began a long power struggle with Chichen Itza to the north, eventually losing importance as Chichen Itza grew to dominate the region and cities on the coast like Tulum flourished.

By the time the Spanish conquistadors arrived in the Yucatan in the early 16th century, Coba was already abandoned, lost, and overgrown by vegetation.

One of the most significant features of the Coba archeological site is its elevated stone roads called sacbeob, singular sacabe, which means “white road.” They connected the central part of the city with the surrounding areas where the regular citizens lived.

There are more than 50 sacbeob near Coba, and several cross the site in nearly straight lines. The longest continues for more than 100 kilometers (62 miles) all the way to the ruins of Yaxuna near Chichen Itza.

The ruins at Coba also have many steles, which are sculpted stone monuments depicting important events in the lives of the ruling class. They can be seen throughout the Coba archeological site, often at the bases of pyramids and temples.

Like other archeological sites in the Yucatan, Coba’s biggest draw is its tall pyramids, including Nohoch Mul, one of the highest in the Mayan world.

A little lumpy and uneven, they lack the straight lines and perfect angles of other ruins like Tikal or Chichen Itza, somewhat resembling irregular stone staircases to the sky.

Other interesting structures include an astronomical observatory, two ball courts, and various temples.

The Coba Group has the most structures and is closest to the entrance. It’s built next to Macanxoc Lake, one of the five lakes in the area that provided water to the ancient city.

The Coba Group contains a ball court, several steles, and the Iglesia (church), one of the tallest Coba pyramids. 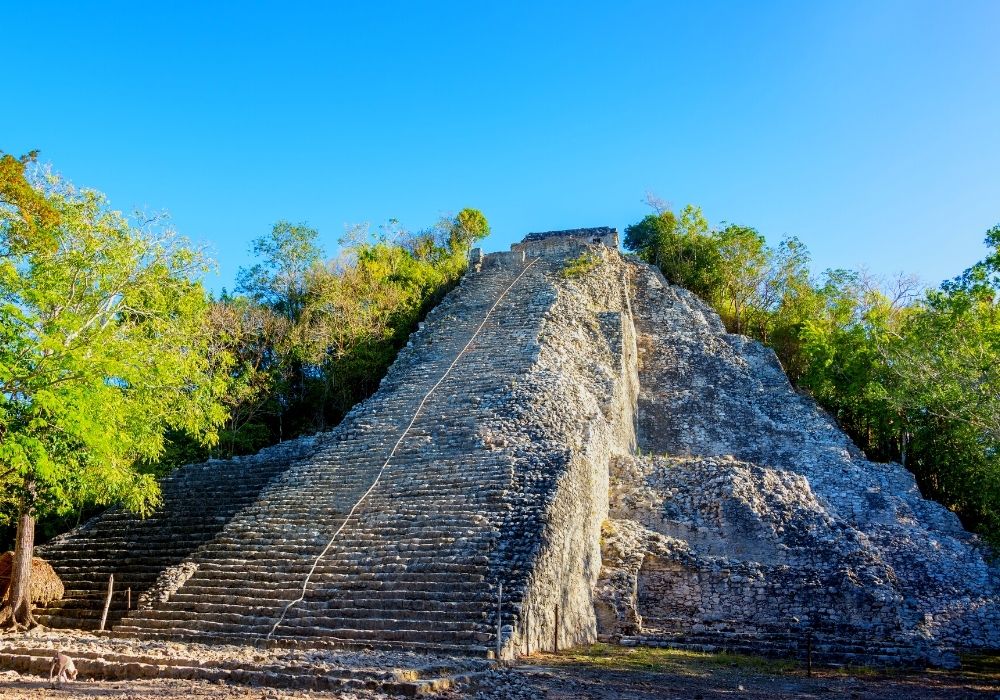 The Pinturas Group and the D Group, which contains the other ball court, are located roughly between the three other groups.

The most recent constructions in the city were made in the Pinturas Group, among them the Pinturas Temple, which contains 13 small altars.

The Nohoch Mul Group is named after the largest Coba pyramid, which at 42 meters (137 feet) tall is also one of the tallest on the Yucatan Peninsula.

At the top of the pyramid is a temple with carvings of the Descending God, an important Mayan deity.

The Macanxoc Group contains eight steles and several ceremonial altars, suggesting that it was an important spiritual center for the city.

Things to Do at the Coba Ruins

You have three options for exploring the ruins at Coba: walking, renting a bicycle, or hiring a guide who will pedal you around on a big tricycle.

It’s a large place, covering more than 70 square kilometers (about 40 square miles), so riding a bicycle is a fun and practical option.

The longest path goes for two kilometers (1.2 miles) from the entrance to the most distant excavated structures in Coba. 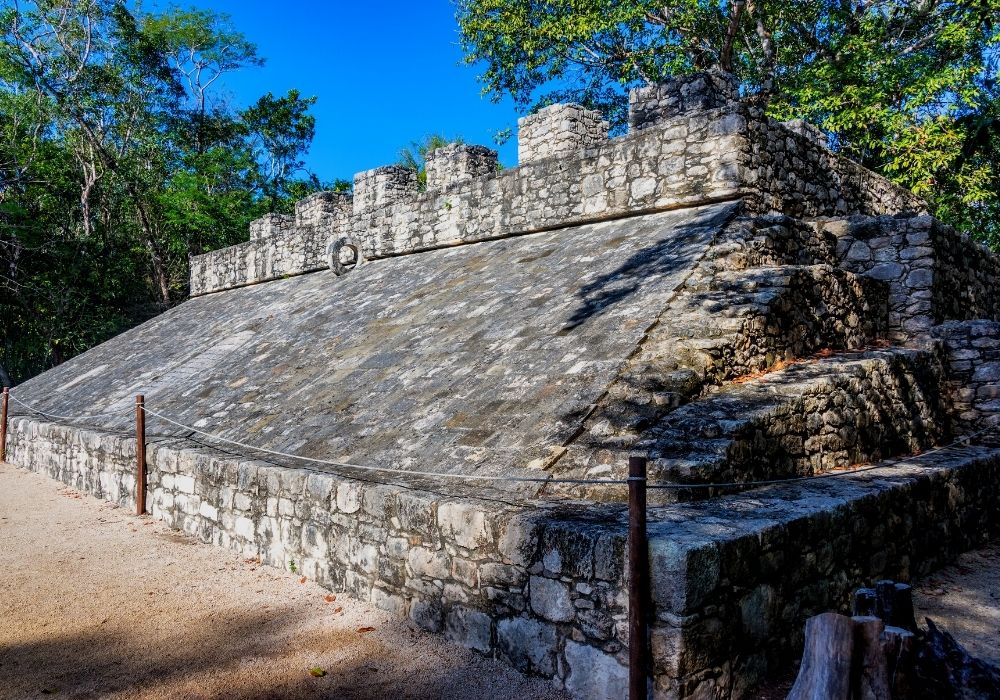 Because it’s so large, it takes at least two hours to visit the Coba ruins, even by bicycle.

If you prefer not to exert yourself in the heat, then check out the prices for the tricycle. It’s the same vehicle as the ones used by tamal sellers and other street vendors in Mexico.

The driver pedals in the back, and there’s a seat for two up front where the steaming tamales would normally be.

Outside the archeological site, you can check out the restaurants and souvenir shops in the little town next to Coba Lake. The lake has a viewing platform where you can look for its resident crocodiles.

If you’re craving a rush of adrenaline, head to the zipline tower, also in town.

There are several cenotes (freshwater sinkholes) near Coba, such as Cenote Choo Ha only 10 minutes by car from the entrance and Cenote Tankach Ha a little beyond.

Tankach Ha means “deep waters,” and with depths up to 35 meters, it’s one of the deepest cenotes in the area.

Another nearby is Cenote Multun Ha, which is noteworthy for a pile of rocks under the water that resembles a Mayan pyramid.

Where Are the Coba Ruins Located?

The Coba Mayan ruins are located about 50 kilometers (about 30 miles) to the northwest of Tulum. You can get there in about 45 minutes by car or an hour on a public bus.

Buses leave from the Tulum ADO bus station in the middle of town. You can check the ADO website for schedules and to purchase tickets online (often for a discount), or stop in a day or so before your trip to buy tickets in advance.

If you’d prefer, this affordable tour offers round trip transportation from your hotel in Tulum, visiting Coba Ruins and two cenotes. You’ll have lots of free time as well.

When is the Best Time to Visit Coba?

The weather is beautiful and sunny year-round on the Yucatan Peninsula. The rainy season begins in late spring and lasts until the fall, and it’s a lot hotter in the summer, especially because of Coba’s inland location.

Something to keep in mind is that the ruins may get extremely crowded during peak travel season and Mexican holidays.

Peak travel season in Mexico goes from late December to early January (with the busiest time between Christmas and the New Year), and from late July to early August. 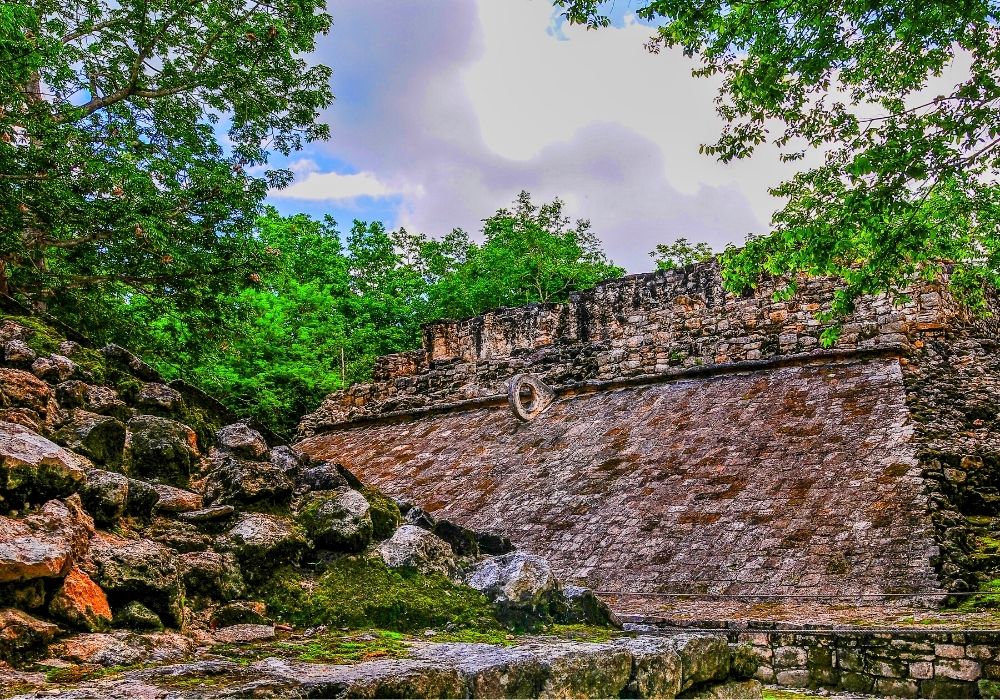 Another time you should absolutely avoid is Semana Santa (Holy Week), the week before Easter, when many Mexicans travel.

Also, because the Coba archeological site is free for Mexican citizens and foreign residents of Mexico to enter on Sundays, it can get crowded then as well.

Try to get to the ruins right when they open in the morning.

Not only can you have a few hours of exploring (and pedaling a bicycle) before the hottest part of the day in the early afternoon, but you’ll also have a head start on the large tour groups that begin arriving around 11 AM.

The Coba ruins are a little out of the way for frequent public transportation, particularly from anywhere other than Tulum, such as Playa del Carmen or Cancun. Because of this, joining a tour can be a good idea.

Many tours include a stop at another archeological site or a cenote, one of the freshwater sinkholes found throughout the Yucatan Peninsula that’s great for swimming, snorkeling, and scuba diving.

From Tulum: Coba Ruins and Cenotes

This is the best tour of the Coba ruins from Tulum. It includes round trip transportation from your hotel, Coba Ruins visit, two cenotes, and the Tulum Ruins as well. It’s affordable and you’ll have free time as well. Learn more here.

On this tour, you’ll visit Coba after seeing the Mayan ruins of Tulum and swimming in a cenote. It leaves from Cancun and includes a buffet lunch of Yucatan specialties.

You’ll visit the three of the most popular archeological sites in the Mayan Riviera on this tour, which is practical if you’re staying in Cancun and have limited time. It also includes the bicycle rental in Coba, lunch, and a swim in the Ik-Kil cenote.

On this eight-hour tour, after exploring the site by bicycle, you’ll either make pottery and learn cooking techniques in a Mayan village or swim in a cenote and ride a zipline. The tour leaves from Playa del Carmen and includes dinner.

Entrance to the Coba ruins costs 80 pesos ($4 USD). Make sure you bring pesos, not dollars or another currency.

On Sundays, entrance for Mexican citizens and foreign residents in Mexico is free.

These hours may change as COVID-19 restrictions are removed. Check the official website of the Coba ruins for updates.

Parking at the Coba Ruins

There are several parking lots near the entrance, which are run by the local community. Depending on the time of year, you can expect to pay between $50 and $100 pesos ($2.5 to $5 USD) to park.

Can You Climb the Coba Ruins?

Yes, these ruins are famous for allowing visitors to climb many of the Coba pyramids, including Nohoch Mul, the tallest at the site and one of the tallest in the Mayan world.

The view from the top is incredible: a vast flat expanse of the vivid green forest canopy, with a few white pyramids poking out above the trees.

Currently, due to COVID-19 restrictions, climbing isn’t possible. However, it’s been said that climbing will resume in 2022. Either way, visiting the Coba Ruins is a must.

Guides to Other Ancient Ruins in Mexico:

1. Make sure to bring mosquito repellant, sunscreen, snacks, and lots of water. There are several shops in town where you can pick up whatever you forgot.

2. Bring Mexican pesos, not U.S. dollars or another currency, for bicycle rentals, hiring a guide, and anything else you may need.

Sure, guides will gladly accept U.S. dollars, but they’ll flagrantly overcharge you. If you’re worried about being overcharged or don’t want to haggle, look for signs near the bike rentals that show the prices. 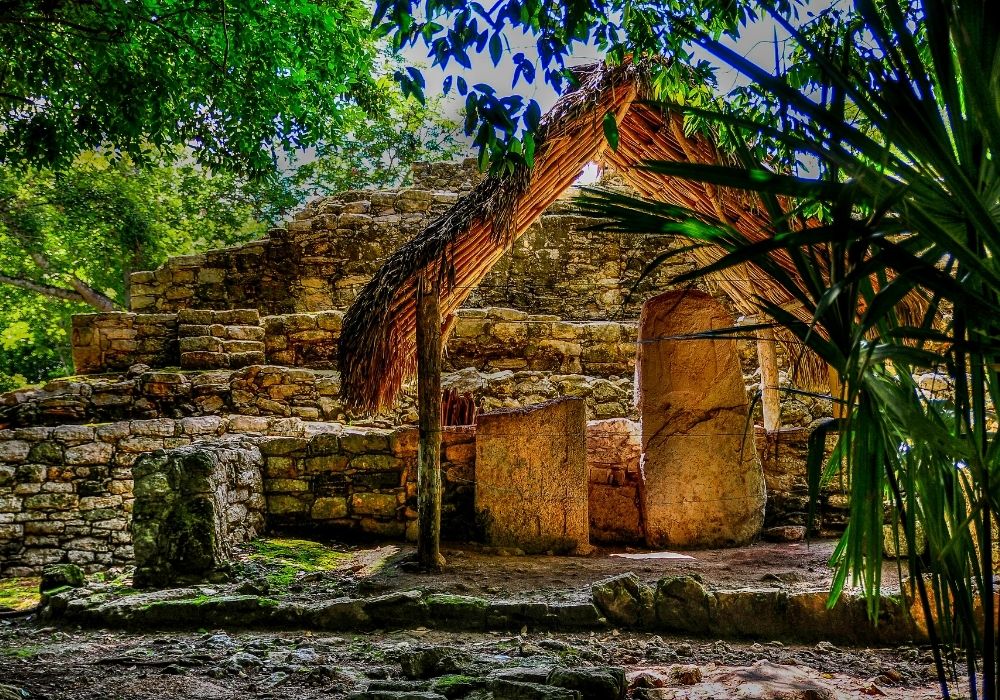 3. Get there early. If you wait too long, the crowds will form and the sun will get high in the sky, making the place really hot.

4. Stop by a cenote on the way back. It’s a great way to cool off after a day in the heat, and there are several convenient ones nearby. A good one closer to Tulum is Gran Cenote, one of the largest in the area.

5. If you plan on swimming in a cenote, don’t wear sunscreen — it’s bad for the water. This means you should cover up even more than usual for your visit to Coba, with a hat and long sleeves.

If you love nature and hate crowds, you may end up enjoying Coba more than its better-known counterparts Chichen Itza and Tulum.

Add to this the chance to ride a bike through the massive site, and a trip to Coba becomes even more appealing. It’s definitely one of the best things to do on a trip to the Mayan Riviera in Mexico.

The post Visiting Coba, Mexico: A Guide To The Mayan Ruins appeared first on Goats On The Road.