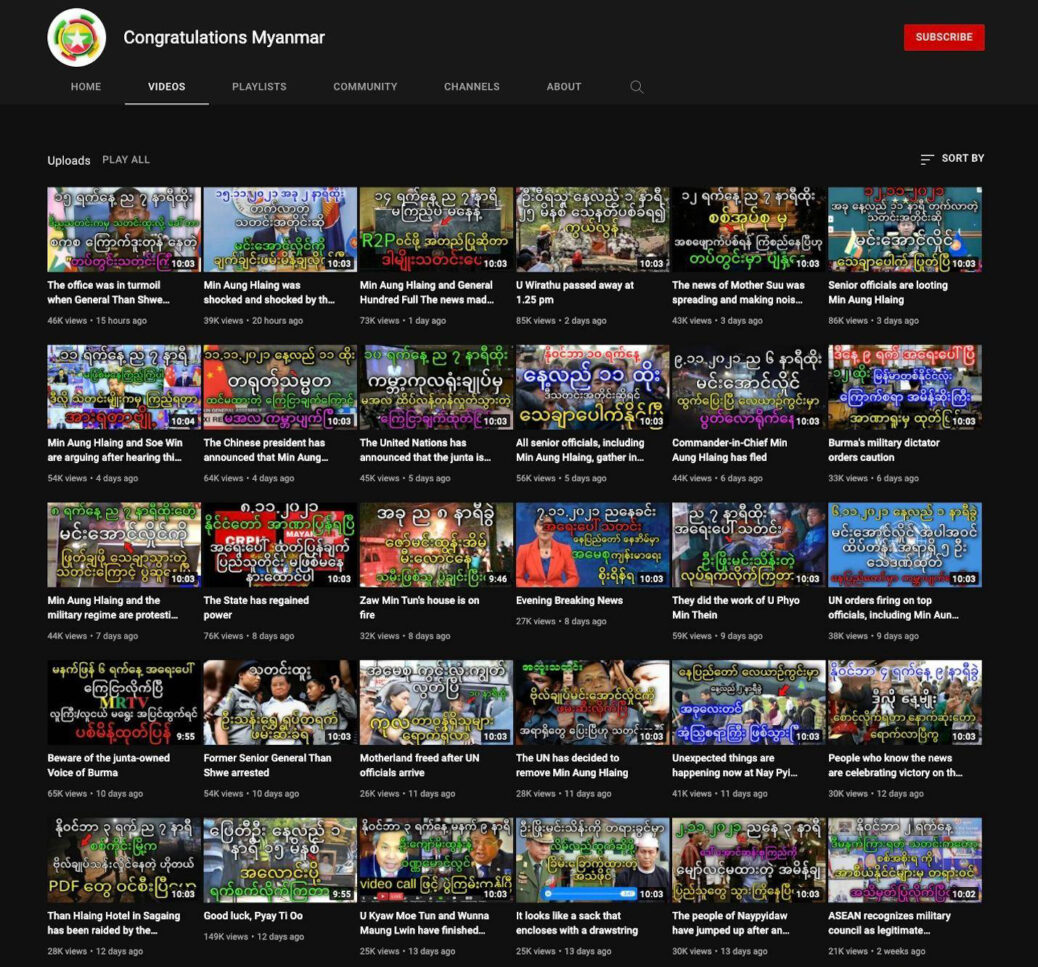 There were hundreds of them, racking up tens of thousands of engagements and hundreds of thousands of views. As of early November, MIT Technology Review found dozens of duplicate fake Live videos from this time frame still up. One duplicate pair with over 200,000 and 160,000 views, respectively, proclaimed in Burmese, “I am the only one who broadcasts live from all over the country in real time.” Facebook took several of them down after we brought them to its attention but dozens more, as well as the pages that posted them, still remain. Osborne said the company is aware of the issue and has significantly reduced these fake Lives and their distribution over the past year.

Ironically, Rio believes, the videos were likely ripped from footage of the crisis uploaded to YouTube as human rights evidence. The scenes, in other words, are indeed from Myanmar—but they were all being posted from Vietnam and Cambodia.

Over the past half-year, Rio has tracked and identified several page clusters run out of Vietnam and Cambodia. Many used fake Live videos to rapidly build their follower numbers and drive viewers to join Facebook groups disguised as pro-democracy communities. Rio now worries that Facebook’s latest rollout of in-stream ads in Live videos will further incentivize clickbait actors to fake them. One Cambodian cluster with 18 pages began posting highly damaging political misinformation, reaching a total of 16 million engagements and an audience of 1.6 million in four months. Facebook took all 18 pages down in March but new clusters continue to spin up while others remain.

For all Rio knows, these Vietnamese and Cambodian actors do not speak Burmese. They likely do not understand Burmese culture or the country’s politics. The bottom line is they don’t need to. Not when they’re stealing their content.

Rio has since found several of the Cambodians’ private Facebook and Telegram groups (one with upward of 3,000 individuals), where they trade tools and tips about the best money-making strategies. MIT Technology Review reviewed the documents, images, and videos she gathered, and hired a Khmer translator to interpret a tutorial video that walks viewers step by step through a clickbait workflow.

The materials show how the Cambodian operators gather research on the best-performing content in each country and plagiarize them for their clickbait websites. One Google Drive folder shared within the community has two dozen spreadsheets of links to the most popular Facebook groups in 20 countries, including the US, the UK, Australia, India, France, Germany, Mexico, and Brazil.

The tutorial video also shows how they find the most viral YouTube videos in different languages and use an automated tool to convert each one into an article for their site. We found 29 YouTube channels spreading political misinformation about the current political situation in Myanmar, for example, that were being converted into clickbait articles and redistributed to new audiences on Facebook.

After we brought the channels to its attention, YouTube terminated all of them for violating its community guidelines, including 7 of which it determined were part of coordinated influence operations linked to Myanmar. Choi noted that YouTube had previously also stopped serving ads on nearly 2,000 videos across these channels. “We continue to actively monitor our platforms to prevent bad actors looking to abuse our network for profit,” she said.

Then there are other tools, including one that allows prerecorded videos to appear as fake Facebook Live videos. Another randomly generates profile details for US men, including image, name, birthday, Social Security number, phone number, and address, so yet another tool can mass-produce fake Facebook accounts using some of that information.

It’s now so easy to do that many Cambodian actors operate solo. Rio calls them micro-entrepreneurs. In the most extreme scenario, she’s seen individuals manage as many as 11,000 Facebook accounts on their own.

Successful micro-entrepreneurs are also training others to do this work in their community. “It’s going to get worse,” she says. “Any Joe in the world could be affecting your information environment without you realizing.”