US gains 0-0 draw at Mexico, in strong position to qualify

Home Sports US gains 0-0 draw at Mexico, in strong position to qualify 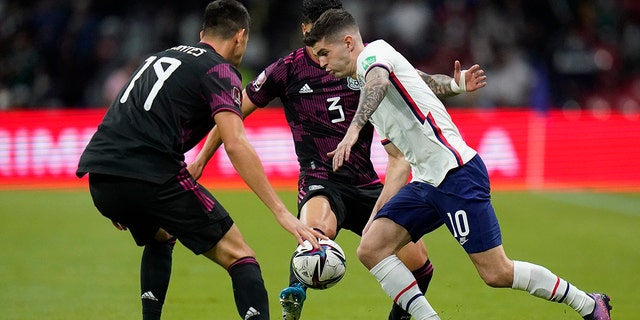 Christian Pulisic pounded the ground three times just past Mexico’s goal line after his point-blank shot was blocked in the 35th minute.

The United States was frustrated yet pleased with a gritty 0-0 draw on Thursday night in the thin air of a half-full Estadio Azteca. The point earned put the Americans in position to all but clinch a World Cup berth with a victory against Panama on Sunday night at Orlando, Florida.

“We put ourselves in a position to play on Sunday and win and go to the World Cup,” Pulisic said. “But of course I’m disappointed I missed a chance, and I would have loved to have won the game.”

The U.S. maintained second place in North and Central America and the Caribbean with 22 points, four behind Canada, and ahead of Mexico on goal difference. The top three nations reach this year’s World Cup in Qatar, and the No. 4 team advances to a playoff, likely against New Zealand.

With a victory Sunday, the U.S. would ensure that fourth-place Costa Rica could only pull even by winning its final two games. The U.S. has a plus-nine goal difference, the first tiebreaker, and the Ticos are plus-two following a 1-0 win over Canada. If Costa Rica fails to win at El Salvador and the U.S. beats Panama, which has 18 points after being held to a 1-1 draw by visiting Honduras, the Americans would clinch outright.

The U.S. closes on March 30 at Costa Rica, where the Americans have never won in qualifying.

“We’re getting close,” U.S. coach Gregg Berhalter said. “Positive disappointment, that’s how I would characterize it. The group is jazzed up. They’re psyched.”

Berhalter played his “A” team — minus five injured regulars — after debating whether to rest top players ahead of Sunday. He will face Panama somewhat depleted.

Right back DeAndre Yedlin and winger Tim Weah both were given their second yellow cards of qualifying and must serve one-game suspensions, Yedlin in the 26th for an unnecessary sliding tackle in the midfield on Edson Álvarez and Weah in the 39th for knocking over Raúl Jiménez from behind on a throw-in. The U.S. is short at right back with Sergiño Dest injured and Reggie Cannon sidelined following a positive COVID-19 test, and Berhalter said Shaq Moore already had flown from Spain’s Tenerife to join the U.S. group in Orlando.

Zack Steffen got the start over Ethan Hovath and came away with his second shutout against Mexico in qualifying, helping the U.S. extend its unbeaten streak over El Tri to four games, including three wins.

Pulisic was alone in front after Ricardo Pepi fed Weah wide and the winger got around two defenders for a cross. Sprinting toward goal with Johan Vásquez giving chase, Pulisic redirected the ball with his left foot from 7 yards only for goalkeeper Guillermo Ochoa to react quickly enough to block the shot off his ribcage.

Pulisic had another close call with an angled left-foot shot that Ochoa parried in the 49th for a corner kick.

Gio Reyna, the 19-year-old midfielder who had missed the previous 10 qualifiers with a strained hamstring, replaced Weah in the 60th minute and showed explosive speed. Reyna directed Kellyn Acosta’s looping pass in the 72nd minute to Jordan Pefok, who came in at the same time in place of Pepi, but Pefok misfired a left-foot shot and sent it wide from 6 yards.

Reyna dribbled half the length of the field in the 77th, starting about 10 yards from his own penalty area. He dashed right to evade a sliding Héctor Herrera, deked left to slalom past Vásquez, sprinted into the center circle and spun around Herrera again, outran Gerardo Arteaga, dribbled past Jiménez and cut left and then right to blow past Jorge Sánchez’s slide tackle. Only then was Vásquez able to knock the ball away, about 30 yards from Mexico’s goal.

Berhalter thought of Diego Maradona’s second goal against England in a 1986 World Cup quarterfinal played on the same field.

“I had visions of that when Gio was dribbling,” Berhalter said. “Unfortunately, he didn’t finish it off.”

After FIFA ordered Mexico to play a pair of home qualifiers without fans as punishment for homophobic chants during October qualifiers against Honduras and Canada, the Mexican Football Federation limited the crowd to about 47,000 in the 87,000-seat stadium and mandated spectators present a QR Code and identification for entry.

For much of the first half, two sections of several hundred American Outlaws in the upper deck were louder than Mexico’s supporters.

“I think everyone’s pretty pleased with the way tonight went,” Pulisic said. “Three points would have been amazing here, but we can’t get too greedy. They’re a great team in a difficult place to play.”

NOTES: Aaron Long and Erik Palmer-Brown entered in the 80th minute, the 37th and 38th American players used in qualifying. Palmer-Brown became the 114th U.S. player of the World Cup cycle, the 88th since Berhalter became coach in December 2018.