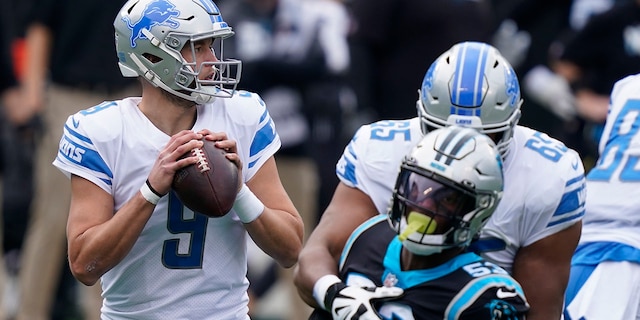 Even during a pandemic, there is at least one thing that remains the same: Thanksgiving football.

The NFL is back with three Thursday games to keep your appetite for the game full. The matchups get started at 12:30 p.m. EST and go through the afternoon into the evening and then into the night.

The Detroit Lions will host the Houston Texans, the Dallas Cowboys play the Washington Football Team, and the Pittsburgh Steelers host the Baltimore Ravens.

Here’s what you need to know about the games on your plate Thursday.

Detroit Lions quarterback Matthew Stafford looks to pass against the Carolina Panthers during the first half of an NFL football game Sunday, Nov. 22, 2020, in Charlotte, N.C. (AP Photo/Gerry Broome)

Dallas Cowboys wide receiver CeeDee Lamb (88) celebrates with teammates after catching a 4-yard touchdown pass during the first half of an NFL football game against the Minnesota Vikings, Sunday, Nov. 22, 2020, in Minneapolis. (AP Photo/Bruce Kluckhohn)

The Steelers nor the Ravens usually play on Thanksgiving but will find themselves in a matchup at night. The rivalry will continue as the AFC North is still in the balance even if the Steelers are undefeated this season.