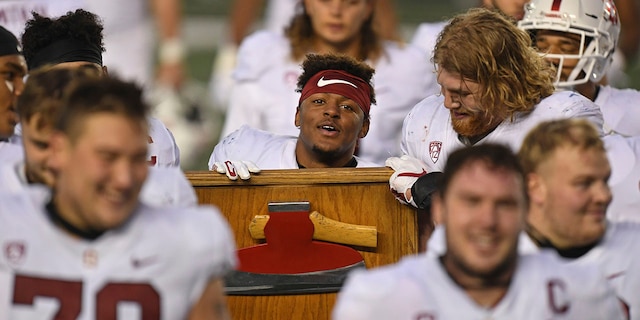 Former national security adviser Susan Rice was among those tuning in to The Big Game on Friday night and was elated to see Stanford edge California in the rivalry matchup.

Rice tweeted a photo of the game, along with a video.

“Congratulations to @StanfordFball. Here’s a personal tribute from one of your biggest fans!! Way to Return the Axe to its rightful home on The Farm @Stanford,” she wrote.

Rice attended Stanford. She served as the U.S. ambassador to the United Nations and national security adviser in the Obama administration.

The Stanford-Cal gridiron matchup is known as The Big Game, with the winner taking custody of the coveted Axe trophy.

Stanford won the trophy back thanks to Austin Jones’ two rushing touchdowns and Davis Mills’ 205 passing yards with a touchdown. The Cardinal blocked a would-be tying extra point in the final minute, which proved to be the decisive play.

It was Cal’s first home game of the season. It had been pushed back several weeks because of the coronavirus pandemic affecting whether games can take place. It was the first time any of the teams were coming into the game winless.

Stanford had a nine-game winning streak against Cal in The Big Game before it was snapped last year. The Cardinal now have wins in 10 of its last 11 games against the Golden Bears.

Next week, Stanford hits the road to play Washington and Cal hosts Oregon.