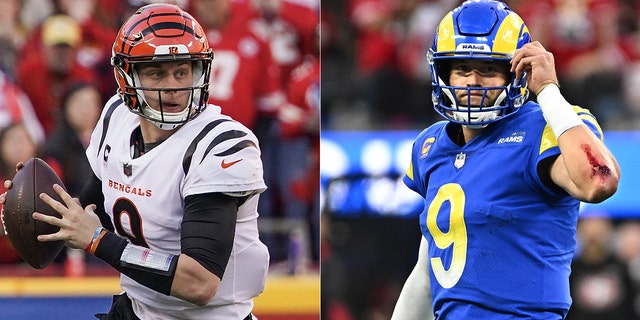 Super Bowl LVI will feature the Cincinnati Bengals and the Los Angeles Rams with two quarterbacks playing at the top of their game and both ready to win their first ring.

Joe Burrow and Matthew Stafford both had solid performances in the conference championship games and led their teams to comeback victories.

The Bengals were down 21-3 in the first half before Burrow found Samaje Perine for a 41-yard catch and run that got them to within 11 points before halftime. A big defensive stop closed the door on the Kansas City Chiefs doing any more damage before the first half. Burrow would have another touchdown pass to help tie the game with the Bengals and the team would win the game in overtime 27-24.

Burrow finished 23-for-38 with 250 passing yards, two touchdown passes and an interception.

The Rams were down 17-7 going into the fourth quarter against the San Francisco 49ers, and it was up to Stafford and the Rams’ defense to muster up a comeback. Stafford did just that.

He started the fourth quarter with a touchdown pass to Cooper Kupp – the second time the two players hooked up during the game. Los Angeles’ defense would stifle the 49ers throughout the rest of the game, leading to game-tying and game-winning field goals from Matt Gay. The Rams won 20-17.

SUPER BOWL 2022: WHAT TO KNOW ABOUT THE GAME

Stafford finished 31-for-45 with 337 passing yards, two touchdown passes and an interception.

Both quarterbacks will try to make history Feb. 13 when Super Bowl LVI kicks off.

Here’s a tale of the tape between the two star quarterbacks.

Burrow was born in Ames, Iowa, in 1996 but moved to Athens, Ohio, after his father accepted a job as defensive coordinator at Ohio University. Burrow was a top high school athlete who went to Ohio State but transferred to LSU. He’s coming into the Super Bowl listed at 6-foot-4 and 221 pounds. He comes from an athletic lineage. He revealed in 2019 his grandmother scored 82 points in a high school basketball game and his father and uncle both played football at Nebraska.

Stafford was born in Tampa, Florida, in 1988 but moved to Georgia and later Dallas, Texas, where he went to high school with Los Angeles Dodgers star Clayton Kershaw. He led his team to a perfect season in 2005 and attended Georgia after high school.

Burrow first attended Ohio State. He was with the Buckeyes while J.T. Barrett and Dwayne Haskins were the top two quarterbacks in the program. In 2018, Haskins won the starting job while Tate Martell served as the backup, and Burrow transfered to LSU. Burrow didn’t break out until the 2019 season, when he set the record for most touchdown passes in a season with 60 and had 5,671 passing yards. That season would propel him to the No. 1 pick.

Stafford, though failing to lead the Bulldogs to a national championship, was undefeated in bowl games during his collegiate career. He helped the team beat an upstart Hawaii squad in the 2007-08 Sugar Bowl. He finished with 7,731 passing yards and 51 touchdown passes in his college career.

Burrow finished his collegiate career as a national champion and a Heisman winner and could be the first quarterback to accomplish both and win a Super Bowl.

Both players were drafted No. 1 overall – Burrow by the Bengals and Stafford by the Detroit Lions.

Both quarterbacks have not been safe from trials and tribulations during their careers.

Stafford was drafted by the Lions and had battled through injuries throughout his career in Detroit. Though he had eight seasons of 4,000 or more passing yards and one season of 5,000-plus passing yards, he was only selected to one Pro Bowl. He earned the Comeback Player of the Year in 2011. He led the Lions to three playoff appearances but failed to win any of those games.

Burrow came into the NFL used to winning but was drafted by a team that was 2-14. His rookie season lasted only 10 games as he was sidelined with a torn ACL and MCL. He team finished 4-11-1 in 2020 and got the No. 5 pick of the draft. Instead of taking an offensive lineman, the Bengals selected his LSU teammate, wide receiver Ja’Marr Chase. Everything would change coming into the 2021 season.

The Rams acquired Stafford in a trade for Jared Goff in the offseason. It was one of the biggest moves Los Angeles could have made and it – so far – has paid off greatly. Stafford played in all 17 games for the Rams. He finished with 4,886 passing yards, 41 touchdown passes and 17 interceptions. Cooper Kupp has turned into an MVP candidate and the team got some reassurances when they signed Odell Beckham Jr. after Robert Woods went down with a season-ending injury. Beckham’s presence helped keep the offense open and allowed Stafford to thrive through the regular season and into the playoffs.

Burrow somehow managed to return for Week 1 despite the completely shredded ligaments. Burrow was also sacked a league-high 51 times during the 2021 season. Through all of that, Burrow somehow managed to get Cincinnati on top of the AFC North division. He finished with 4,611 passing yards, 34 touchdown passes, 14 interceptions and led the league with a 70.4 completion percentage. Burrow led the Bengals to wins over the Las Vegas Raiders, Tennessee Titans and later the Chiefs. To be the best, you got to beat the best and the Bengals certainly did that.

Burrow and Stafford will have the chance to end the droughts for both of their teams. The Bengals have never won a Super Bowl and appeared in two, the last coming during the 1988 season. The Rams last appeared in a Super Bowl during the 2018 season, losing to the Tom Brady-led New England Patriots. The team ended the 1999 season with its only Super Bowl title.

Super Bowl LVI is set for SoFi Stadium in Inglewood, California, on Feb. 13.