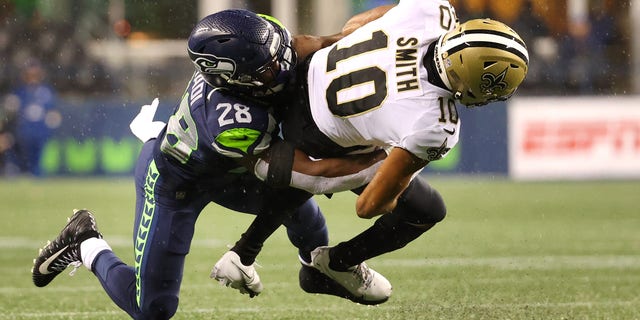 Things got testy between the New Orleans Saints and Seattle Seahawks during Monday Night Football but tensions were also high between quarterback Jameis Winston and receiver Tre’Quan Smith.

Both teams were tied at 10 in the fourth quarter when the Saints had an opportunity to score at a crucial 3rd-and-12. With four receivers out on the play, the ball was eventually batted down and the Saints were forced to punt.

Clearly not happy with the play, Winston was captured chewing out Tre’Quan Smith on the sideline. Smith, walking away, seemed to give it right back.

According to NOLA.com, head coach Sean Payton also gave Smith some pushback on the sideline, signaling the wideout might have been at fault somehow during the botched third down.

SEATTLE, WASHINGTON – OCTOBER 25: Tre’Quan Smith #10 of the New Orleans Saints is brought down by Ugo Amadi #28 of the Seattle Seahawks during the second half at Lumen Field on October 25, 2021 in Seattle, Washington.

During the postgame press conference, Wintson was asked about the exchange.

“Just communication, we had to be on the same page, and that’s it,” he said, adding: “When everyone gets to talking, I just want it to be me and him.”

Monday night’s game was Smith’s first of the season since returning from a hamstring injury. He finished with just one reception for 11 yards. The Saints beat the Seahawks 13-10.