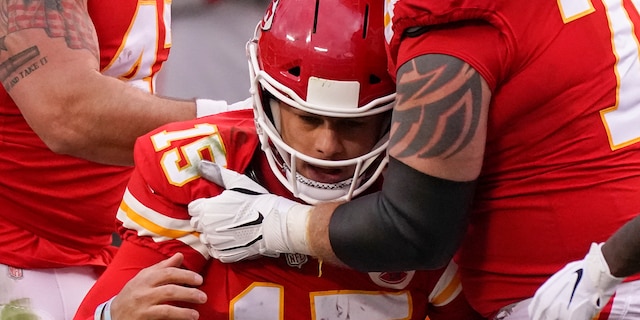 Patrick Mahomes is good to go.

The Super Bowl LIV MVP told reporters Friday he cleared the last stage of concussion protocol and will be able to play in the AFC Championship against the Buffalo Bills.

Mahomes was forced to leave the Kansas Chiefs ‘divisional-round game against the Cleveland Browns early after hitting his head on the ground on a tackle. He was helped up by his teammates but didn’t look like he knew he was in Arrowhead Stadium playing in a playoff game.

He was last seen heading back to the locker room under his own power but did not return. Chad Henne came into the game and threw a bad interception, giving the Browns some hope. However, Henne would redeem himself later in the game with a gutsy scramble and a game-ending completion.

Kansas City Chiefs quarterback Patrick Mahomes (15) is helped off the field by teammate Mike Remmers, right, after getting injured during the second half of an NFL divisional round football game against the Cleveland Browns, Sunday, Jan. 17, 2021, in Kansas City. (AP Photo/Charlie Riedel)

Chiefs coach Andy Reid told reporters earlier in the day that Mahomes only needed clearance from an independent neurological consultant and the Chiefs’ doctor.

Mahomes had been at practice all week and went through the reps, but couldn’t do much else because he was in the protocol.

Bills coach Sean McDermott told reporters that the team was preparing as if Mahomes was going to play.

“I guess at the beginning of the week we weren’t quite sure, and we really won’t know, I guess,” he said. “It’s probably trending in that direction, so that’s what we’re anticipating.”

Kansas City is one win away from a second consecutive Super Bowl appearance.