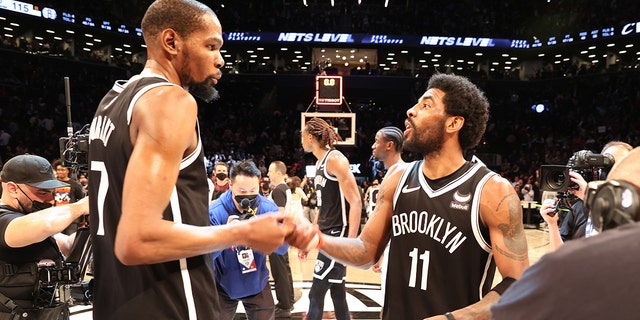 The Brooklyn Nets are reportedly navigating free agency as if they are bringing back Kevin Durant and Kyrie Irving next season, even as trade rumors swallow the organization.

Durant requested a trade from the Nets at the start of free agency last week while there was uncertainty over whether Irving would opt back into the final year of his contract.

Kevin Durant and Kyrie Irving during the Brooklyn Nets-Cleveland Cavaliers game on April 12, 2022, at the Barclays Center. (Nathaniel S. Butler/NBAE via Getty Images)

After the point guard opted in, that’s when Durant’s trade request came to light and Brooklyn reportedly began shopping around both players.

But nothing has come to fruition on either end. Durant has been swept up in trade rumors with the Phoenix Suns and Miami Heat while Irving has been mentioned as a possible piece to a deal to the Los Angeles Lakers for Russell Westbrook. NBA insider Shams Charania, of The Athletic, appeared on “The Pat McAfee Show” and suggested the Nets may keep both superstars.

Kevin Durant and Kyrie Irving of the Nets talk during the Cleveland Cavaliers game at Barclays Center on April 8, 2022, in Brooklyn.  (Sarah Stier/Getty Images)

“On the other hand, the Nets, they picked up T.J. Warren today. They’re making moves and they’re doing things this offseason in their mind the preparation and operation as if they’re bringing these two guys back next season and playing with these two guys,” Charania said.

“I think they’re open in dialogue and open to teams like Toronto, Miami, Phoenix, making offers but until they get that price threshold met – which I’m told is All-Star-type players, boat load of draft picks – this is what they’re telling teams, ‘We’re not going to move Kevin Durant until the price is met.’ So, we’ll see how this summer goes.”

Charania stressed that nothing is set in stone and hashing out a trade could take a while.

Kevin Durant and Kyrie Irving walk off the court after the Cleveland Cavaliers game on April 8, 2022, at Barclays Center in Brooklyn. (Nathaniel S. Butler/NBAE via Getty Images)

Ryan Gaydos is the sports editor for Fox News and Fox Business. Story tips can be sent to Ryan.Gaydos@fox.com.